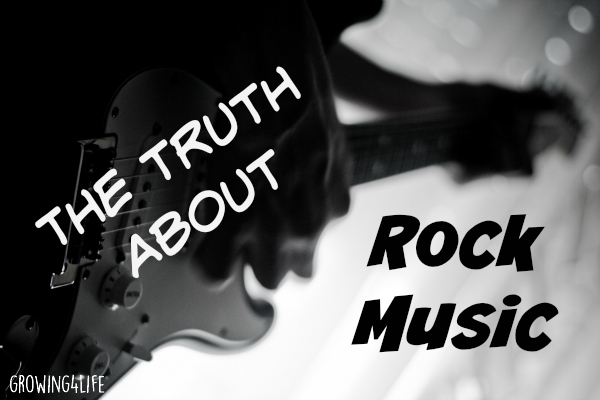 Wait! Before you write me off as being way out there, give me just a moment of your time. Please.

Let me first say that much of what I have learned these past few weeks isn’t really new to me. I had just conveniently located it to the very back of my mind where it wouldn’t inconvenience me. It is so disturbing and uncomfortable that it was just easier not to remember.

But then came a couple of Bible studies that required some investigation into the rock scene. And, suddenly, I found myself wading through all of this stuff again. Only in the last twenty-five years it has gotten so much worse that it is mind-boggling–and absolutely frightening.

In fact, I feel like I landed in a pit so full of satanic iniquity and such wicked depravity that some of the actual photos and footage that I saw in my research will be indelibly etched on the canvas of my memory forever–it was that disturbing and heinous.

Rock music has always had a satanic influence. It does not really take all that much research to figure that out. Just google the Beatles and Hinduism and you will see it almost immediately. They were very open about their Hindu activity and even secular websites confirm this. But, as wild as the 60s were, the society wasn’t quite ready for outright false religion and songs promoting open sex and drug use and so many of their song lyrics had double meanings and hidden agendas.

Of course, all the changes in the last 50 years have made hidden agendas and double meanings unnecessary. This has happened through a very systematic hardening of our consciences. And so evil and ungodly lyrics have been eagerly accepted by a fan base that doesn’t pay any attention at all to what they are filling their brains with.

(Again, as I mentioned in Love and Snakes–I find it not only inconceivable that so many Christians are  paying such little attention to the wickedness of this music, but I continue to be astounded that there are so few of us Christians sounding a warning and when we work up the courage to do so, we find ourselves marginalized, criticized, or ridiculed by fellow believers!)

I started my study on the Billboard website with some of the songs listed as Top Ten on the pop charts over the past month. What I found were foul, crude, worldly lyrics promoting all types of sin. While some were worse than others, not ONE was promoting God’s kingdom. All were instead varying degrees of darkness.

I then moved on to the artists themselves. Who were these people that were coming into our homes and cars on a regular basis through their music?

With the 80s influences of Madonna and Micheal Jackson– who were perhaps some of the first openly satanic artists to be played on the radio– the way was paved for many more to come. Recent rock stars such as Beyonce, Kesha, Katy Perry, Lady Gaga, Jay Z, Eminem, and Nicky Manaj (just to name a few), have filled the American culture with an abundance of ungodly, crude, and sexual lyrics and, even worse, very graphic music videos. This, of course, I suspected before I started doing my research. What rather stunned me however was the plethora of satanic symbols and images. As I studied, I found that many of these artists claim to have sold their soul to the devil or to be possessed by demons. This was by their own admission, recorded on video or found in reputable sources.

It’s funny because when I heard Lady Gaga sing at the Super Bowl the other night, I thought, “Wow, she has a really good voice.” Sure, she looked a bit strange but she wasn’t too way out there, looking almost normal. However, unfortunately for me, I was aware of who she really is and some of the images I stumbled upon from her concerts and videos are the most disturbing I have ever seen in my life. If Satan can show himself as an angel of light then I guess Lady Gaga can also sing beautifully, even though what she has represented over the past decade in our culture is of such hideous darkness it is almost impossible to comprehend.

So why do I share this here? On a blog dedicated to spiritual growth?

I write it here because I think most of us are absolutely clueless regarding the danger this music presents to our spiritual health. We just allow this music to play in our homes and in our cars and in the ears of our kids–never giving it a second thought. The tunes are catchy and for some reason that seems to be all we need for it to get our seal of approval.

It is so easy to fall to peer pressure in this area of music. I know that I, myself, was quite guilty of this. Years ago, I learned quickly that if I mentioned my concern about rock music, I would be called narrow-minded, ridiculous, uneducated, etc. etc. Eventually, especially as my kids grew into teenagers, I got pretty tired and I let my guard down just a bit. Oh, we were still really careful, but it was truly exhausting and I didn’t want to come across as too out there for my kids’ sake and so I conveniently moved all of this to the very back of my mind. I just tried to forget all I knew. It was just easier. At the time.

I would definitely go back and change that if I could.

But fast forward my life to just a few weeks ago when I found myself up to my eyeballs in the lewd depravity of the rock music industry. I just can’t even begin to describe how awful it all is. And maybe worst of all–how precious and beautiful young girls and boys, many of them Disney stars as youngsters, are morphed into larger-than-life rock musicians that promote everything God abhors and how so many of their fans–usually tweens and teens– just follow them down into the dark pit.

How can we stand by as soldiers of the Light and not sound an alarm??

God is light. We once walked in darkness, but now we walk in the marvelous light! We are to walk as children of the light, which means we are to not only turn away from works of darkness but we are to expose them (see verses below).

If this music is something that beckons you or someone you love, may I encourage you to do your own research? I think you will be more than a little alarmed and shocked at what you will find out. And may we pray for deliverance of ourselves and our families from the evil influence of this demonic music.

Ephesians 5:8-13-– For you were once darkness, but now you are light in the Lord. Walk as children of light 9 (for the fruit of the Spirit[b] is in all goodness, righteousness, and truth), 10 finding out what is acceptable to the Lord. 11 And have no fellowship with the unfruitful works of darkness, but rather expose them. 12 For it is shameful even to speak of those things which are done by them in secret. 13 But all things that are exposed are made manifest by the light, for whatever makes manifest is light.

John 8:12 —Then Jesus spoke to them again, saying, “I am the light of the world. He who follows Me shall not walk in darkness, but have the light of life.”

Acts 26:17-18— I will deliver you from the Jewish people, as well as from the Gentiles, to whom I now[a] send you, 18 to open their eyes, in order to turn them from darkness to light, and from the power of Satan to God, that they may receive forgiveness of sins and an inheritance among those who are sanctified by faith in Me.’

I John 1:5-7 —This is the message which we have heard from Him and declare to you, that God is light and in Him is no darkness at all. 6 If we say that we have fellowship with Him, and walk in darkness, we lie and do not practice the truth. 7 But if we walk in the light as He is in the light, we have fellowship with one another, and the blood of Jesus Christ His Son cleanses us from all sin.

I Peter 2:9-10— But you are a chosen generation, a royal priesthood, a holy nation, His own special people, that you may proclaim the praises of Him who called you out of darkness into His marvelous light; 10 who once were not a people but are now the people of God, who had not obtained mercy but now have obtained mercy.

13 thoughts on “The Truth About Rock Music”