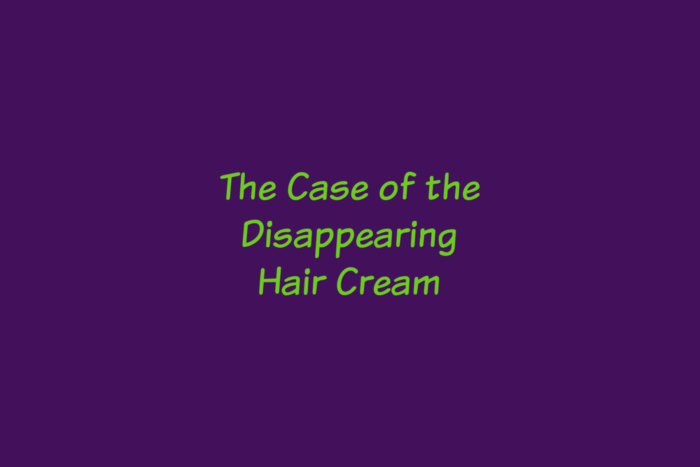 My eyes scanned the store shelves. Oh, no. My heart sank. Could it be they stopped making it? No, that couldn’t possibly be.

Let me back up just a bit. I have very thin, rather lifeless hair. My hair would definitely be one of things at the top of the list were I given the opportunity to change anything about my appearance. But many years ago–perhaps 15 or more–I had stumbled onto a texturizing cream that had worked wonders. I bought it year after year after year. Until that fateful day.

I asked the store clerk. She thought maybe they were just out of stock.

I went back several more times over the course of the next year and realized that it had happened. My hair cream was off the market. At that point, I purchased nine tubes (yes, nine!) off of Amazon and started on my search for a new, comparable product. But, time after time, I’d be disappointed. It would be inordinately sticky. Or too thin. It wouldn’t hold my hair enough. Or it would hold it too much. I was growing less and less sure that I’d ever find a replacement. This went on for a couple of years and my stock was growing dangerously low.

And then one day, just a few weeks ago, I was scrolling through an online store and came across a product that I thought might be worth a try. Why not? I added it to my cart.

After it arrived, it sat there for a few days. This shows you how little expectation I had that it would work. It was almost like I was stalling the disappointment.

One morning, I pulled it out and opened it up. It was a little sticky. I sighed, placed a dab of the white cream on my fingertips, and reached my hand up to my head and…it worked! It worked better than the original! I couldn’t believe it. Finally, I had found a replacement.

I am still so surprised when I use it and it works. It works for hours. It’s better than the original in every way.

Well, I’d like to tell you another story. Don’t get caught up in the details of the story. Please keep in mind that I am not telling you what your convictions should be. I am telling you my testimony so that you will see that God won’t give conviction without making it possible to experience victory. And that if you are filled with conviction then be sure to follow it through–and if you are smart you will do this much quicker than I did.

If you are a “music” person, this will make more sense to you. I love music. My life would be incomplete without it. I love all kinds of music–well, most kinds, anyway. I had to actually train myself to turn it off sometimes and learn to enjoy quiet.

As a college student, I listened to a variety of music, which included quite a bit of secular rock and pop. As I matured as a believer and became a mom, I began to realize that the lyrics of much of the secular music I was listening to was saying the complete opposite of what the Bible taught. It wasn’t what I wanted to teach my kids or fill my head with. I made the decision to eradicate most of that style from my life. (Which I have never regretted).

While I listened to classical and southern Gospel and jazz music while the kids were growing up, mostly what I listened to was of the Christian Contemporary Music variety (or CCM as it is frequently called). I had nary a hint of conviction about listening to this and was content to have this as part of my life for a very long time.

And then, several years ago now and through various avenues, God started to bring to my attention some concerns with this music. The lyrics were theologically wrong more often than not. The artists themselves were less than impressive when interviewed and often admitted to worldly lifestyles and bad theology. And, the truth of the matter was, if I listened to anything with a heavy rock beat, it would actually negatively affect my mood.

I remember often being angry about something and turning on a heavy rock song. Christian or secular, it didn’t really seem to make much difference. It matched my mood and would feed my anger. I vividly remember the day and exactly where I was when I realized that I needed to make a change. God had filled me with conviction that this music–no matter what the lyrics said–was not His music.

That led to ten or more years of me fighting against this conviction. I was basically addicted to CCM and the rock-style of music and, to be truthful, had no interest whatsoever in giving it up. Besides if I didn’t listen to modern music, what in the world would I listen to? What would even be left? I had already given up rock music and was viewed as really odd because of it. Did the Lord really desire I give up CCM, too? And was I really willing to make myself look even odder? Was I convicted over nothing? And yet the fruit of this music in my life wasn’t the best on many different levels: Teaching me incorrect theology, affecting my mood, and leading me towards the world rather then away from it. I had to admit this. Oh, how I vacillated back and forth for a very long time.

Finally, one day in the not-that-distant past, I said something like this to the Lord: “Lord, if it is Your will that I stop listening to this music, you will have to remove my desire. You will have to help me because I can’t do it on my own.” And I left it at that.

I had no instant answer. I still liked that style of music the next day. And the day after that. But a year or two down the road, a small miracle had taken place. That music had lost its hold on my life. I now was content to fill my ears with hymns and songs that didn’t need a heavy drum beat. I started listening to classical and instrumental much more often. While I still listen occasionally to a theologically correct CCM song or album, I have lost my passion for it. Now, I can take it or leave it.

And here’s the thing: I am a much healthier Christian for it. I even experience less fits of anger. I think rock music does something to our psyches. I can’t prove it. I can just share my experience. I do think it has been proven, actually, but that’s not my point.

My point for today’s post is to let you know that if God gives you conviction, it is for a reason. And the sooner we follow Him, the sooner we will be experiencing the wonderful benefits of yielding to the Spirit, separating ourselves from the world in that area, and growing in our sanctification.

So back to my first story. My new hair cream surprised me by being so much better than my old hair cream. Oh, I could still use the old stuff, but I much prefer the new one. I found something better to replace the old.

So, too, is the issue of music for me now. Oh, I can listen to CCM on occasion but I don’t really enjoy it very much anymore. God really did deliver me from my passion for it. I have no other earthly explanation.

When God calls us to give up something, we don’t spend our lives pining for it. We don’t long for it when we run into it again in the world. He actually takes away our hunger for it. And He gives us new and better desires. It is truly amazing! This is sanctification at work.

While I know this post wasn’t officially about music, I also realize that many of you won’t agree with my conviction about it. In fact, I imagine I will lose some readers over it. People feel very, very strongly about their music. It is one of the reasons I don’t talk about it that much.

However, if any of you reading this have started to have little niggling doubts about this modern day music that is labeled “Christian”, may I encourage you to start praying about it. And then start listening to the lyrics, comparing them to scripture. When the radio is on or you are listening to any song–secular or Christian–pay attention to what message is really filling your brain. Is it a biblical message? Or is it anti-biblical? Pay attention and be diligent in prayer. Ask the Lord to give you wisdom and guidance and then the strength to make a change if you are convicted to make one. He is faithful.

12 thoughts on “The Case of the Disappearing Hair Cream”