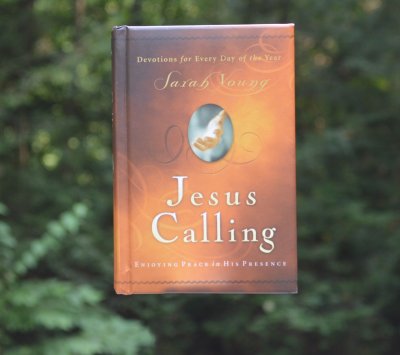 I recently came across this very solid article by Warren Smith regarding the book Jesus Calling and I want to pass it along to my readers. This author has provided ten very scriptural reasons as to why this is a very dangerous book (remember–the Bible is the only way we know truth from lies and genuine teachers from false teachers).

I know that, inevitably, some of you will be very upset with me for daring to imply that this book isn’t what it seems, but may I please implore you to at least read this article? We have to judge everything that comes our way using the light of scripture, including this book.

Here’s a portion of the article from WND–

In 2004, in one of her rare, carefully staged interviews, Sarah Young was asked by the Christian Broadcasting Network “How did you learn to ‘dialogue’ with God?” She answered that it was from reading the book “God Calling”:

“My journey began with a devotional book (‘God Calling’) written in the 1930s by two women who practiced waiting in God’s Presence, writing the messages they received as they ‘listened.’” (parentheses hers)

Also, in the original introduction to “Jesus Calling” that stood from 2004-2013, Young specifically praised “God Calling” as “a treasure to me.” However, “The Encyclopedia of New Age Beliefs,” published by Christian publisher Harvest House, describes “God Calling” as a channeled New Age book that was spiritually dictated by a deceptive spirit pretending to be the real Jesus Christ. In their lengthy “Encyclopedia” chapter on channeling and spiritual dictation, Christian authors/apologists John Weldon and John Ankerberg explain that channeling is a form of New Age “mediumship,” which the Bible clearly defines as a “forbidden” practice (Deuteronomy 18:9-12). Under a subheading titled “Impersonations of Christianity,” the authors describe “God Calling” as a New Age book “replete with denials of biblical teaching”8 that “subtly encourages psychic development and spiritistic inspiration under the guise of Christ’s personal guidance … and often misinterprets Scripture.”

Soon after Sarah Young’s endorsement of this New Age book was widely publicized in 2013, all references to “God Calling” were completely removed from all subsequent printings of “Jesus Calling.” Like the missing 18 and a half minutes from Richard Nixon’s Watergate tapes, “God Calling” suddenly disappeared from Young’s book. There was no explanation, no apology, no anything. But what was even more disturbing than their obvious damage control, was that Young and her publisher expressed absolutely no concern for the countless people who had already read or were currently reading “God Calling” because of Young’s previous endorsement. Nor was there any expressed concern that – thanks to Young – “God Calling” had been resurrected from semi-obscurity and had become a best-selling book in its own right. It was being printed in multiple editions by multiple publishers and was frequently featured alongside “Jesus Calling” in Christian bookstores and other retail outlets.

To this day, Sarah Young has yet to publicly renounce, much less even acknowledge, her previous involvement with and endorsement of “God Calling.” The Bible says we are to admit our mistakes – not cover them up (Psalm 32:5). And this is especially true when millions of people have been affected by those mistakes. We are to reprove and expose books like “God Calling” – not just edit them away without any explanation (Ephesians 5:11). Scripture makes it clear that in regard to issues like “God Calling,” we are to let our “yes” be “yes” and our “no” be “no” and that it is “evil” to try and avoid the matter by refusing to clarify one’s position (Matthew 5:37).

The fact remains that Sarah Young has stated that she was inspired by “God Calling” to receive her own messages from “Jesus” and described the channeled New Age book as “a treasure to me.” Until she clearly specifies otherwise, we can only assume that where her treasure is, her heart is also.

“For where your treasure is, there will your heart be also.” (Matthew 6:21)

Finish reading the article here to find nine more reasons why this book is not only heretical but also very dangerous.