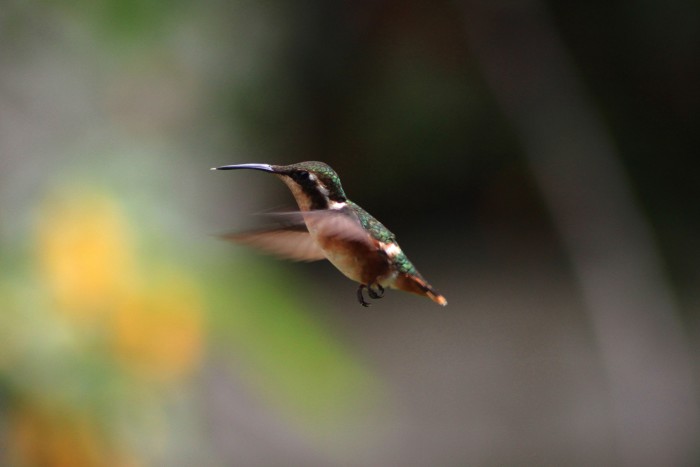 I have had the strangest thing happen to me this summer. Not once or even twice– but three times! But let me start back at the beginning.

Earlier this summer, I could tell that my eyes were getting worse. I was sad to admit it, but the bottom line was that I had to increase my magnification in my reading glasses. Which meant I needed a new pair.

A few days later, I was out shopping and came across a cute display of polka-dotted reading glasses. I had a hard time choosing from the fun colors, but finally settled in on the red ones. I don’t usually pick such a bright color for glasses, but since I was just going to be using them at home I decided that it wouldn’t really matter.

The new glasses were quite comfortable and so they quickly became my go-to pair for my summer mornings on our porch swing, as I would spend some time with God, reading His Word and praying.

About a week or so after I got the glasses, I was reading when suddenly I heard the familiar whir of hummingbird wings. I eagerly looked up for my little familiar friend and saw her at one of the ivy geraniums in the hanging basket closest to me. I watched with interest until, quite suddenly, she started flying towards my face. She was about a foot away from me, when suddenly it dawned on me! It was the red glasses! I quickly removed them and the bird flew away.

About a month later, the same thing happened again.

And then, just on Friday, I heard the familiar whirring once more as the bird flew directly towards my head. I really wanted to see how close she would come, but I just couldn’t bring myself to take the chance of having my eye damaged by a hummingbird! I know it sounds silly, but when you are in the moment, it’s such a natural reaction to protect yourself. As she moved closer than ever before–within just a few inches of my face–I removed the glasses.

So why did this hummingbird keep coming towards my red glasses? Well, quite obviously, it was because they were red. If you know anything about hummingbirds you know that they love red flowers. I am assuming the little bird got a little mixed up and thought my glasses were a strange type of delectable flower. Can you imagine how disappointed she would have been if she would have actually tried to imbibe my glasses?

You would think that the hummingbird would have realized that just because something is red doesn’t mean that it’s worthy for consumption.

Of course, we often do the same thing.

We see something that is called “Christian”, it looks like it’s Christian, and we even have the added bonus of hearing well-meaning Christians rant and rave about it. And so we buy it. We consume it. And it changes our view of God.

I am thinking of books like The Shack* or Jesus Calling*, unbiblical books that have no basis in scripture but make us feel really good.

When we read books like this (these are just two of the most popular–there are so many others), we aren’t fed real food, but are instead consuming fake food. And, unlike the hummingbird with the glasses, the fake food tastes pretty good going down. It makes us feel special and gives us a perception of God that we like.

But if we compare it to scripture, we will see that these books do not hold truth.

Of course, in order to do that, we need to know and study the Word. We cannot spot the false if we don’t know Truth. I would guess that biblical illiteracy is the main reason so many of us Christians have such a hard time staying on the straight and narrow today. In this world of outrageous soundbites and instant everything, quiet and routine Bible study seems so old-fashioned and maybe even a little boring to some of us.

Can’t you see how clever Satan is? If he can keep Christians out of the Word of God then he has rendered us quite ineffective. We are like waves tossing to and fro, going one direction, then the next, never really knowing if something is really biblical or not. And because we don’t have the solid rock of the Word beneath us, we fall for books and teachers that are not teaching truth.

Jesus warns us that this is to be expected in Matthew 24:23-24– “Then if anyone says to you, ‘Look, here is the Christ!’ or ‘There!’ do not believe it. For false christs and false prophets will rise and show great signs and wonders to deceive, if possible, even the elect.

There will always be — and have always been– false teachers. One of our most serious duties as believers is to study the truth in the Bible and then to use the insight and wisdom gained there to discern good from evil. We do this for all things secular and religious. The label “Christian” should not mean an automatic stamp of our approval, but instead should make us even more wary.

Oh, how I wish that our culture wasn’t filled with so many spiritual land mines. It’s frustrating. It’s especially frustrating when godly Christians defend books that aren’t biblical. Many well-meaning people love the books I mentioned. And yet, if we do any study at all (see below) we will have to admit that these books are not based on the biblical God but, instead, on some man’s imaginations of a warm,fuzzy god that is much more palatable to our rebellious hearts.

“Red glasses” (false teachings) absolutely abound in our culture, don’t they? How critical it is to keep ourselves fed on the truth of God’s Word so that we can discern the false.

4 thoughts on “The Red Glasses”