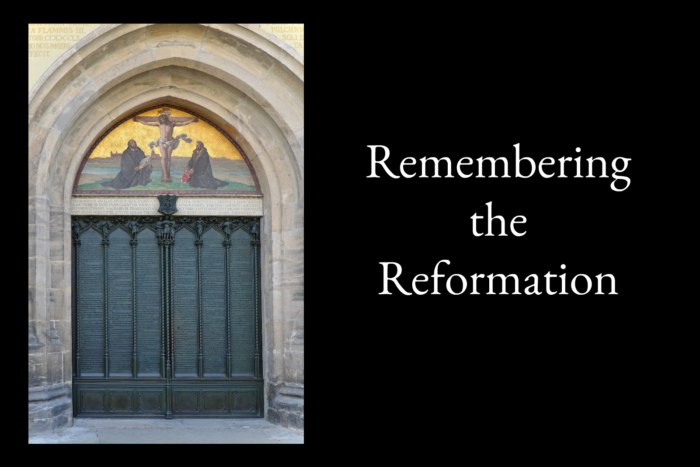 On October 31, 1517, Martin Luther allegedly nailed his 95 theses to the door of the Wittenberg church. I use the word “allegedly”, because there is actually some debate about exactly how it all happened. What we do know is that Martin Luther did clearly present 95 theses as a challenge before the Catholic church, which officially began the period of time we know of as the Reformation.

During the rule of the Roman empire, we know that Christians were viewed unfavorably. In fact, they were dreadfully persecuted and even martyred under certain emperors. They were thrown to lions for sport while the bloodthirsty Romans looked on; tied in bags with serpents and thrown into the sea; lit as torches for Nero’s parties, along with many other inconceivable tortures. But, surprisingly, during this time, the Church grew. Instead of the persecution functioning as a deterrent to keep the church from growing, it worked in the opposite way. People were attracted to a faith that kept a soul at peace during even the most horribly unthinkable circumstances.

And so it comes as no surprise that Satan came up with a Plan B: If you can’t beat them, then join them to eradicate and extinguish from within. The Roman Emperor, Constantine the Great, would be the instrument he would use to do this. It was under Constantine’s reign that, in the year of 313, Christianity was decriminalized. Eventually it would become the official state religion.

But was this true Christianity? A look at historical facts will reveal that it wasn’t. First, we will find that Constantine himself gave no proof of being a Christian. He continued on in his pagan practices and lifestyle. It would appear that he made this move to Christianity for political reasons only. And, second, you will find that Catholicism has an uncanny and unsettling resemblance to pagan religion of old. And so we can be certain that even from its inception, this state religion called “Christianity” was actually a deadly mingling of paganism and Christianity that became an accepted–but deceptively false– religion that was simply not (and still isn’t) biblical Christianity (Read this article for specific examples). This can easily be proven by comparing its dogmas and doctrines to scripture (read this article for more information). If you want to know how this all came about, you will find this short video to be a well-researched explanation—Know Your Enemy: Roman Catholicism.

It is extremely important that we come to a study of the Reformation with the knowledge that the Roman Catholic system is a false, satanic system. This gives us the background we need in order to do an accurate study of church history.

(Please keep in mind that I am judging the system of Catholicism and not any individual’s salvation. God, in His grace and mercy, may save someone who is caught up in that false system. I do believe that a true believer in the Catholic church who studies the Bible will eventually recognize the discrepancies and choose to leave).

From the point where Constantine validates this false Christianity, we find a church that becomes all-powerful in the lives of its parishioners—demanding things from them in life, as well as falsely teaching that they can control what happens to them after death. Many of Martin Luther’s 95 theses are specifically targeted towards the unbiblical teachings of purgatory and indulgences. We also find during this time the persecution of true Christians. In fact, we see the beginning of papal persecution, in earnest, around the 11th century. Foxe’s Book of Martyrs puts it like this:

Disregarding the maxims and the spirit of the gospel, the papal church, arming herself with the power of the sword, vexed the church of God and wasted it for several centuries, a period most appropriately termed in history, the “dark ages.” *

It started with the Waldensians and went on to include other pockets of true believers throughout the next several centuries, including many martyrs during that terrible time known as the Spanish Inquisition. (It would later include the persecution of the Huguenots in France and the Anabaptists in Germany.) This persecution included familiar names from this time such as John Wycliff and Jan Hus, as well as countless unknown names.

These records and other historical accounts of these groups and individuals makes it clear that, while Catholicism (which was false from its inception) dominated and controlled the lives of the general population, there were always those who sought the Truth. There were always those who fought against the false system. True Christianity did not disappear during the Dark Ages.

The common thread that drew all of these forerunners of the Reformation together was a commitment to the authority, inspiration, and inerrancy of the whole Word of God in its totality. This same thread runs through all of the Reformation, throughout all of Church history, and continues to be the same common thread that ties those of us together who desire to stay true to biblical faith in a world (and church) that has seemingly gone mad.

And so there is a brief– and hopelessly incomplete–history of the Church before the Reformation. It is my hope that this study will give you a deeper appreciation for the Word of God and the critical place it has played in all of Church history. It is also my desire that it will cause you to reflect on the pivotal place the Bible continues to play in this day and age, in the mainstream church and within our own churches.

We can see that Satan has tried all through the ages, and in many different ways, to twist, manipulate, and destroy God’s Word. We know this is because it, alone, is our revelation from God in this Church age. It is our only anchor for true faith and sound doctrine. We can also see that it is the Word that drew (and continues to draw) people back to true and pure faith. Keep this in mind as we continue our study.

Next time I will endeavor to give a general outline of the Reformation’s most important events.

Please note: I had a suspicion when I set out to do this series on the Reformation that my outline for posts could change. I will make the changes accordingly on the introduction page, so that each post can be clicked on from there.

Long Before Luther: Where was the Gospel Before the Reformation? By Nathan Busenitz

The Fire that Fueled the Reformation by Nathan Busenitz

Know Your Enemy: Roman Catholicism by the Fuel Project

What Is the Origin of Roman Catholicism @GotQuestions.org

How Was the Gospel Preserved Throughout the Middle Ages? @GotQuestions.org

Fox’s Book of Martyrs by John Foxe (free for Kindle!)

Constantine the Great and Christianity @Wikipedia

5 thoughts on “Remembering the Reformation: Before the Beginning”