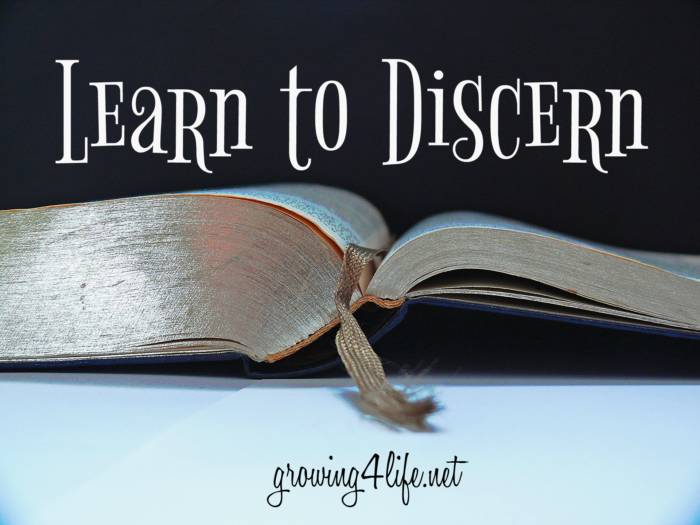 So some of you are going to really hate today’s post. You may decide that I’m a little crazy and never read anything at Growing4Life again. But I’m willing to take that chance. Mostly because I have seen this all play out in my life and in the lives of others around me. I will share about that a bit further on in the post. But here is my premise–

When we fill our minds with worldly entertainment, we deaden our consciences.

Let me explain. Sometimes I wonder how so many who call themselves Christians cannot see what is going on within the church. How can they not understand how ravenous wolves–posing as sheep–are changing the very mission and vision of the church?? As I was thinking about this the other day, I realized that it’s because many of them have so deadened their consciences, that they aren’t even willing (or able?) to call sin sin. Not only can they not tell the difference between true and false, but they are starting to fudge and rationalize about the differences between right and wrong. And when we lose our ability to discern right from wrong, our ability to discern what is true from the false has already left us.

1. It keeps us from our Bibles. While this may not be true 100% of the time, it is certainly often true. How many times have you heard someone say that don’t have time to read the Word but they will somehow have had time to watch TV?

2. It keeps us immersed in the goings-on of the world. When we think of worldly entertainment, we often think of the bad things, but I would submit to you that even the news and sports can steal our affections if we aren’t careful. While these things aren’t bad in and of themselves (most of the time), they will keep us immersed in the culture and, instead of separating from the world (as we are told to do in James 1:27 and James 4:4) we become fascinated by it.

3. It changes our values and hardens our hearts. I can’t tell you how many people have told me they can watch anything they want on TV because they know right from wrong and it doesn’t affect them. That they can listen to worldly music espousing sex, drugs, and alchohol because they aren’t going to ever do those things. Besides a stance like that begging the question why any believer would desire such entertainment (why would we–as a believer–want to fill our lives with the things God has clearly said He hates? Galatians 5:19-21), it also does have to be acknowledged that these things do change our values. They make us less sensitive to sin and harden our hearts.

4. It makes us more susceptible to needing the world’s approval. When we become immersed in the world the approval of the world can be all-consuming. When we love the world, we want to be loved by the world. But this, carried out to its fullest, will keep us from salvation. In John 12, this very thing happened, when we are told that some of the Pharisees believed but they so feared man’s opinion, rather than God, that they did nothing. John 12:43 simply puts it like this: for they loved the glory that comes from man more than the glory that comes from God. When we fill our minds with the world, we become much less interested in truth and much more interested in popularity.

5. It keeps us from caring about what matters in life. Entertainment is meant to entertain. Its goal is to distract us from real life for a little while and give us some refreshment. It is not a bad thing in and of itself. But we have become so enthralled with being entertained that we are distracted from our real lives much of the time. With our smart phones, our tablets, and things like Netflix and Youtube, we are constantly entertained. Many of us can’t even stand in a line at a grocery store or sit at a booth in a restaurant without pulling out our phones. This has exponentially compounded our interest in the trivial, while eliminating interest in the serious stuff of life at the same time. How many Christians do you know who ever discuss God? Or heaven and hell? Or the Bible? When serious matters do arise, most arguments are based on popular opinion rather than the Word of God. I believe this is in much part due to our obsession with entertainment.

So why do I say this? What proof do I have? Let me share three different testimonies about this–

First, I want to share something my brother, Pastor Dean, has shared with me. Shortly after college, he made two decisions. He stopped watching football on Sunday afternoons and instead read the Word. And, second, he removed all rock music from his life (including Christian rock). He credits these two decisions with changing his life completely. He says it was like withdrawing from a drug (if you have ever tried to give up rock music, you will find that it is extremely addictive) but that it was a life-changing decision. These two decisions not only strengthened His walk with the Savior, but also deepened his love for the Word and his hatred for the world.

Second, I want to share my own testimony. Mine is a little more like one of those jagged lines that goes up and down and all over the place. While I have always been conscious that worldly entertainment has great potential for evil in my life, I have not always been as careful as I ought. And I have had stages in my life where it has drawn me into its snare. And let me say this: It does change me in all of the ways listed above. I have seen these things in my own life. I know it is true.

And, third, I want to share the testimonies of two of my children. Both have told me this at two separate times. But let me back up a bit. When my kids became teenagers, we loosened up our standards a bit. Oh, not near so much as most of their friends, but we didn’t want them to look like complete losers and not be aware of anything in the world and so we caved. At that time we allowed secular rock into our home, as long as it didn’t have “bad lyrics”. We regret that choice. Even if one song of a particular artist doesn’t have bad lyrics, the others probably do. And, to add to that, the artists’ lifestyles are rarely anything we want modeled. About five years ago or so, I just started pleading with God that my children would love righteousness and hate evil. And He has answered this prayer in incredible ways! One of those ways was that two of my children decided–on their own–to eliminate secular music from their lives. And both have told me (in two separate conversations, without the other one’s knowledge) what a difference this has made in their own discernment and spiritual walk with God.

You have to know this: What we fill our minds with does affect our discernment. But there is good news! We can reawaken our consciences! It is not too late. If we start eliminating or drastically reducing (in the case of things like news and sports) the world’s entertainment and filling our minds with the Word of God, we will find our consciences will get back to work, informing and enlightening us about not only what is right and wrong, but also about what is true and false.

Okay, so now I have given you several ways our conscience is affected by worldly entertainment and I have given you three real life examples of how this has happened. As you read, you probably found yourself in one of four places and I’d like to speak to all four.

First, you may be one of those who doesn’t really have strong feelings about entertainment. You may like to watch a show or two, but you aren’t addicted. You may have a pop station on in your car but it’s just there. I would like to encourage you to continue to purify your life and to deepen your desire to please your Savior and to worry less about being “cool” in the eyes of the world.

Second, you may be one who is truly addicted to Netflix binges or your smartphone or to rock music. You realize you should change but you just don’t really want to. You enjoy your addiction and to change it now seems completely overwhelming. I want to suggest to you that you start praying that God would give you the desire to change. Or you may know you need to change and want to start now. Pray for strength and guidance. You cannot do this alone. God is faithful and He will answer these prayers!

Third, you may be someone who thinks I am completely crazy. This post makes you genuinely angry and you honestly believe that I am wrong. If you are one of these, then I ask you–beg you–to go to God’s Word to research what I am saying. Turn away from the viewpoints of popular authors or speakers and turn to the Word of God before you make your final determination.

And, fourth, you may agree with me. You may have witnessed this dynamic in your own life. (If that’s true, I’d love to hear your story. Please share by commenting below.) I would ask those of you in this group to share this unpopular message with your family and friends as the Lord gives you opportunity. So many of us Christians love the world. But this love is stunting our growth and keeping us from discerning. It is removing our effectiveness as a witness for Christ and it is making us so vulnerable to wolves who are invading the church in droves now. If you see this and you believe it, please don’t be afraid to say it. This is the time to be brave and speak up!

God bless you as you continue to learn to discern. Be in the Word, basing all your views on what you find there. And take all your concerns regarding the learning process to the Lord in prayer. He is so faithful and He will answer.

18 thoughts on “Learn to Discern: Reawakening the Conscience”