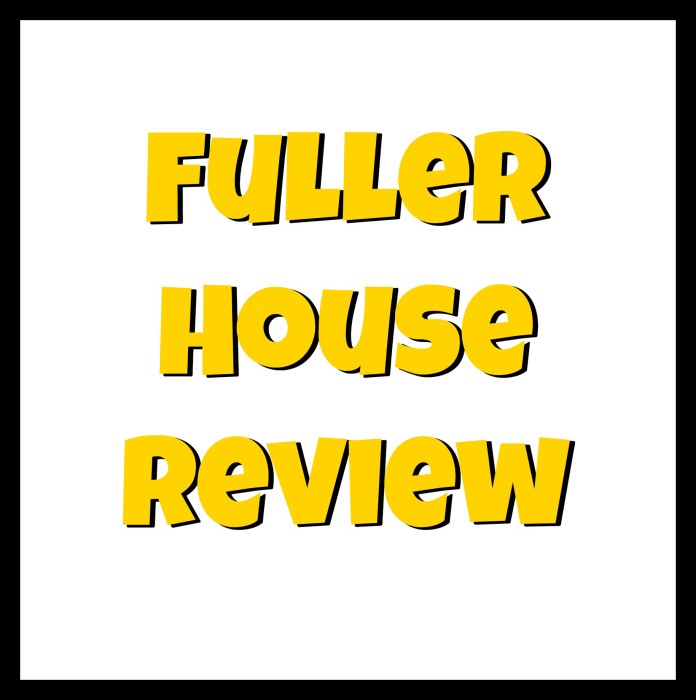 A few weeks ago a new show called Fuller House hit Netflix. After hearing mixed reports about the new show from many Christians, I decided to sit down and watch a couple of episodes myself.

Let me preface this by saying first that, yes, our family did watch Full House. And yes, even so long ago, there were some things in that show that shouldn’t have been there. They were subtle and vague but they were there.  And we Christians–myself included–overlooked them. The show was cute. It was mostly wholesome and family-friendly. We still watch the show occasionally.

a) It was advertised as a family show.

b) Candace Cameron, an actress who has declared she is a Christian very openly, is on the show.

c) The original show was pretty clean and family-friendly, overall.

But times have changed. A lot. And I should not have had such high expectations.

As I watched a grown-up Stephanie make a crude joke about her barely covered breasts on this series advertised for “families”, my heart sank. This was not for Christian families. It was for a culture that has become totally obsessed with sex.

My heart sank further as I watched. After watching two episodes, I made the choice not to continue watching the series. However, others who continued watching shared with me that future episodes have D.J., played by Candace Cameron, getting drunk, using bad language, and dressing inappropriately. The fact that Candace does these things and also claims to be a believer should be rather disturbing.

Now before you start rationalizing why she may or may not have chosen to do these things as an actress, please don’t. I don’t care why she did them. The fact is she shouldn’t have done them. She shouldn’t even be on a show that contains them.

Because the Bible says–

Ephesians 5:8-11: For you were once darkness, but now you are light in the Lord. Walk as children of light 9 (for the fruit of the Spirit is in all goodness, righteousness, and truth), 10 finding out what is acceptable to the Lord. 11 And have no fellowship with the unfruitful works of darkness, but rather expose them.

James 1:27: Pure and undefiled religion before God and the Father is this: to visit orphans and widows in their trouble, and to keep oneself unspotted from the world.

These are just two verses. There are so many more verses that not only encourage but command Christians to live a sanctified and holy life that is separate from the world. What do we Christians think “the world” means exactly, if not its sexual crudeness, its bad language, and its lusting after wealth, power, and a good time?

I have no idea why Candace Cameron made the decision to be part of such a show. She may have really good motives. We all make mistakes and she is in the lime light, with hers for everyone to see. I am not judging her personally, but this does not change the fact that she has made a poor choice to participate in a show that is inappropriate for families. And the plain fact is that she will drag a bunch of well-meaning, undiscerning Christians with her into believing this kind of entertainment is okay.

It is not okay.

What have we come to that this is accepted for family viewing by Christian families? I know this show is mild compared to many on TV. And probably some of you are rolling your eyes about now. I can almost hear your muttering and grumbling as some of you reflect on how ridiculous you think I am being.

And, honestly, I can understand why. It is because most of us Christians are like the proverbial frog in boiling water, accepting more and more and more worldliness, until we are up to our eyeballs in the filth of this culture, right along with everyone else.

But when do we say enough is enough? What will be disgusting enough to make us turn the TV off? When will we value pleasing our heavenly Father more than we value our own desires?

Look, life is about choices. And this includes what we allow in our homes on that box. The TV in and of itself isn’t evil. But we have a grave responsibility regarding what is played on that screen.

I’ve made many bad choices when it comes to that box. More than I can count. In fact, I almost made another one yesterday.

I sat down to watch a movie I’ve seen many times before. It’s one of my favorites from the 90s. As I started watching, they used my Lord’s name in vain time after time in the worst way possible. And that’s when I realized–I couldn’t keep watching this.

I turned it off. The temptation was to rationalize as to why I could keep watching and I did spend a few seconds doing so, but then–

I turned it off.

Let’s stop joining this pagan culture and enjoying its fruit, but instead be the ones that stand against it, striving to live holy and righteous lives in this perverse generation.