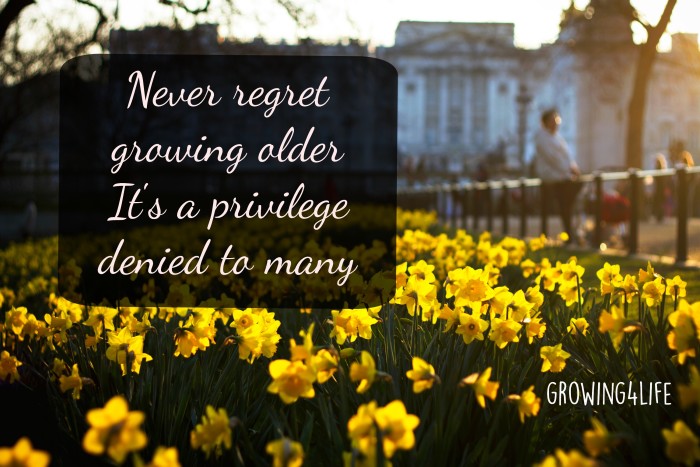 I could almost hear the little voices from the past. One child asking a question, another one needing a drink, all of them laughing and sometimes fighting. The normal family stuff. The large expo building I was in echoed with memories. Years ago, when the kids were all younger and we home-schooled, we had made many memories there as we set up for a big garden show each year.

I found myself swallowing a bit of nostalgia as I remembered. And, once again, I pondered this thing called time.

How could it possibly have gone so fast?

In a few weeks I will have officially lived for half a century. Half. A. Century. And yet, in my head, I just don’t feel that old. I was talking to a dear friend of mine who is turning 75 this year. And she said the same thing–she just doesn’t feel that old. Time just keeps passing, but inside we don’t feel like we are aging. Of course, while our minds try to fool us into believing that we aren’t really aging, our bodies seem to take great glee in reminding us that we certainly are.

It’s funny. I used to think that fifty was so OLD. And I guess if you are reading this as a twenty or thirty-something you are thinking that same thing right now. But then there may be a few eighty-somethings reading this and to them, fifty doesn’t sound all that old. But maybe none of that even matters.

Maybe it’s how we redeem whatever time we have been given. However long that is.

I am not sure if it is my upcoming birthday or my realization of how quickly time passes, but the death of country singer Joey Feek last week really hit me hard for some reason. I never heard of her before her illness. I was not a diehard fan of her and her music. But her story showed up on my Facebook feed a few months ago and since then I’ve seen some of the posts on the beautiful blog her husband was writing as they walked through this journey of cancer.

And then on March 4 her life here on earth was over. She was 40 years old. She had two grown daughters and one baby girl, a 2 year old.

Around that time I had been starting to groan a little inside that my 50th birthday was moving ever closer. How could I possibly be 50? But her death stopped my negative thoughts and changed my perspective. I have had ten wonderful years with my family that she will never get. I have been able to watch my babies grow up. I have watched countless soccer and basketball games. I have had the honor of watching three of my four kids get married. And the excitement of hearing that my first grandchild is on the way. Joey Feek will never have those things.

Many years ago–perhaps when I was twenty-something, I was browsing through a Hallmark store and found a little plaque that said these words:

Never regret growing older
It’s a privilege denied to many

At that point, my 50th birthday felt like it was light years and a lifetime away. In fact, I doubt I spent much time contemplating it at all. But for whatever reason, I picked up that little plaque and it still sits on a dresser in our bedroom. And it has reminded me through the years of the blessing life is, no matter what age we are.

Oftentimes when I write a post like this, people will write and tell me that 50 isn’t so bad, so let me assure you that it is not the actual age that is of any concern for me. I look forward to this new era of my life. Instead, it is the fleeting nature of time that I am still working my brain around. It’s not that I am dreading what is ahead of me, it’s that I am stunned and a little saddened by what I am leaving.

It reminds me of when we decided to move out of the first home we owned. Even though we were headed to a wonderful, new house, it was still sad to leave our little rancher where so many wonderful memories had been made. It had been our home for nine years and had rung with laughter and crying and arguments. It had witnessed birthday parties, Christmas mornings, and a myriad of home school days. Even though we were moving to a home much better suited for the needs of our growing family, there was still a touch of sadness that hung over that day.

And that’s just how it is with change. Even good changes often bring a little sadness with them. But life is not stagnant and it does keep changing.

And so that means that my milestone birthday is just around the corner. But that’s okay. Because I am just thankful to be alive. Every day I am here on earth is an opportunity to serve my Savior and to love my family. Having the opportunity to have done that for 50 years is a privilege! And I guess we should treat it as such.

So if you, too, are reaching a milestone birthday this year, let’s do away with the black balloons and gag gifts. And, instead, let’s celebrate! God has been good and we have been blessed. Lord-willing, we will have more birthdays for which to thank Him.