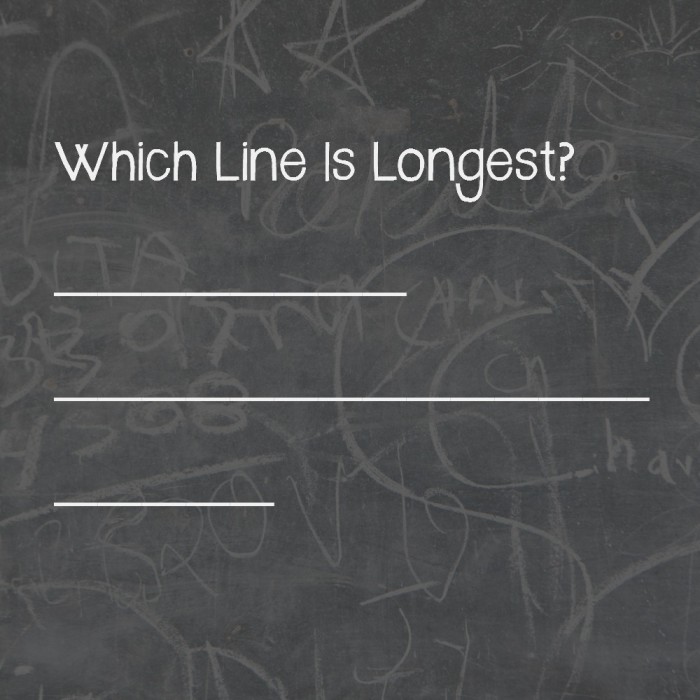 If I stood completely alone in my stand for Christ with no fellow believers to be found anywhere, would I continue to stand? If I was rejected and abandoned by family, friends, and co-workers for my faith; If I was mocked and scorned and persecuted, would I cave?

Our pastor once told the story of The Line as part of his sermon. I am going to paraphrase it here–

There was a college professor who one day came up with an interesting little experiment to try on his classes. He showed different lines on a screen in front of his students. The lines were very obviously different lengths. When he pointed to the longest line, he asked how many of the class thought this was the longest line. (Now remember, it was very obviously the longest line). Only one student raised his hand. As he looked around him, he became hesitant and slowly pulled his hand back down to his side.

What the student didn’t know was that this had been a set-up. The professor wanted to know how many would raise their hand confidently at the objective truth in front of them, even if they were the only one.

75% of the lone students caved.

Now doesn’t that help us understand the state of the church a bit more clearly?

And forget the kids for a second. What would you have done? I would say that I don’t care all that much about man’s praise, but when I think about that scenario, I think even me, at my stage in life, may have questioned myself. We are so caught up in the herd mentality that we have lost site of what matters. We so loathe being singled out, pointed at, and ridiculed that we do everything possible to avoid it–even if it means compromise.

And it’s getting harder and harder to stand. There used to be some tolerance for people who believe the Bible to be the inspired and infallible Word of God. Now there is very little–even from people who call themselves Christians. This change in our culture certainly gives us lots of opportunities to stand firmly for Christ– or to not stand.

The thing about compromise is that once you do it once, it becomes easier and easier. For solid Christians who actually know the Word of God the first step into the murky waters of compromise feels very uncomfortable. But it gets easier and easier and if we aren’t careful, we are surrounded and immersed in it and don’t even realize it.

Jesus tells us in John 15:18-25 that the world will hate us. That we should expect this. We find similar thoughts in 2 Timothy 3:12, I Peter 4:12-14, I John 3:13. In fact this theme is so woven throughout the scriptures, that we can come to the conclusion that if we aren’t persecuted and hated by at least some of those we come in contact with we may not be walking with God the way we should be.

This is very opposite of what you hear today, isn’t it?  Instead we hear that peace and unity are the signs of a “good Christian”.  Of course, if we are hated, it should be because of speaking truth. We never want it to be for the unkind way we speak truth or for promoting our own selfish agendas couched in “Christianese”. This is how Christians get such a terrible reputation.

It’s a convicting challenge that requires constant testing of our own hearts. If Satan can’t get us to compromise then he instead tempts us to stand for the truth in an unloving, arrogant way. We can never let down our guards. As it says in I Peter 5:8–

Be sober, be vigilant; because your adversary the devil walks about like a roaring lion, seeking whom he may devour.

Hmmm. I got a little off-track there for a moment. Let’s go back to the story of the line. Are you a little worried, like me, that you wouldn’t have the courage to raise your hand and stand for the truth all by yourself?

I remember as a teenager being so concerned about this. I would hear stories from the {former} USSR about people who would be shot or sent to Siberia for their faith and worrying that I would cave if I should ever face that same thing. But God gave me great comfort in two ways regarding this. First, in the promise that no matter what we face, His grace will be sufficient–

And He said to me, “My grace is sufficient for you, for My strength is made perfect in weakness.” Therefore most gladly I will rather boast in my infirmities, that the power of Christ may rest upon me. (I Corinthians 12:9)

We will get the grace we need when we need it and not a moment before.

And, second, I take great comfort in the life of Peter. Isn’t it great encouragement that Peter–the man who denied his association with Christ three times (John 18) wasn’t rejected by Christ, but instead went on to do wonderful and amazing things for the Kingdom–even dying for Christ in the end? We should take great encouragement in this. For even one of Christ’s very disciples struggled with this and yet, in the end, stood strong and firm!

I hope these things encourage you, too, because I think our opportunities to stand alone are going to become more and more frequent. It is sobering and actually quite frightening. But it’s not impossible. And–as my pastor says–there is always a remnant–a remnant of those of us who believe the Bible wholly and fully. Praise God! We are never truly alone, even though it may feel like it for a moment.

Many of you are part of that remnant. Let’s encourage one another as we face the unknown. Let’s put the foolish arguments that don’t matter aside and unite in our commitment to God and His Word. Let’s stand boldly–no matter the cost.

4 thoughts on “The Line”