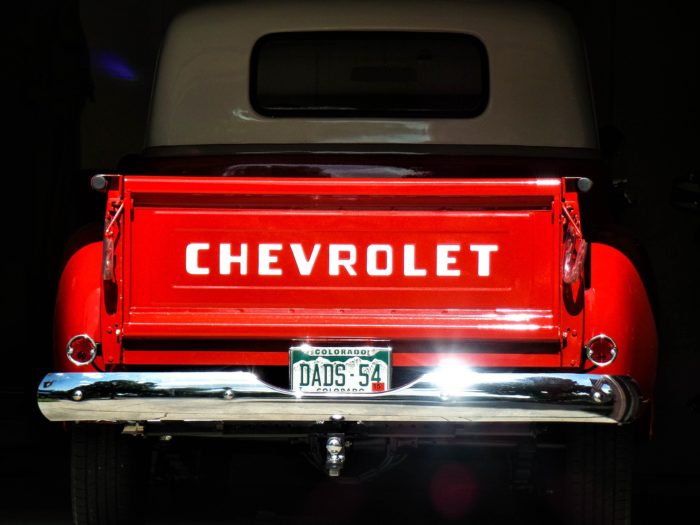 I have no idea when my husband decided that he is a GM guy. That is short for General Motors for any of you who are not familiar with car abbreviations. But somewhere along the way he decided that trucks made by General Motors were his favorite and, since then, almost every truck our company has owned over the past thirty years has been a GMC or Chevy. And believe me when I tell you that we have had a lot of trucks come and go over the years. I can remember one Ford that had a short-lived stay here and a couple of Dodges.

Some men are Ford guys or perhaps they are staunch Honda or Toyota fans. Some guys don’t really care. As long as they have a car, they are happy. But for those that care, they generally really care.

The other day I saw a beefed-up Ford diesel truck with an older guy behind the wheel. As I watched him take a right turn from across the intersection, I thought, “That guy really loves his truck.” Lots of men love their trucks. And they are extremely loyal to their brand of truck. When they need a new truck they will buy the same brand of truck again.

Men will often do the same thing with sports teams. It doesn’t matter how awful the season was or who was drafted, they will continue rooting for the same team. They are diehard fans.

This is called loyalty. Or allegiance.

And it made me wonder. Are we Christians as loyal to the Word of God as a man is loyal to his truck brand or his favorite sports team? I know this sounds shallow and ridiculous. But, seriously. A man will passionately talk about these things, praising them, discussing them, and spending many precious hours dedicated to them.

Do we show our loyalty to the Word of God in the same way?

Oh, we read it. We take it to church. And we say that we live by it. But how loyal are we, really?

I ask this because–

Over the recent years, I have noticed a disturbing trend. Something clearly unbiblical will come on the scene. Perhaps it is a book that is mostly biblical but contains flagrant and critical discrepancies when compared to the Word of God. At this, many people will flee their loyalty to the Word and, instead, be loyal to this human author. Or perhaps it is in the area of entertainment, where, suddenly we become loyal to our own selfish desires rather than the Word. We hear people say things like this–

“This book helped me. I know the author isn’t biblical in all areas, but it was really a blessing to me.”

“Wasn’t that post great? Sure, I know the author isn’t biblical in all areas and they aren’t solid, but I can just pull the good from the bad. Not a big deal.”

“I can go to see that movie or watch that TV show. Sure, it goes against everything God hates, but it’s just entertainment, so it doesn’t matter.”

These statements say that I am more loyal to myself or another human being than I am to the Word of God. That my allegiance is greater to my own desires and pleasures than it is to God.

My guess is that a few of you are probably growing a little irritated by now. You claim that you can read any author and just pull the good from their works. Or you can watch or listen to sinful stuff and not be affected. And while I could debate with you over your conclusions, I have one intrinsic question:

Why do you want to?

Seriously, are we really so prideful to think that we won’t be subtly swayed in an unbiblical direction by an author who gives us 95% truth but fills their book with 5% lies?

Do we love the world so much more than we love God and His Word that we would blatantly spend hours listening to and watching entertainment that is filled with the things the Bible clearly states God hates?

I confess I have been so confused over this for a very long time. People who claim to love God but fill their hearts and minds with materials and resources and entertainment that attack, ridicule, malign, and falsely define Him.

It is far more incongruous than a GM guy buying a Ford. And, believe me, even that would make me scratch my head.

When we decide that we are more loyal to authors, scientists, preachers, or entertainment than we are to the Word, we open ourselves up to being easily swayed by false teachers and worldly philosophies. While none of us will ever perfectly eliminate these things from our lives, it is important that our allegiance always be, first and foremost, to God and His Word. For the Bible is our foundation. And when we start chipping away at it, which is what we see going on in an unbelievable scale in both the world and the church, the Christian faith will become null and void.

May we–you and me–hold fast to the Word of God, no matter what goes on around us. Study it. Learn it. Memorize it. So that we may withstand the wiles of the devil. May our loyalty be always to the Word.

How firm a foundation you saints of the Lord,
is laid for your faith in His excellent Word!
What more can He say than to you He has said,
to you who for refuge to Jesus have fled?

2 thoughts on “Who Has Your Loyalty?”