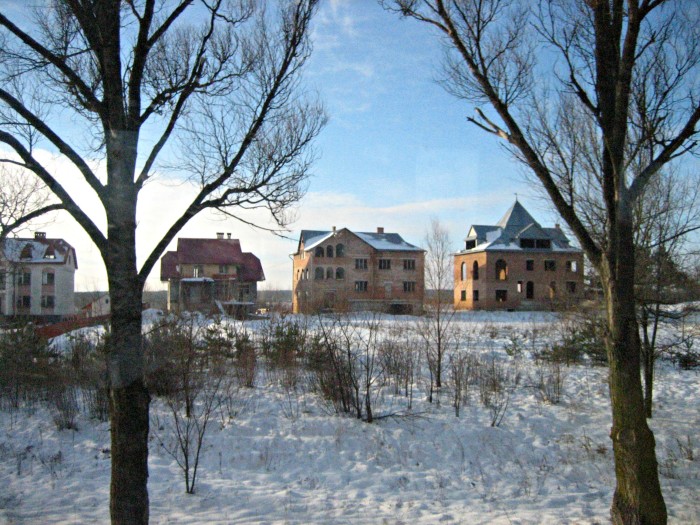 As we traveled through the Ukrainian countryside, I took in the scenery with amazement. For there, dotting the countryside in great numbers, were unfinished houses. Some of these brick structures were only half-built, but most looked almost finished, slowly fading in the Ukrainian sunlight as they waited for owners to fill them with life.

When I expressed my wonderment at this unusual sight– for there were many of these houses, not just a few– whoever I asked just shrugged their shoulders and said that the owners ran out of money. Apparently, after the Soviet Union broke apart, these bricks and other building supplies were available at deeply discounted prices and so lots of people started building these beautiful homes. But a functioning house is much more than the lumber and bricks of its shell. And so funds ran out and the owners walked away.

Because they did not count the cost.

I was reminded of this incident a few weeks ago in our Sunday School class. We are doing the Radical series by David Platt and he was talking about Christianity as Jesus defines it in the Bible.  It is very different from the cultural Christianity that demands nothing– that requires no sacrifice– that only needs a prayer to declare oneself as officially in the Lamb’s Book of Life. He used the following quote by John Stott. Actually, this is a bigger portion than he used, but it’s all so good, I wasn’t sure what to eliminate–

Jesus never concealed the fact that his religion included a demand as well as an offer. Indeed, the demand was as total as the offer was free. If he offered men his salvation, he also demanded their submission. He gave no encouragement whatever to thoughtless applicants for discipleship. He brought no pressure to bear on any inquirer. He sent irresponsible enthusiasts away empty. Luke tells of three men who either volunteered, or were invited, to follow Jesus; but no one passed the Lord’s test. The rich young ruler, too, moral, earnest and attractive, who wanted eternal life on his own terms, went away sorrowful, with his riches intact but with neither life nor Christ as his possession…The Christian landscape is strewn with the wreckage of derelict, half built towers—the ruins of those who began to build and were unable to finish. For thousands of people still ignore Christ’s warning and undertake to follow him without first pausing to reflect on the cost of doing so. The result is the great scandal of Christendom today, so called “nominal Christianity.” In countries to which Christian civilization has spread, large numbers of people have covered themselves with a decent, but thin, veneer of Christianity. They have allowed themselves to become somewhat involved, enough to be respectable but not enough to be uncomfortable. Their religion is a great, soft cushion. It protects them from the hard unpleasantness of life, while changing its place and shape to suit their convenience. No wonder the cynics speak of hypocrites in the church and dismiss religion as escapism…The message of Jesus was very different. He never lowered his standards or modified his conditions to make his call more readily acceptable. He asked his first disciples, and he has asked every disciple since, to give him their thoughtful and total commitment. Nothing less than this will do”
― John R.W. Stott, Basic Christianity

I guess the deeper my relationship grows with Jesus Christ, the more I realize that much of what passes today as Christianity isn’t really true Christianity. This is such an unpopular message. And I can understand why! Because true Christianity costs us something. Yes, it’s a free gift, but it costs everything. But when our hearts are changed by the power of the Holy Spirit, our lives are transformed. This isn’t a begrudging obedience to God’s laws — a list of do’s and don’t’s that plague us and keep us from having any fun.

Instead our stone hearts start beating with love for the Father and following His will not only becomes a pleasure, but our main priority.

This brand of Christianity sounds so foreign to most of us. Even as I write, I realize this. And I wonder– what does this mean for all of us in this day and age? How does this kind of Christianity look in a Western culture where indulgence and comfort reign supreme?

All I know is that I am not walking away from an unfinished house. I will keep working and building until I die or my Lord returns. Yes, it’s hard. And yes, there is sacrifice required. Great sacrifice. There is turning away from the world, being unpopular with people, doing what’s right at all costs. It means we love and forgive even when we don’t feel like it. It means we stand alone if we have to. And that our time and resources are no longer our own. This does not sound all that appealing, does it? But when we read in the New Testament, we can’t help but conclude that this is what it’s all about.This is what Jesus demands of His disciples.

And, honestly, the costs for us are really nothing compared to so many of our Christian brothers and sisters. I can’t help but think of them as they give up homes, loved ones, and even their lives for the sake of Christ. I can’t help but wonder how comfortable, indulged America would respond in the same situation. Oh, may we be found faithful if (or shall I say when?) that happens to us!

If you have started your house of faith but are ready to walk away, please don’t. If the enemy of your soul is throwing arrows and you are just so tired, hang in there. Open your Bible and read Ephesians 6, put on your armor, and beg the Lord for strength to keep going. Let’s keep our eyes focused on eternity instead of the here and now. And, remember, God’s great power is shown best through our great weakness. You aren’t alone. Don’t give up. Keep building.