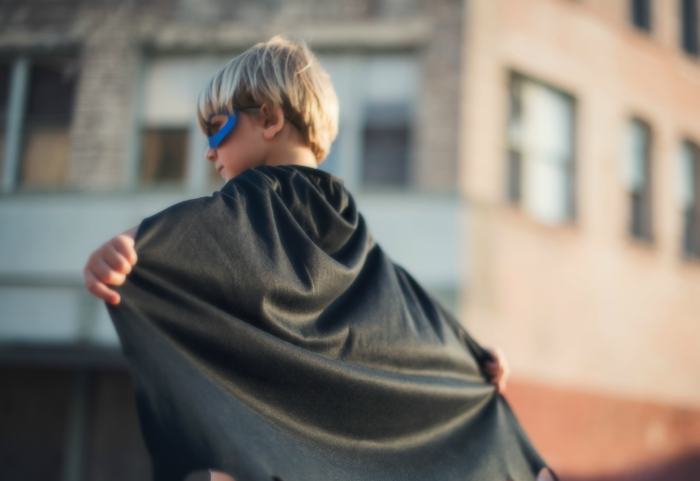 A friend of mine and her husband have wisely decided that their family will not celebrate Halloween*. As they have been going out and about town these past few weeks her four-year-old has frequently been asked what he will be dressing up like for trick-or-treating. His consistent answer was that he wouldn’t be dressing up because “Mom says we only celebrate holidays that have to do with Jesus.”

But one day a lady asked him this same question and his answer was remarkedly different.

This peaked his mom’s interest, as he doesn’t even know any superheros. She stood back to watch where this was going.

“Ummm, well, it’s red and blue…” His mom realized he was describing a mask and cape that he had at home.

But the little guy wasn’t done yet. He added this, “And yeah, I am going to wear it to our Halloween party.”

She says, “Oh, a Halloween party?”

He proceeded to enthusiastically tell her that he would be eating cake and having fun there.

Mom didn’t say anything but later she asked him why he had told that lady he was dressing up and talked about a Halloween party.

He said something like this: “Well, I just got tired of telling people I don’t dress up and that we don’t celebrate Halloween and so I just decided I am going to tell them I am going to be a super hero and that way people are more excited.”

This little boy had done what so many of us do. We tell an expedient lie to avoid consequences. While we adults tend to justify these lies in our minds the little boy, like most children do, had been quite honest about why he did it. He didn’t feel like dealing with the questions anymore so he just told them what they wanted to hear.

Can you think of the last time you did this same thing? How often do we say something dishonest in order to avoid a hassle and/or ridicule?

I would say it’s pretty often. It’s actually pretty ingrained into this culture anymore. It’s hard to gauge people’s true opinions because they generally aren’t saying them. Oh, I know there are lots spouting off online and that’s not good either. But there are lots and lots of Christians who are just not saying their honest opinion about the things that matter because they don’t want the heat. It’s just easier to go along with the crowd or to make up an answer that people like.

Specifically, I can think of a few ways that we Christians do this in our homes, workplaces, and churches–

(uhhh, it was okay. I really liked the part where…)

Did you finish that report today?

(“oh, yes, I started it” while it’s laying in an unopened folder on our desk)

Will you be home by six?

Do you like my new hair style? (I hate this one. It’s so hard to navigate!)

And husbands will relate to this one: Wives ask, “do you think I’m fat?”

It’s just easier and much more expedient to lie most of the time. We avoid hurt feelings, fights, arguments, derision, and mockery when we do this. Surely God doesn’t have a problem with it, right?

God condemns lying very strongly in His word. Here are just a few of the many verses–

The wicked are estranged from the womb; They go astray as soon as they are born, speaking lies. Psalm 58:3

He who works deceit shall not dwell within my house; He who tells lies shall not continue in my presence. Psalm 101:7

Lying lips are an abomination to the Lord, But those who deal truthfully are His delight. Proverbs 12:22

Therefore, putting away lying, “Let each one of you speak truth with his neighbor,” for we are members of one another. Ephesians 4:25

Do not lie to one another, since you have put off the old man with his deeds, Colossians 3:9

Inevitably, when we discuss lying, the subject of Rahab comes up. She lied to protect God’s servants and was blessed for it (Joshua 6:17; Hebrews 11:31). Dare I point out the obvious?

Rahab was not lying to protect herself.

While I am not prepared to discuss what anyone should do in her circumstances, I think it is pretty clear that lying to protect our own selfish interests is clearly sinful. And, if we are completely honest, we are generally not protecting anyone other than ourselves when we lie. So to use Rahab (or even the Christians who hid Jews during the Holocaust) as our excuse to lie would be a pretty ridiculous cop-out.

God hates lying lips. We know this from His Word. And yet we all so easily fall into lying. Because it’s just easier. Perhaps it is time to carefully examine our words for how often we are speaking the truth.

*Should a Christian celebrate Halloween? I’ve vacillated through the years on my response to this question. Recently, though, with the rise of occultic activity and the growing fascination with all things dark (zombies, witches, vampires, magic) I would agree with my friend and would avoid celebrating this holiday. A good question to ask is this: Does this holiday glorify God or the devil? The obvious answer to this should give us a clue as to whether or not we should participate in this holiday.

2 thoughts on “The Expedient Lie”