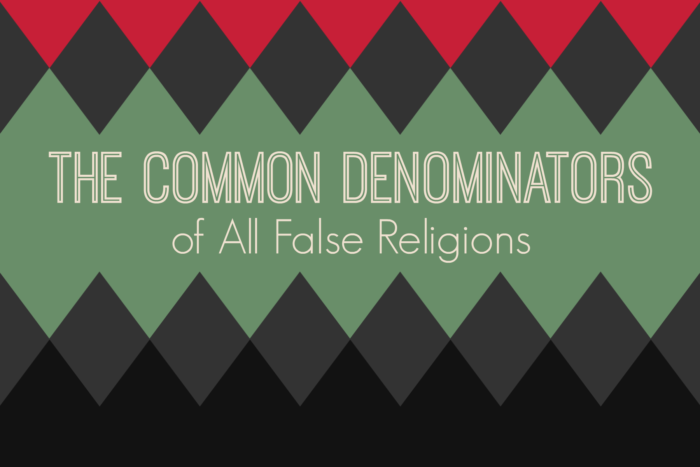 What are the commonalities that all false religions share? If we understand these things, it will help us to easily determine if anyone’s religion is true or false–even those that would use the vernacular of scripture (God, Christ, etc.) It is important to remember that using the name of Jesus does not give any religion a free pass. Oftentimes–in fact, most times–they are not talking about the Jesus of the Bible.

My husband is currently teaching a series on world religions in our Sunday School class at church. He gives the history and then shows us how they differ from what the Bible teaches. Personally, I am finding it extremely helpful. I never really knew what these religions believe or how far off they were from scripture.

Today he talked about Jehovah’s Witnesses and something really struck me.  Let me give a bit of background first: The founder of the J.W. religion, Charles Taze Russell, just decided–as an 18 year old–that he didn’t care for what the Bible said and so he decided to just make up a religion of his own. Using verses out of context and twisting them all round, he came up with what would become one of the main cults of this current age, impacting at least 255 different countries across the world.

One of the things he didn’t like from the Bible was its teaching that men who rejected Christ would go to hell. And so he just changed it. In his religion there is no hell.

And this is what struck me: All false religions create a god of their own making and to their own taste.

As I thought on this further, I realized that they have more than that in common. Let’s take a look at four of these commonalities–

First, and foremost, they rely on works. A false religion always, always, always teaches that one must do something in order to attain heaven. Oh, some will say that it’s grace plus works (such as Catholicism and Mormonism) but there are always works involved. Whether it’s the meditation of the Buddhist or the idol worship of the Hindu or the five daily prayers of the Muslim or the praying to Mary or the Saints of the Catholics or the required door-to-door witnessing of the Mormons or Jehovah’s Witnesses (just to mention a very few of the many, required works of these false religions)–all false religions require works. One cannot possibly be saved without them.

In contrast, consider the wonderful news of scripture! Ephesians 2:8-9 could not make it any clearer–

For by grace you have been saved through faith, and that not of yourselves; it is the gift of God, 9 not of works, lest anyone should boast.

It is through faith in Christ alone that we are saved by God’s grace alone. No works. Nothing we can do. It is a free gift. Christianity is the only true religion and we can know this because it is the only religion where God reaches down and saves us of His own accord.

Prideful man can hardly fathom that he is so sinful that there is nothing he can do to reach God. And so he strives and works and wrongly thinks he’s looking pretty good in God’s eyes–when all he would have to do is simply repent and accept God’s gift.

Secondly, false religions turn to human wisdom and create a God of their own making. Instead of turning to the reliable Word of God, they turn to their own thoughts, visions, dreams, and minds to create and develop their own religion. Search the roots of any false religion anywhere and you will find a man who one day decided that he knew more about God than anyone else. A prideful man who thought he knew the truth.

This is one of the main reasons I just love the Word of God. Our faith is based on the Word, not on any man. The Bible was written by many men as the Holy Spirit directed them (2 Peter 1:21). And yet, even with so many different human authors, by God’s miraculous plan, this one book, upon its completion, was consistent and cohesive in every way. A never-changing guide for believers throughout all the ages. We can rest confidently on its truths and doctrines. God has given us His truth within its pages. He is King of the universe and it is our duty to obey. It is outright rebellion to determine that we don’t like this doctrine or that one. We are simply his subjects. All people are–whether they want to admit it or not.

Of course, in a culture obsessed with independence, most people are not going to bow to anyone–even God. No one is going to tell them what they can and cannot do or where they can and cannot go. And, so along with the outright rebellion of the world, we also have those who claim to be Christians changing and twisting long-held doctrines of the scripture. It’s under the umbrella of “evangelicalism” that we now hear of major doctrines being changed to cater to “felt needs”. Perhaps these changes are also being made to cater to the evil world we live in rather than bear the brunt of their hatred, should we disagree.

Thirdly, false religions always by-pass, minimize, or ignore the cross. The Bible teaches us that our salvation come through the sacrifice of  Jesus Christ on the cross. There is no salvation without His sacrifice. There is no other way for us to be reconciled to God (I Timothy 2:5). But false religions make very little of the cross. Some bypass it completely and change who Jesus was. They say He was a prophet or a wise teacher. Others will give lip service to the cross but the thrust of the religion is in works. Jesus isn’t enough. When you want to see if a religion is false, look at the place of the cross.

This is one of the ways we can know that the current false religion that goes by the name of “Christianity” is a false religion. They have completely minimized the cross and the Word of God (more on that below) in favor of mystical experiences. It is based on feelings instead of facts; on personal experiences instead of actual reality; on relativity instead of absolute truth.

Fourthly, false religions always by-pass, twist, or minimize the Bible. Since the inception of biblical Christianity (the book of Acts is the beginning) the focus of this true religion has been on the Word of God. As mentioned above, we will find all we need for life there (2 Timothy 3:16). The Word is living and powerful and a discerner of our hearts (Hebrews 4:12). It is there we read about God’s plan for man’s salvation (John 3:16). Without it, we are powerless creatures vulnerable to any direction a false religious leader may take us.

This is why you will find that all false religions either bypass the Bible altogether (such as Buddhism and Hinduism), override its doctrines by providing sacred documents of their own (such as Mormonism and Jehovah’s Witnesses), or minimize scripture by teaching its followers that they cannot and should not read the scriptures for themselves (such as Catholics and Amish).

This last one is so critical. This is because, while a false religion that looks fairly close to Christianity can still fool us on the first three for a little while, this fourth one becomes clear immediately. Whenever the focus is taken off of the Word or the Word is taken out of context to meet some speaker or author’s agenda, our “antenna” should immediately go up. This is usually the first area of compromise.

We have seen this in the mainstream church over the past several years. Does the Bible really teach ______________? We don’t like that so let’s remove it. We need a new “interpretation” for a more advanced culture so let’s change _________________.  Pulling verses out of context, we hear the false message that God wants you to be healthy and rich.

Over and over we are seeing this. So if you want to know if someone is caught up in a false religion (even if it is called “Christianity”) look here first. What is the place of the Word in their lives? What is its place in their church? In the books they are reading? I can almost guarantee you that its place will be minimal–if it has any place at all.

I hope that this post will help you be able to spot a false religion more easily. It really is pretty easy to discern if we look at these four things. What is not easy at all is reconciling ourselves to the truth that people we love may be caught up in these false religions. That’s the hard part.

Know and study the Word as you stand for Christ and a true biblical faith. Don’t ignore or back down, but lovingly show others how their false religion doesn’t line up with scripture as God gives opportunities. This is how we plant seeds of truth.

4 thoughts on “The Common Denominators”