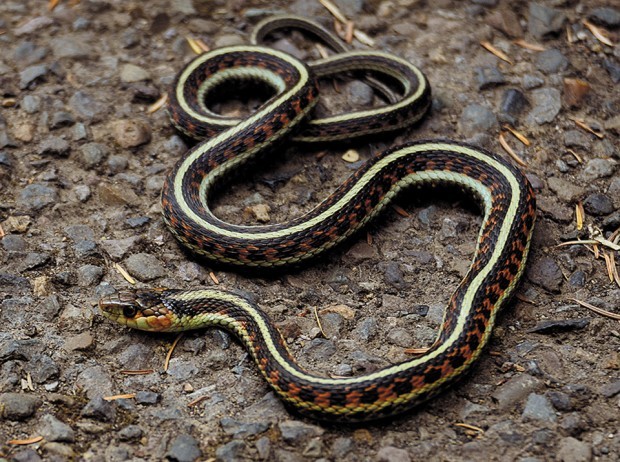 Your initial thought as you read the title of this post may be that this is some philosophical observation regarding the original snake in the original garden. The title kind of lends itself to that interpretation. But if you were looking forward to that, you will be disappointed. This particular snake was in my garden. Let me tell you the story–

It was a beautiful day and I was excited to see how my garden was doing. It had been a brutal winter –much more so than usual– so I had been keeping a close eye on my fruit plants to see what had returned (amazingly, all but a couple of the blueberry bushes survived! And, honestly, those two bushes didn’t look all that healthy before winter arrived…) I had also planted some tomatoes and peppers a few days before, so I was checking on them, as well.

I walked across my yard in anticipation — and in blessed ignorance. You see, I had never once in the years I had been gardening even seen a snake among the square foot boxes my husband had built. I was almost upon the garden, when my eye caught some movement.

The 4′ (or was it longer??) striped garter snake must have been as surprised as I was! As soon as it became aware of my presence it slid away so fast that my eyes couldn’t even follow it. At that point, I realized that I had no idea where its den was or where it regularly spends its days.

Now. This was certainly a new and rather dreadful thing to ponder. It meant that in my garden–at any moment!– I could come upon one of these detestable creatures.

Of course I knew there were a few harmless snakes about our property. This was not a surprise to me. But I did not know that they spent any time in my garden. I thought they kept themselves hidden far away from the areas where I live and work. That day I was made aware that this assumption was rather naive and demonstrated my ignorance.

And the next time I approached that garden it was with my eyes wide open and the expectation that there may be a snake there.

In fact, any time I go to the garden now, it is with a whole new outlook. No longer do I feel blissfully safe from reptiles, but, instead, I am fully aware that I may very well be surprised by one of those slithering creatures that give me the heebie-jeebies and I’d better prepare myself for it!

Ahhh–as so often happens– this incident brought an analogy readily to mind. I couldn’t help but compare this to our spiritual lives. You will often hear people say that they only want to focus on God’s love and the good things in life. Let’s just ignore Satan, demons, and anything negative. Pretend like it’s not there.

The problem with this is that just because we ignore him doesn’t mean he isn’t there. Just because we pretend he doesn’t exist, doesn’t mean he isn’t prowling about, working behind the scenes. When we are fully aware of his presence and that he is seeking to devour and destroy, we will approach our lives and ministries differently. If we live in blissful ignorance and pretend he’s not there, we become very vulnerable to his bite.

And –quite unlike a harmless garter snake bite– Satan’s bite is of the worst kind, filled with deadly poison. We can’t afford to live in ignorance but, instead, need to recognize that we are in a world where we have an enemy. Things are not all good and happy and “hunky-dory”, nor will they ever be until we reach our home in glory (Revelation 21:1-4).

The snake in my garden was a great reminder that danger lurks everywhere and just because we don’t see it, doesn’t mean it isn’t there. I’d better make sure I have my armor on so that I can withstand the arrows pointed at me (Ephesians 6:11).