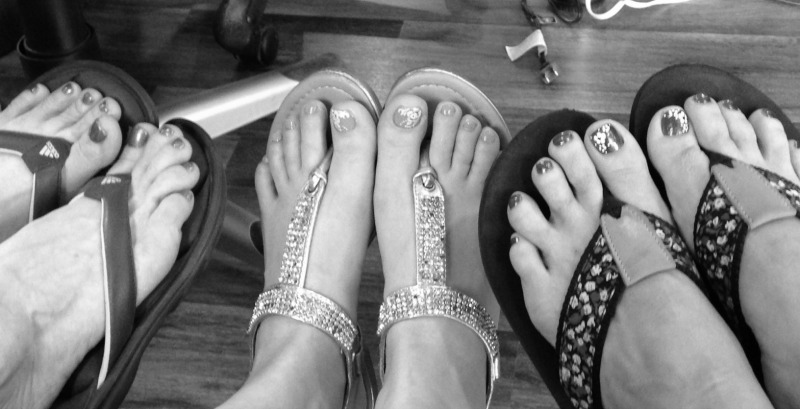 I first noticed the lady sitting over in the waiting area. I didn’t think too much about her, except to feel bad that my Ukrainian friend, my mother, and I were keeping all the nail salon workers busy as they gave us pedicures. She would have to wait awhile.

But before the owner of the salon started my friend’s pedicure, she ran the water for the lady’s pedicure in the chair that sat directly across from mine and directed her to come back, relax in the massage chair, and put her feet in the warm water while she waited.

I watched as she settled in with a magazine. She had short, steel-colored hair, dark tanned skin, and didn’t seem to smile much. I turned my attention back to my friend and mom and didn’t give her much thought after that.

As we sat there, relaxing, our conversation covered many topics. We were thoroughly enjoying one another’s company, especially since we hadn’t all been together for three years.

After awhile, the salon owner started asking us questions about our lives and we reciprocated interest in her life, as well. She shared that she had moved to the United States from Viet Nam when she was 36. That was twelve years ago and she had spent her first couple of years in a different state. She then went on to share how the people in our current town were so much friendlier and seemingly a lot less worried about classes and status than where she had come from.

At that point, I made some kind of light-hearted statement about life being way too short to be worried about how much money someone makes or what family they come from.

That must have lit a fire under the chair of the lady across from me.  Her face became animated as, unasked, she joined our conversation, agreeing with what I had said. She then went on to vehemently state how much she hates the area we live in. In fact, she had moved away many years ago and sounded like that was the best decision she had ever made. She listed about a dozen reasons of why she hated her hometown. Actually, they were pretty much all the same reason, stated in a variety of ways. This went on for an inordinate amount of time and was rather annoying as she continued to bash our town with gusto.

She went on to tell us that her father used to be some high-up executive in the local factory and how people use you when you are in a position like that.

Aha. Now we were getting somewhere. I made an educated guess that someone had used her to get something from her father and, judging by her reaction, it had caused a deep and painful gash in her heart.

As we sat with our toes under the UV light a little later, leaving Miss Negative in her chair at the back of the salon, we put our heads together and whispered about how odd that experience was. My dear Ukrainian friend summed it up best: “She had so much Bad Passion!”

Oh, what a great way to put it.  This bitter woman was filled with “bad passion”. I wondered what had caused all of that hurt and bitterness directed towards an inanimate town and all of its inhabitants. Now I have met a few snobs (and worse) in my years here, but I’ve met an awful lot of really nice people, too. Unfortunately, this woman has closed her eyes to anything good from her hometown.

As I thought about this woman later on, I just felt pity for her.

All of us get hurt. All of us get used. This is especially true if you have something other people do not. If you have more money, more beauty, more talent, more connections, more anything, you can be pretty sure someone will use you. If you don’t know how to say no, someone will probably use you. And almost all of us get betrayed at one time or another. This is life. At least here on earth.

But we shouldn’t let these incidents color our whole world black. There are still lots of good people and good things for which to be thankful.

While this lady ranted on and on, I smiled and nodded, not saying much. Truthfully, I was at a loss as to what to say. After we left the salon, we talked about what we should have said.

But my mom summed it up pretty well, “she was the kind that wouldn’t have listened, anyway.” And my mom did have a point. This bitter woman’s negative viewpoint did seem firmly embedded in her heart and mind.

Oh, the sweeping accusations and generalizations we make when we get hurt. We not only hurt ourselves, but we end up hurting others, too.

Why do we do this? Why do we allow one or two or ten people to change how we feel about a whole town? Or a whole race? Or a whole state? We really need to open our eyes to just how foolish this is.

And I go back to my original statement: Life is just too short for stuff like this.