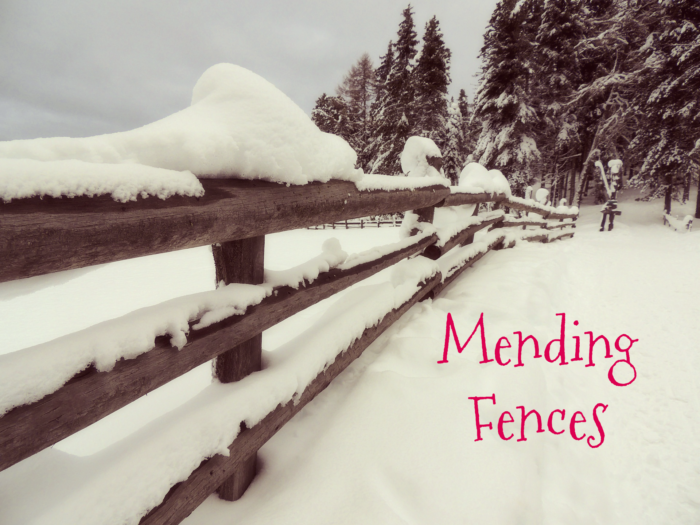 During the holiday season, I like to step away from my normal type of post once each week and share one part of a 5-part Christmas Story that I have written. It stretches my brain to write in this different way and hopefully provides you with not only a little escape from the busyness of the season but also challenges you in your own walk with the Lord as you reflect on the story. And, so, with that brief introduction, I present to you this year’s story, which is called Mending Fences—

I don’t know when it happened but I couldn’t remember what she looked like. Not that it mattered. She probably had changed, anyway. And it wasn’t like I was going to see her anytime soon. But it still filled me with sorrow that I couldn’t remember her face.
I sat on my front porch, deep in reflection. The smell of autumn was in the air and a cool wind had forced me to don a light sweater. This time of year always made me nostalgic. It brought memories of school days, football games, and the much-anticipated preparation for the holiday season at Dad’s store.
My thoughts turned back to my sister. I squinted my eyes as I tried to recollect her features. I remembered that she had straight brown hair. And greenish eyes hidden by rather thick glasses. But the rest just disappeared into the vague recesses of my memory.
How could I have forgotten what my sister looks like? The thought startled and scared me at the same time. A part of my past was escaping my memory and it deeply saddened me.
I went back into the house and climbed the stairs to the attic. I turned on the light and started making my way through the collection of boxes kept there. There was a photo album from my past somewhere in all of those relics. I finally spotted the gray container that held all my old albums. I found the frayed, green photo album I was looking for as soon as I opened the container.
I sat down on a box and started paging through it. Ahh, there she was. My beautiful, green-eyed sister with the tortoise shell glasses and thick brown hair that fell just a little below her shoulders. The perfect nose and high cheek bones gave her a special type of beauty that I had not inherited.
I wondered if she still wore her hair like this? Did she still wear glasses or did she have contacts now? It had been fifteen years since we had laid eyes on each other. Could it have really been that long?
It was with great regret that I remembered that we hadn’t even talked to each other that last time. The awkwardness of Daddy’s funeral came back in a rush. The great efforts we both made to try and avoid one another. The rapid heartbeat and eyes on the ground if she got too near. The lack of desire to even speak to her. Her lack of interest in Greta, her only niece. I could remember it all like it was yesterday.
But one does a lot of growing up in fifteen years. And now I found myself wishing I had done a lot of things differently. If onlys plagued me.
If I had to do over, I would change things. I really would. But I recognized the futility of that thought.
“Mom?” Greta stirred me out of my reverie.
“Up here, honey! I’ll be right down!”
Sighing, I placed the photo album back into the box and placed the lid on top. A few hours later, our Friday pizza and movie night was over and Greta was sleeping soundly in her room. As I sat on the sofa in the family room, my mind went back to the past.
Life has a way of stealing our happy endings. And so it was with me. But maybe I had short-changed myself. I was simply reaping what I had sown. Perhaps I should start at the beginning. That would help all of this make more sense to you.

Once upon a time (don’t all stories begin this way?) there were two sisters. Evie, the firstborn, was shy and quiet. Her younger sister, Eliza, was boisterous and outgoing. But the two were inseparable from the very beginning.

Except that the lovely story ended up not so lovely. I’m Eliza. The younger sister by only 15 months. And Evie and I were best friends. Together we navigated playgrounds, middle school, and teen-aged angst. Together we weathered broken friendships, boyfriend break-ups, and frustrations with Mom and Dad.
Memories started flooding my mind as I recalled those days. Like the time when Marcy, my best school friend of several years, just decided one day that she liked Lauren better than she liked me. From that time on, I watched the two girls eat lunch side-by-side, climb the monkey bars at recess, and sit beside each other at every opportunity—all while I sat alone and uninvited to their circle. Oh, how I had cried. It was Evie who comforted me. Evie who wrapped her small arms around me so tightly and said, “now, don’t you worry! We love you and family is what matters.”
I felt my eyes start to burn. Oh, the turns that life takes. I wondered what would have happened if Rick had never set foot in dad’s store? How would our lives have been different?