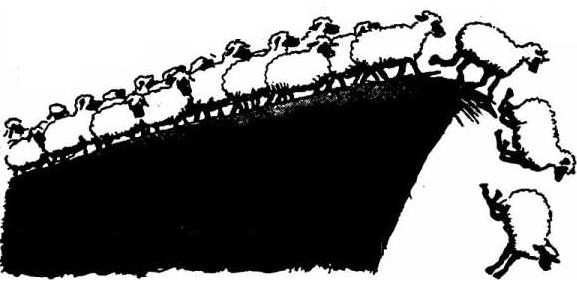 As believers, we have seen great effort in these recent years to unite all religions that use the name of Jesus. We are told that if we do not agree with this, we are divisive and that we are committing perhaps the worst sin of all. Of course, it doesn’t seem to matter if the religion is based off the Bible alone or not, as long as they use the name of Jesus. This has been a struggle these past twenty years or so as we listen to popular pastors encourage us to partner with faiths that aren’t truly Christian.

In fact, the other day I even heard Rick Warren recommend we partner with Muslims, since we serve the same God. His mouth spoke those words. On the radio. Really?! And, yet, many people still look to this man as a godly leader. Let me state first that we, unequivocally, do not serve the same God as the Islam faith. Just because they serve one God and so do we, does not mean it is the same one.

So why this push for unity? Personally, I believe it is a puzzle piece that fits right into the end times scenario. The future power of the Antichrist will come much more easily with a global, one-world religion and we are seeing this take place right before our very eyes quite literally. Fifty or a hundred years ago, believers couldn’t have ever imagined joining with all different religions while ignoring major differences. And, yet, here we are today, being encouraged to join with other religions that don’t even use the Bible as the foundation of their faith. I wrote a post a little while ago about how easy it is for us to discern if a religion is true or false, so If you are wondering about that, you can find that post here.

Do not be unequally yoked together with unbelievers. For what fellowship has righteousness with lawlessness? And what communion has light with darkness?

This seems to make it pretty clear. But, if that isn’t enough convincing for you, I am including this by A.W. Tozer. How discerning he was way back when and how appropriate this is for us today–

{italics are mine for emphasis. His insight is truly amazing!}

When to unite and when to divide, that is the question, and a right answer requires the wisdom of a Solomon.

Some settle the problem by rule of thumb: All union is good and all division bad. It’s that easy. But obviously this effortless way of dealing with the matter ignores the lessons of history and overlooks some of the deep spiritual laws by which men live.

If good men were all for union and bad men for division, or vice versa, that would simplify things for us. Or if it could be shown that God always unites and the devil always divides it would be easy to find our way around in this confused and confusing world. But that is not how things are.

To divide what should be divided and unite what should be united is the part of wisdom. Union of dissimilar elements is never good even where it is possible, nor is the arbitrary division of elements that are alike; and this is as certainly true of things moral and religious as of things political or scientific.

The first divider was God who at the creation divided the light from the darkness. This division set the direction for all God’s dealings in nature and in grace. Light and darkness are incompatible; to try to have both in the same place at once is to try the impossible and end by having neither the one nor the other, but dimness rather, and obscurity.

In the world of men there are at present scarcely any sharp outlines. The race is fallen. Sin has brought confusion. The wheat grows with the tares, the sheep and the goats coexist, the farms of the just and the unjust lie side by side in the landscape, the mission is next door to the saloon.

But things will not always be so. The hour is coming when the sheep will be divided from the goats and the tares separated from the wheat. God will again divide the light from the darkness and all things will run to their kind. Tares will go into the fire with tares and wheat into the garner with wheat. The dimness will lift like a fog and all outlines will appear. Hell will be seen to be hell all the way through, and heaven revealed as the one home of all who bear the nature of the one God.

For that time we with patience wait. In the meanwhile for each of us, and for the church wherever she appears in human society, the constantly recurring question must be: What shall we unite with and from what shall we separate? The question of coexistence does not enter here, but the question of union and fellowship does. The wheat grows in the same field with the tares, but shall the two cross-pollinate? The sheep graze near the goats, but shall they seek to interbreed? The unjust and the just enjoy the same rain and sunshine, but shall they forget their deep moral differences and intermarry?

To these questions the popular answer is yes. Union for union’s sake, and men shall brothers be for a’ that. Unity is so devoutly to be desired that no price is too high to pay for it and nothing is important enough to keep us apart. Truth is slain to provide a feast to celebrate the marriage of heaven and hell, and all to support a concept of unity which has no basis in the Word of God.

The Spirit-illuminated church will have none of this. In a fallen world like ours unity is no treasure to be purchased at the price of compromise. Loyalty to God, faithfulness to truth and the preservation of a good conscience are jewels more precious than gold of Ophir or diamonds from the mine. For these jewels men have suffered the loss of property, imprisonment and even death; for them, even in recent times, behind the various curtains, followers of Christ have paid the last full measure of devotion and quietly died, unknown to and unsung by the great world, but known to God and dear to His Father heart. In the day that shall declare the secrets of all souls these shall come forth to receive the deeds done in the body. Surely such as these are wiser philosophers than the religious camp followers of meaningless unity who have not the courage to stand against current vogues and who bleat for brotherhood only because it happens to be for the time popular.

“Divide and conquer” is the cynical slogan of Machiavellian political leaders, but Satan knows also how to unite and conquer. To bring a nation to its knees the aspiring dictator must unite it. By repeated appeals to national pride or to the need to avenge some past or present wrong the demagogue succeeds in uniting the populace behind him. It is easy after that to take control of the military and to beat the legislature into submission. Then follows almost perfect unity indeed, but it is the unity of the stockyards and the concentration camp. We have seen this happen several times in this century, and the world will see it at least once more when the nations of the earth are united under Antichrist.

When confused sheep start over a cliff the individual sheep can save himself only by separating from the flock. Perfect unity at such a time can only mean total destruction for all. The wise sheep to save his own hide disaffiliates.

Power lies in the union of things similar and the division of things dissimilar. Maybe what we need in religious circles today is not more union but some wise and courageous division. Everyone desires peace but it could be that revival will follow the sword.

2 thoughts on “Divisions Are Not Always Bad”