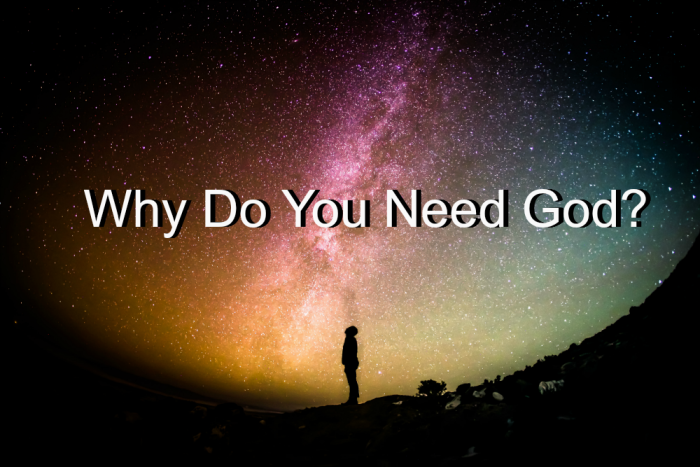 Why do you need God?

The answers to this question were all given with different voices, different words, different intonations. But they all said basically the same thing–

To make my life easier.

Words like encouragement and strength and comfort were used. We need God because He helps us get through difficult times.

This was a dialogue I heard a couple of weeks ago on Todd Friel’s Wretched Radio program. Almost every Wednesday he dedicates his radio program to talking to the lost. He calls it  “Witness Wednesday”, taking his radio show on the road and asking people what they think about God. It is generally fascinating and eye-opening. On this particular day he was asking the question “Why do you need God?” to students on a college campus.

Of course, many said they don’t need God or that they don’t believe in God. But far more troublesome to me were the students who seemed to have a basic understanding of Christianity as a religion and yet didn’t truly understand why they need God.

Instead their answers were filled with the feel-good, me-centered drivel we have all grown quite used to.

But is this really why we need God? Is it because He helps us get through tough times and makes life here on earth so much better? While I am not denying that this is true, I would like to suggest that this is not why we need God. The primary reason we need God is because we are eternally damned without Him. (Romans 6:23; Romans 3:23; Revelation 21:8)

We are born sinners. We are slaves to our sin and to Satan, living in thick, black darkness. But God sent His son to redeem us–to die on a cross for our sins, making a way for us to be reconciled to Himself. We need not be condemned forever, because Jesus died for us–in our place! What marvelous truth! (Hebrews 9:12; I Timothy 2:5) This is what Christianity is all about.

At least it used to be what it was all about.

Somehow in the last 20 years or so, it has become a watered-down, weak, ecumenical, self-absorbed religion that looks nothing like what the Bible teaches.

The intrinsic problem with this change is that there are so many who have been swept into this religion that consists of a god of their own making. When we move away from the Word of God as we strive to answer eternal questions, we leave ourselves open to lies and deadly false teaching.

As I heard the students explain why they need God, there was no mention of sin and no mention of salvation. Instead it was centered around how God helps them in their self-centered agendas. No wonder they get disillusioned later on in life when things don’t go as they planned.

This is an amazing contrast to the disciples, all who were martyred for their faith (except John, who was exiled to an island). But the censorship and persecution started for the disciples even before Jesus was crucified. As I read about Jesus raising Lazarus from the dead in John 11 last week, I learned that Jesus was walking into grave danger as He traveled to Lazarus, who was located in Judea. By this time, the Pharisees were actively seeking to do away with this Man who was calling Himself God. Of course, Jesus knew that nothing would happen to Him before it was His appointed time, but the disciples did not have this same knowledge. And so as Jesus starts for Judea, the disciples fully understood that their lives could be in danger, as well, if they decided to accompany Him. But instead of turning back, this is what we see Thomas say in verse 16–

Then Thomas, who is called the Twin, said to his fellow disciples, “Let us also go, that we may die with Him.”

The text would indicate that he honestly believed that there was a likelihood they would die with Christ on that day.

This not only shows us just how dreadful and powerful the Pharisees were but it also tells us just how dedicated the disciples were to the Savior. And I find myself wondering:  Would I have been courageous enough to follow Jesus? Or would I have opted to protect myself instead? It is sobering to think about, isn’t it?

When Jesus tells us to pick up our cross and follow Him (Luke 9:23), this does not mean that our lives will be full of flowers and sunshine. Sure we will be blessed with wonderful moments (thankfully!) but some of the places Christ leads us will be terribly difficult and we will find ourselves persecuted and hated. Are we willing to make that sacrifice to follow the Savior? Or will we walk away broken and embittered when Jesus doesn’t meet our “felt needs” or fulfill our worldly dreams?

Are we prepared to follow Jesus anywhere or will we defect when things take a painful turn? Asking this question is a great way to test the genuineness of our faith. If our faith is built on the biblical doctrine of salvation then we will stand strong in the face of persecution. We understand that we need God because He is our only hope of salvation from the sin that imprisons us! And then–as we grow in Christ–we learn that He offers us so much more than we can ask or imagine, but being rescued from our sin is always our starting point.

Will we be like Thomas–understanding true salvation and following Jesus even though it may mean suffering for the sake of our Savior? Or will we be like those college students–living with a vague, partial, and unbiblical definition of a God they aren’t even seeking?