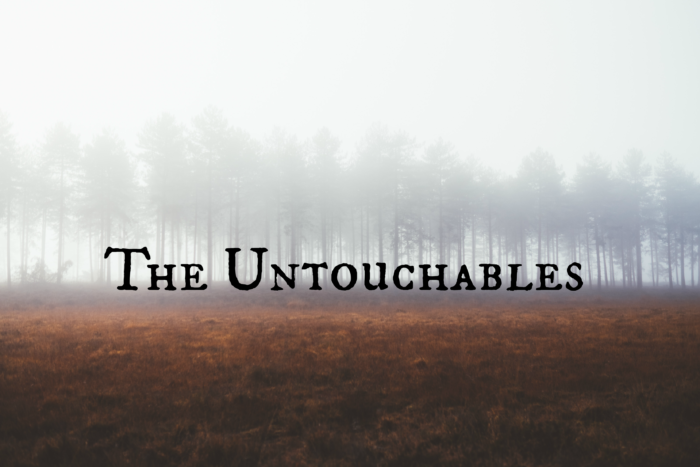 A few months ago I posted something negative about a man that was much beloved by the Christian world. What I posted was based on his documented actions of unity with a false religion and his recorded words on video where he said he does not believe Jesus is the only way. But because this man was so beloved, I was greatly attacked on both social media and personally. In fact, I lost both readers and perhaps even a few friends over this.

This has happened to me before with a few other men and women that I have spoken up about and I have come to realize that there are certain people one must never talk about if one does not want to be maligned, gossiped about, and openly attacked. I have deemed these the “untouchables”.

They have become such a part of the fabric of Christianity that even solid believers are unwilling to take a hard look at their actions and words–even if they conflict with scripture.

So who are these “untouchables”? There are a few similarities I have noticed among them–

1. They generally begin their ministries in a biblically solid way. While they may not hold to orthodox beliefs, their initial books and teachings will hold few things that conflict with the traditional interpretation of scripture.

2. They generally have friends in high places. Not only are they trusted by the masses, but they are trusted (and lauded and praised) by men and women that we trust.

3. They generally do and encourage a lot of good things. They promote the things that almost all people have a heart for: Helping others; Loving Jesus; Loving others; Unity.

4. They generally do not accept the biblical account of creation or at least leave the door open for evolution.

5. There is always a gradual and subtle creep away from what scripture teaches. This is slow and sure. It will always happen.

So what does it matter? If they’ve done a lot of good, why not leave them alone?

I would ask this: Can it possibly be God’s definition of “good” if the teacher is leading his followers off of the narrow way and on to the broad way?

Can someone’s good outweigh the bad when it comes to the health and destiny of people’s souls?

We are a culture that is obsessed with following people. Movie stars. Athletes. Musicians. And, yes, even pastors and Bible teachers. This blind obsession often leads to an unbiblical loyalty and trust that reassures us that we can stop discerning.

One of the most troubling problems within the church today is the unwavering loyalty to a “Christian” personality rather than to Christ and His Word. The unwillingness to test every man’s teaching with God’s Word, coupled with a stubborn lack of discernment, produces fertile ground for deception to flourish.

And that is exactly what we have these days–a fertile ground for deception to flourish because of unwavering loyalty combined with a stubborn lack of discernment.

Look, I am not so naive to think that I can change the world with a blog post. This is the Christian world we live in and my blog post isn’t going to change anything. But here’s what I hope to do this morning–

I hope to encourage you (and myself, too) to not let any man or woman become an “untouchable” in our lives. Everyone we read or listen to should be held to the authority of scripture. And when someone says something negative about someone we dearly admire and trust, then we should be willing to take an honest look at what they are saying and compare it to scripture (rather than attacking the messenger, as is so often the case). We must be careful to let no man or woman receive a pass on teaching what is right and true simply because we like them or because discernment happens to be dreadfully unpopular.

I know it’s a discouraging, time-consuming, and exhausting task to hold teachers and preachers and authors up to the light of God’s Word. We are living in an age where deception is flourishing and discernment is viewed as sinful. It’s not fun to be in this camp. But it is not only necessary if we want to stay on the straight and narrow, it is what we are commanded to do as believers.

I leave you with this verse (I Thessalonians 5:21)–

Test all things; hold fast what is good.

10 thoughts on “The Untouchables”