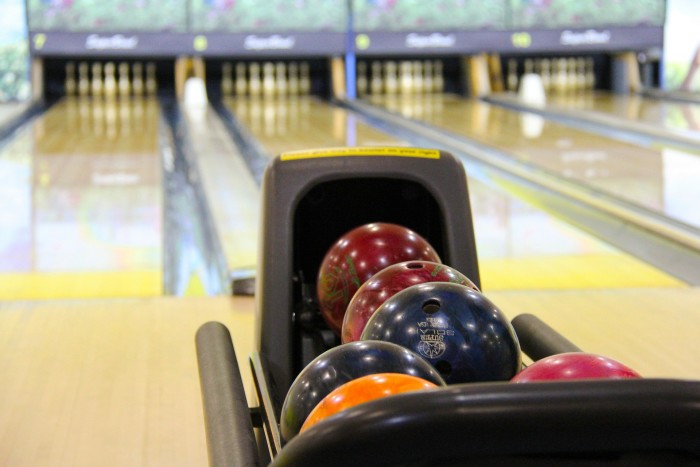 Last night I went bowling for the first time in perhaps ten years or more. It didn’t take me long to remember why I never go bowling. I. Am. Terrible. Embarrassingly so. I am not that great of much of anything, but I am also not that bad at anything. Except Bowling.

Even after two games, I just could not keep my arm straight.

I have recollection of my father telling me the same thing somewhere back in my hazy memory. But no matter how hard I tried to “keep my arm straight”, the ball would inevitably end up in the one of the gutter lanes. Sometimes it rolled to the right and other times to the left, but I just couldn’t get that stupid ball to go straight. Whether I rolled it gently or rolled it with all my might, it still ended up rolling to either side.

It’s been like this since I can remember. I am sure if I bowled more often, I might get better (emphasis on the might), but after times like last night, I really have no interest in repeating the activity anytime soon.

Since we played two whole games, I started thinking about a few lessons you can learn when you are really terrible at something.

1. The good things in life are much sweeter when they are rare. For example, I was consistently having frames where I would be lucky to hit three pins. And then around frame seven of the second game, I got a strike. How that even happened, I have no idea, but what a nice surprise! By that time in the evening, it was totally unexpected and extra-special. Life is a little like that. If we can have ice cream everyday it’s not that special. But when it is a rare, special treat, like it was for my father growing up, then it’s extra-special and so appreciated. Sometimes I think our lives today, due to so many modern conveniences, credit cards, and an abundance of just about everything, have less sweetness in them because we are so used to having whatever we want whenever we want it.

2. Pride leads to misery. In order to enjoy last night, I had to release my pride. I am not joking when I say it was incredibly embarrassing. I am not sure how someone could be as bad at that game as I was. I let it roll off my shoulders for the first game. After all, I was warming up. But when the second game continued on in the same pattern, I started to get frustrated. I had to ask myself: Why am I frustrated? It was because my pride was being hurt. It was only embarrassing because I was worried about what people were thinking about me. And then I looked around at the beloved people I was bowling with and realized that not one of them cared how I bowled. Their love for me has absolutely nothing to do with how I bowl. I cast my pride aside and tried to just have fun. I recognize that I am talking about just a game, but I really do wonder how many of us let our pride keep us in abject misery? We grow frustrated and angry and self-absorbed, worrying about what other people are thinking of us and letting this thought process steal our joy.

3. Pride can keep us from rejoicing with others. Our natural inclination, if we are not very careful, is to grow resentful at the good news of others if we are not experiencing the same joy. It would have been much easier to rejoice with my fellow-bowlers over their successes last night if I had been doing well. But because I was doing so poorly, it was a bit more of a challenge. It was much easier, however, once I accomplished number two on this list and cast my pride aside.

4. Our own trials can keep us from being compassionate. When we are so caught up in our own story and our own misery, our eyes focus inward and ignore all that’s going on around us. For instance, last night my natural, human tendency would have been to dwell on myself and how badly I was doing. But I wasn’t the only one doing terribly. Okay–so I was the only one doing that terribly–but I wasn’t the only one not having a great game. But if I focused only on myself and how badly I was doing, then I wouldn’t reach out with compassion and love to others who were suffering, as well. I know that this was only an insignificant bowling game, but I think this is a lesson that can be easily applied to life, as well. When we are in the midst of a trial or our own suffering, we can tend to forget that there are others suffering, as well. Life doesn’t stop for everyone else when we are enduring our own personal trials. And while trials take extra energy and can exhaust us, we don’t want to let them keep us from seeing the hurt and brokenness in the lives of others. Instead of allowing trials to focus our eyes inward on ourselves, we should let them fill us with empathy and turn our eyes outward. No easy task, mind you.

5. Most people aren’t even watching me. After the first few frames, when it was all new and we had just arrived, everyone was watching everyone else, but after a few rounds, we had started talking as the other people bowled and no one was really watching anyone. There were a few frames where I had the bowling ball take its familiar path towards the gutter and catch one lonely pin before disappearing. I’d turn around to see if anyone else saw it but they were busy talking. And it reminded me of something–most people aren’t watching us. Sometimes we can feel like we are in a fish bowl with every eye on us. We forget that most people are so caught up with their own lives that they are not paying attention to our hair or our clothing or the other shallow stuff we get so worked up about. Most people do not even notice that blemish on our face or the spot on our shirt. And yet, we can get so worked up about these things if we aren’t careful.

So there you have it. Five life lessons from a terrible bowler.