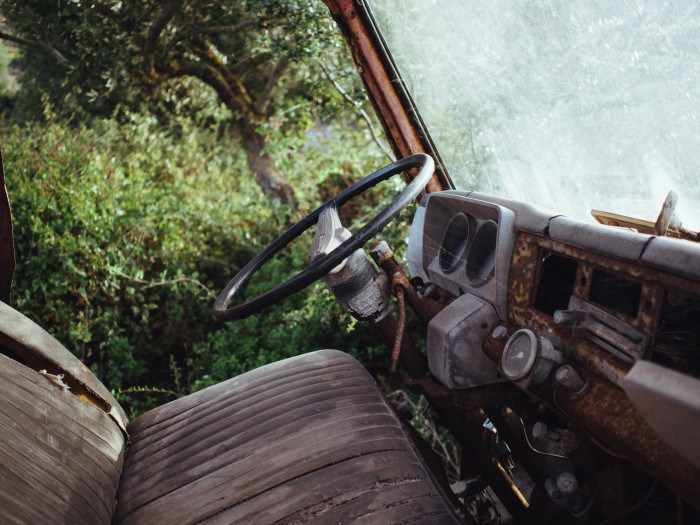 The one thing about living next door to your business is that people seem to think they can just stop any old time. We have quite the stories of strangers who knock on our house door, simply because there is a business next to it and that somehow makes it okay. This happened the other day. But it was an unusually frightening occurrence.

It was an ordinary Saturday. We were taking a quick break for lunch before continuing our work outside. We were talking when we suddenly heard a voice from our mud room. We assumed it was someone we knew, as most strangers do not just enter a house without knocking. I walked to the door expecting a familiar face.

However, what I saw was a toothless, unkempt old man who reeked of cigarette smoke. In his hand he held a newspaper. He pointed to an address on it and asked for directions. Something about him made me uneasy.

At that point, I had one thought: I need to get this guy out of my house.

So I tried to quickly tell him the simplest directions to the city which was on the newspaper. He told me to follow him outside to his friend, where I found an even creepier guy waiting in an old station wagon.

This new guy got a little frustrated with me as I tried to give him directions. He said I was taking him to the wrong side of the city. I told him I couldn’t help him then and walked quickly away. Honestly, I really wondered if they would try to abduct me. They were that creepy. I couldn’t wait to get back inside my house.

Thankfully, they backed out of the driveway and I have not heard from them since.

I find it interesting that there was something inside me that told me that these guys were bad news. Inside each of us is this little piece of our brain that flashes “danger!” when we should feel fear. This is helpful in a myriad of ways, as long as it isn’t working overtime.

Sometimes, I wish our brain would have that same response to spiritual things that are dangerous. For instance, wouldn’t it be nice if we heard the word “danger!” when we picked up a book or chose to watch something or listened to a podcast?

Unfortunately, most of the spiritually dangerous things are so subtle that we view them with no fear at all. It reminds me a little of a murderer who is the normal guy. The one that isn’t creepy and doesn’t raise the hair on our necks when we are with him. He is no less dangerous just because he looks normal. In fact, this may make him more dangerous because we aren’t wary in his presence.

I wonder if things that are labeled “Christian” aren’t sometimes more dangerous because we don’t have the normal discernment and hesitation that we would have if it was something secular?

The good thing is that we can train our brains to look for clues. We can do this when we are with people who may be dangerous and we can do this when we are presented with something labeled, “Christian.” Just because it is in a Christian bookstore does not make it biblical. In fact, I would venture to say over half of things labeled Christian these days are unbiblical.

I don’t think we used to have to be quite so skeptical. When something was labeled Christian it probably was. But those days are so long gone. And we have to remember this as we hear of the latest, greatest “Christian” series, movies, books, and speakers. We can’t just assume that they are based on God’s Word, anymore.

Let’s work at increasing our sense of healthy wariness for the spiritual things that come our way. It is so important that we be discerning and get unbiblical philosophies out of our lives– as quickly as I removed those creepy strangers from my driveway!

2 thoughts on “The Creepy Strangers”