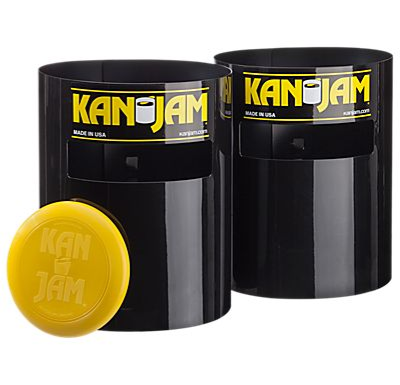 My family’s latest craze is Kan Jam. If you’ve never heard of it, it is a game where you try to throw a Frisbee into a can. So simple, right? So when we decided to have a tournament on our camping trip over the weekend, I said I’d like to join in. After all, I used to play ultimate Frisbee in college. Isn’t throwing a Frisbee a little like riding a bike? How hard could it be?

I found out quickly that I had definitely not remembered how to throw a Frisbee. My poor game partner (my husband) not only had to endure a lack of points, but also had to chase the Frisbee as it would soar off to the right or left. One time I even let go too late and hit someone watching the game! This was not going as I had anticipated. Now let me remind you here that I am no athlete. I’d like to be an athlete, I wish I was more of an athlete, but some things are just facts and that is one  fact I have had to face. But, come on– this was just a Frisbee!

At any rate, we lost that first game (obviously) and I sat down by the campfire to await the next game, which would surely be our second loss and finalize our elimination in the tournament. As I sat there, my dad offered some advice.

“You need to flick your wrist.”

“I was watching you and you need to flick your wrist. You are trying to use your arm.”

So next game, I changed it up a bit. And, wow. I did so much better. In fact, so much better that we won! And then we played another game and we…lost. But it was close! This flicking of the wrist thing really did work. And while we didn’t win the tournament, we at least did look respectable. And what more could an middle-aged couple playing with a bunch of “young-uns”ask for than that?

This incident came to my mind when I was doing my Bible-reading yesterday. I am a few days behind and so I read about King Joash in 2 Kings 12 and 2 Chronicles 24. He did what was right in the sight of the Lord but did not remove the high places. And so this King, while not a horrible King, wasn’t anything great and eventually met with defeat and disappointment. He allowed Zechariah, the son of the priest who had been so good to him, to be stoned to death in the temple courtyard because he didn’t have a pleasing message. Assassination by a couple of his servants was Joash’s dismal end.

So we find that Joash sort of wanted to please the Lord and do what was right, but he only made a half-hearted effort. He wasn’t willing to remove the high places or to stand up for a man who gave a tough message from the Lord. He was weak.

I know what you are thinking. What in the world does this have to do with a Frisbee. So I’ll tell you–

I can play the game and never win. Joash was a King who did what was right, but only sort of, and paid dearly for his half-hearted efforts. We can be a Christian and not live a blessed life.

When we offer half-hearted efforts to a game or don’t know how to play properly, we are never going to win. We can play a game but never win at it. When my dad offered his helpful advice, I followed it. And it benefited me greatly. Instead of another miserable loss, we actually won.

When Joash became King, he did do what was right. But he never wholly did what was right. And his end was miserable. He paid dearly for his pride and unwillingness to give 100% to God.

As believers, we can be in the game, but until we are willing to submit to God in all things in our lives and humbly follow the commands laid down in His word, we will not be blessed.

I see a lot of half-hearted believers around me. They want to experience blessing in their lives, but they want to define what that means. They like their worldly entertainment and fashion. They enjoy their trips to the bar and their partying. They hold on to anger, pride, or gluttony like it’s their job. They make sports more important than church. Or they gossip, slander, and lie. And, most importantly, they almost always have in common their lack of desire for the Word of God.  And, while I don’t believe this will keep us out of heaven, necessarily, I do believe it keeps us from experiencing a life of blessing.

The blessed Christian life can only be lived when we submit our wills and desires to God.  This is a choice we need to purposefully make every day. It is like paddling a canoe upstream. If we stop paddling, we start heading downstream immediately. And so it is with our Christian life. If we are not purposefully obeying, we are probably disobeying. It is so easy to start moving the wrong direction.

But if we do things the Lord’s way, we will start winning at life. Now– don’t get me wrong– there are no promises of physical wealth or health or anything like that. The blessings I am referring to are children and grandchildren who follow hard after God, people who are influenced by the gospel because of us, seeds planted in the hearts and lives of our family members, co-workers, and friends because of the conversations we have with them. Peace that passeth understanding and joy in the midst of trials. And inexplicable love in our hearts for the lost and for our enemies. These are the indestructible fruits that no man can take away. The only things that will matter in eternity. This is true blessing.

We can play the game but never win. But doesn’t that seem pointless? If I am going to be a Christian, I want to be the best Christian I can be. I want to please the Lord with all of my life–not reserve a bit of it to please my fleshly desires. I find this so easy to write, but so very hard to actually do. I guess it will be a lifelong journey of paddling upstream. But the blessing makes the work so worth it.

Changing direction can be done at any time. If you are a Christian, start living a life of obedience today for great rewards tomorrow. You will never be sorry.