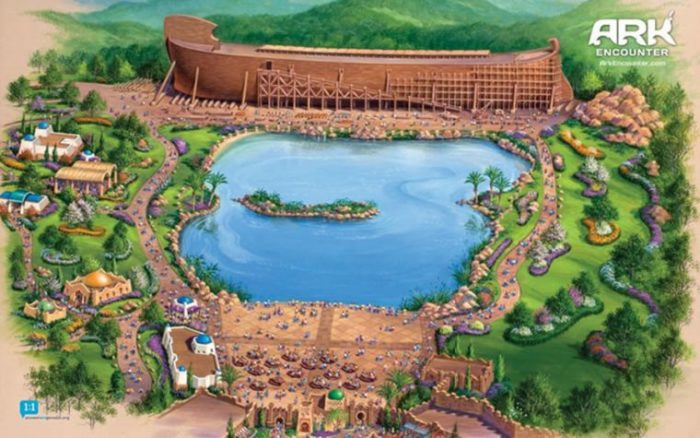 As many of us already know, the Ark Encounter— a life-sized Noah’s Ark–recently opened in Williamstown, Kentucky. There has been much news swirling around this opening. As one would expect, there has been positive feedback by Christians and very negative feedback by the rest of the world.

But I have to admit that the article by Paul Bois over at Truth Revolt had me scratching my head. At first, it looks like it will finally be someone standing up for the right of Christians to have some freedom, too. Which I guess he sort of did in the article. Sort of.

Shall I summarize the article for you?

Okay, so you may want to read it to make sure I had the right take-away, but this is the message I received loud and clear. He basically called Ken Ham a liar and then made sure the whole world knew that even though he wasn’t on the side of CBS, he really did agree with them. So he really did exactly the same thing as CBS. Which he was criticizing them for doing. Funny how that works.

So why am I even bringing this up?

He made a specific statement in that article that I beg to differ with and thought I would unpack a bit here. I am doing this because I am guessing many of you have also heard the derogatory and demeaning statements made about not only this attraction, but also about anyone who would actually believe that Noah’s ark was a historical event.

Really? So one has to wonder then: was this author there–at the very beginning– when the earth was formed? He seems to have some inside knowledge the rest of us don’t have.

Sorry, I had to be sarcastic for just a moment.

Seriously, though, who gets to decide whose assumptions are correct? Follow me here–any theory of the earth’s beginnings are based on assumptions. No one on the earth today was there. There are no science or history books that date back that far (aside from the Bible, that is!) And so, with this being the case, we have to look at all the data available to us and then come up with theories. What the scientific community wants to present as facts are not facts. They are theories based on assumptions that they are presenting as facts.

Ken Ham, myself, and other believers, on the other hand, base our views on a Book. Our assumption–which changes everything–is that the Bible is true. If the Bible is true, then the rest falls into place quite nicely.

Of course, the world doesn’t want to believe in a God to whom they are accountable and so they come up with this theory of evolution. It would almost be funny, if it wasn’t just so tragic.

And we have to wonder–which one actually believes in fairy tales? The one who is using a historical book that has been proven to be accurate over and over again or the one who believes that something came from nothing? That life came from a rock? That a living, breathing person with intricately designed body systems evolved from a single cell? A belief which would require millions of transitional fossils on this earth and yet there is NOT ONE–not one, mind you–fossil of any “in between” creatures anywhere. Along with this is the fact that there is no scientific evidence whatsoever, current or historical, of anything ever coming from nothing or of order ever coming from chaos. This is because it could never happen. And yet, we have a theory that has been presented as fact that is based on all of these very unscientific assumptions. Who is unscientific now?

This theory is taught in our schools, displayed in our museums, and assumed anywhere you go. Most of the world has bought into this even though it makes no sense at all.

Look, I am no scientist. And I don’t care if someone wants to call me names because of what I believe, but let’s be clear here–anyone who believes anything about the earth’s beginnings is making assumptions. No one truly knows. We can base it on a Book or we can base it on something else, but all–in the end–are theories which require faith to believe in.

I admire Ken Ham for what he is doing and I thank the Lord for a man that will stand in the face of such accusations and threats. He knows the truth of God’s Word and he is standing firm on the truth no matter what the world says. We need more men and women like him! And we should be praying for him and for others who are in the heat of such fierce battles.

At first, when I heard about the ark, I wasn’t sure that it was a good idea. But as I have followed the progress of it all, I am starting to understand how God will use this to further His Kingdom. People are curious and Ken Ham and his staff are very knowledgeable. I am sure they will have some wonderful conversations with the media and with folks who are just passing through, plantings seeds of the Gospel that will flourish throughout this country. And, as believers, this is our main calling, isn’t it?

Go ye therefore, and teach all nations, baptizing them in the name of the Father, and of the Son, and of the Holy Ghost: Teaching them to observe all things whatsoever I have commanded you: and, lo, I am with you always, even unto the end of the world. Amen. (Matthew 28:19-20)