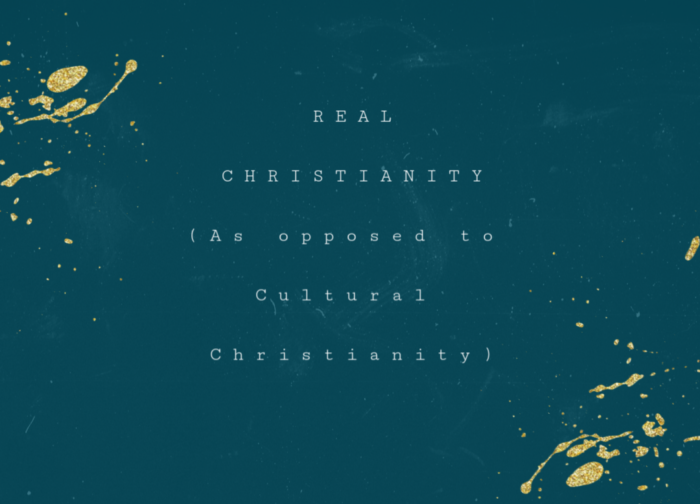 I was talking with someone recently and they were mentioning to me how most Christians seem to believe that the most important character trait any believer should have is that they are a “nice person”. While being nice is a good thing, being a Christian is so much more than just this. But, I, too, have found that “niceness” seems to trump telling the truth, forsaking the world, and even sharing the Gospel.

There is a real clash of philosophies going on currently. What makes it especially tragic is that this clash is taking place between two groups of people who would call themselves Christians.

One is right and one is wrong. We need to look in the Bible and study it to find out which is which.

It is only through the study of the Word that we can finally understand that Cultural Christianity is not Real Christianity. When someone calls himself a Christian, we must comprehend that there are two very different definitions for this word.

This became so clear to me as I prepared to speak on this topic last weekend for the women of a small Baptist Church. I thought I’d like to share some of what I learned here today.

First, Christianity is based on the Bible alone. God’s Word is the authority for our faith, and this authority is derived from the fact that God has complete authority and He tells us that the Bible is His Word. (see I Thess 2:13; Romans 13:1; Matthew 28:18)

As opposed to Cultural Christianity: Here we find a faith that is based on experiences, feelings, and emotions. We hear things like “God told me” or “God wants me to be happy”. The Bible quickly shrank in importance and influence as the focus of this false religion turned towards these things.

Second, Christianity is a rational, logical faith. It makes sense. It is based on a rational understanding of scripture. While there are some things that are mysteries to us, these things are not irrational. We are called to use our minds (and not shut them off) when we are saved. (see I Corinthians 2:16; Ephesians 4:22-23; 2 Timothy 1:7)

As opposed to Cultural Christianity: Where we find a religion that is based on mysticism. Doctrine, Theology, and Bible Study are discouraged, as the focus turns towards the subjective and the sensual. It doesn’t have to make sense. Holy living and separation from the world is scoffed at and deemed unnecessary while special messages, visions, and impressions become the litmus test of true faith. A rational understanding of sin and repentance and salvation is irrelevant in a religion that makes experience the only thing that matters.

As opposed to Cultural Christianity: Which teaches that man is basically good. The only thing he really needs Jesus for is to fix his problems. How often have you heard a CCM song or blogger talk about how beautiful and worthy you are? That is one of the easiest red flags to spot in cultural Christianity.

Fourth, Salvation comes through Jesus Christ alone. There is no other way to God (John 14:6), it is not of works (Romans 3:27-28), and it must be understood and acknowledged by the person (John 3:16).

As opposed to Cultural Christianity: Where we will find a variety of heresies regarding this. First, we will see many religions accepted as “Christian” that require works. Religions such as Catholicism, Mormonism, and Jehovah’s Witnesses are clearly false, since they require works in addition to Jesus’s finished work on the cross. We will also find the heresy of Universalism, which says that all men are saved, whether or not they know Jesus personally. The author of The Shack has publicly acknowledged that this is what he believes and yet his books are still labeled “Christian”. That’s because it is a cultural Christian book but certainly not a biblical one.

Fifth, Christianity is God-Centered. Our choices, decisions, and life direction should all be based on what will most please God. We desire to submit to His will in all things. We are willing to sacrifice our own desires in order to live a godly life. (See Romans 12:1 and Galatians 2:20)

As opposed to Cultural Christianity: Here we find a self-centered religion filled with mantras like “Follow your dreams” and “Find your purpose”. It is in this kind of Christianity, people rationalize their sin because they are their first priority. God is to bend to their wishes and desires and they call on him to do their bidding like one would call on a fairy godmother or magic genie.

As opposed to Cultural Christianity: Where we find that relevance is all that matters. Separation from the world and holy living are viewed as negative and legalistic, while the “be like the world to win the world” is the only form of evangelism. (Which is obviously not working, by the way. Because this method is not found in scripture. Anywhere.)

Seventh, Christianity is about the cross. Jesus’s sacrifice on the cross for our sin and his resurrection and victory over death is the message of Christianity. It is what happened at the cross that makes us right with God and gives us the promise of eternal life. (see Romans 5:10, I Corinthians 5:18-19)

As opposed to Cultural Christianity: Where we find a false religion that is centered on finding personal purpose, understanding my worth, or making the world a better place.

And so you can so obviously see that, when we actually sit down and open our Bibles and do a comparison, these two religions–although going by the same name–are nothing alike. In fact, they are polar opposites.

So don’t be fooled.

I encourage you to keep these differences in mind as you talk with fellow believers, evaluate materials for your home or church, bring in special speakers, choose what books to read, what pastor to listen to, or what radio station to turn on.

Be diligent, be steadfast, be cautious.

Test all things; hold fast what is good.