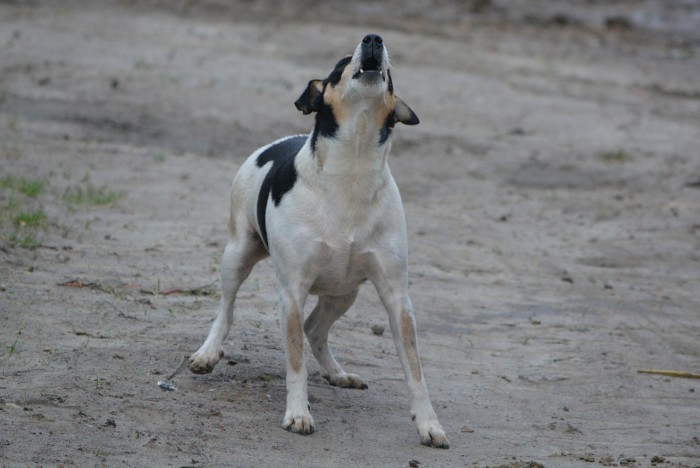 The dogs are menacing and terrifying– much more so than the barking dog in the picture above. Since I don’t get my camera out in the middle of an attack, I have no picture of the actual dogs. But let me start at the beginning.

Around five years ago, I started running and I would always hate passing this particular house. The dogs would run out on to the road and I would try to act like I didn’t care, shouting at them, and scooting past as quickly as possible. But then came knee surgery and that was the end of running for me.

Fast forward to a few weeks ago, when I decided that I would see if I could get into the habit of walking. Since my dogs love going for walks (and my Chocolate Lab could stand to lose a little weight!), I decided to take them with me. Unfortunately, I need to pass this house where these dogs reside to reach both developments I like to walk in.

The first few times, the owner saw me coming and called them inside. I started to relax when I walked by, thinking she had them under control now.

And then there was the day last week that we were on our way back home. I crested the hill and spotted the dogs. My heart started pounding in fear. I was across the road from where they were, so I scrambled up the embankment next to the road and onto the field to put as much distance between me and them as I could. And then I started walking really fast.

But before I could blink, those dogs had run right across the road, up the embankment, and stood circling my dogs and growling. And this was no friendly growl. I have not been that frightened in a long time. I started screaming at them and, finally, after what seemed like an eternity– but was probably only a few seconds–the owner came out and called them and they left us.

My heart was beating like crazy. I had not been that scared for a very long time. What would I have done if the owner had not heard me? I had no idea.

Now what? I thought about this the whole way home. Would I keep walking? Or just give up?

I decided that I was not going to let a couple of dogs scare me and so I continued to walk, always taking great care when I’d go by that house and yet assuming that the owner wouldn’t let such a thing happen again, as she could visually see (and hear) just how frightened I was by her dogs.

But I assumed quite wrong. This past Saturday, my daughter and I decided to take the dogs for a walk in the beautiful sunshine. As we approached the house, my eyes scanned the horizon for the dogs but didn’t see them. I breathed a sigh of relief. Unfortunately, the relief was naive and short-lived, for as soon as I passed the barn, I saw my two formidable enemies standing there. I knew what was coming. I told my daughter to pick up and hold our small dog and I stood there, this time with a can of Mace in my hands, and tried to defend myself and my Lab as much as possible.

We must have been quite a sight there in the middle of the road–me with my flying can of mace, screaming at the top of my lungs and my large Chocolate Lab that may as well have been Winnie-the-Pooh, for all the responding she did. She literally just stood there–which I guess is good or it could have grown very, very ugly.

Just about the time I thought those teeth were going to sink themselves into my dog, the owner came out and called them off. I asked her-as kindly as I could muster–to pleeeease put up a fence for her dogs. But even as I asked it, I knew that it would never happen. It’s just something she says to the people who feel threatened as they walk by her house.

So now I am not sure what to do. But I am leaning towards never walking by her house again. It’s just too frightening and I really don’t know what those dogs would do with their bared teeth, should their owner happen to be occupied.

And it makes my heart sink, because I had been working myself into a good habit of walking until this. It’s so discouraging.

But as I was thinking about this, I realized that most of life is like this. Whenever we want positive change, we will run into obstacles. Things we didn’t count on. The stuff you can’t plan. Whether you are working on a healthier body, a better marriage, sticking to a budget, or you have a goal to be in God’s Word, you can almost be guaranteed that something will happen along the way to derail you– if you let it.

What is the best way to respond to these obstacles? How do we keep from jumping ship? For many of us (myself included) the path of least resistance is to throw up our hands in defeat and comfort ourselves with the fact that at least we tried.

But will this take us to where we want to go? And, more importantly, is this how God would want us to respond?

Godly Christian living is really hard work. It’s full of obstacles and discouragement. But we can’t let that stop us from doing what’s right. For if we do, we will stop growing. And if we aren’t growing, we are shrinking. There is really no neutral.

And so, I have been trying to think outside the box a bit. How do I get past that house with my dogs in peace? I can’t walk the other direction, because there is a dangerous hill where cars fly. That feels even more dangerous than passing the dogs. I haven’t really solved the problem yet but I haven’t given up. At least not yet. Although, I have to admit, it’s very tempting.

But all of us face obstacles. Any positive change we try to make is hindered by obstacles and trials. And so we pray for strength and we keep walking in the right direction. Sure, our best laid plans may have gone awry, but the Lord knows all that. No obstacle or trial surprises God. Even menacing watch dogs don’t escape His notice. And somehow, there is great comfort in that.