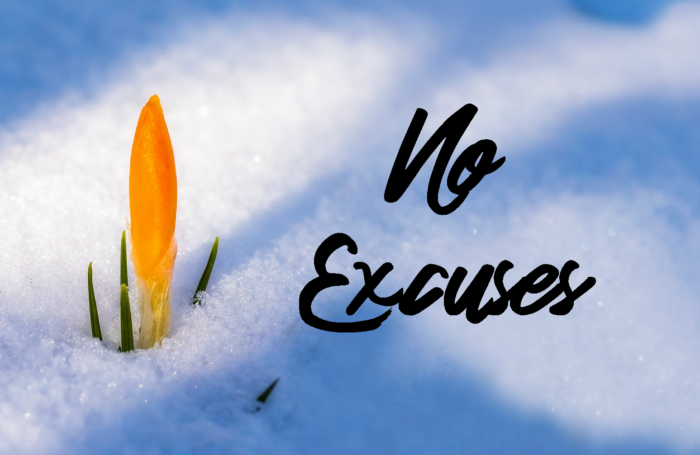 Have you ever heard a fellow Christian say something like this: “Well, I just don’t have that gift.” Maybe you’ve even said it. Many of us have. Whether the discussion is on the topic of evangelism, giving, hospitality, or discernment, we often give ourselves passes on these commands in scripture with the phrase, “I don’t have that gift.”

But does that response hold up to biblical scrutiny?

This morning I want to take a look at this fairly common answer that is given whenever topics like these come up and make us uncomfortable.

God has made it very clear in Romans 12:3-8 that every redeemed person has a spiritual gift. Some of us know what ours is, some of us are still wondering, and some of us have never bothered to think about this at all. But every believer has one. The purpose of this post isn’t to delve into the spiritual gifts and how to know which one you have, but, rather, to determine if not having a particular gift is a pass at not practicing it.

It’s almost as if we believe that if we just say we aren’t good at it, then we can ignore it and go on our merry way.

So let’s unpack this just a bit. I feel like I may have bitten off a bit more than I can chew this morning, but let’s see what God’s Word says and see if I can then pull it all together. Let’s first turn to the book of John. This is one place that Jesus makes it very clear that we show we are His by doing what He commands–

John 14:21 He who has My commandments and keeps them, it is he who loves Me. And he who loves Me will be loved by My Father, and I will love him and manifest Myself to him.

We show we love Christ by keeping His commandments.

John 15:10 If you keep My commandments, you will abide in My love, just as I have kept My Father’s commandments and abide in His love.

The only way we can abide in Christ’s love is by keeping His commandments.

John 15:14 You are My friends if you do whatever I command you.

We have to assume the opposite is true, don’t we? If we don’t keep Jesus’s commands then we are not the friends of Jesus.

I John 2:3-5  Now by this we know that we know Him, if we keep His commandments. 4 He who says, “I know Him,” and does not keep His commandments, is a liar, and the truth is not in him. 5 But whoever keeps His word, truly the love of God is perfected in him. By this we know that we are in Him. 6 He who says he abides in Him ought himself also to walk just as He walked.

So this takes it even one step further and says we are lying if we say we are a Christian but are not following God’s commands. We can’t say we know Him and then ignore the Word and the commands therein. John makes it all too clear that true believers just won’t do this.

But we can be deceived into thinking that a certain commandment doesn’t apply to us. Let’s take a look at some of these commands that we tend to ignore, using the excuse that it isn’t our gift–

I Peter 4:9  Be hospitable to one another without grumbling.

Romans 12:13 {Be} distributing to the needs of the saints, given to hospitality.

Mark 16:15 And He said to them, “Go into all the world and preach the gospel to every creature.

2 Timothy 4:1-5 I charge you therefore before God and the Lord Jesus Christ, who will judge the living and the dead at[a] His appearing and His kingdom: 2 Preach the word! Be ready in season and out of season. Convince, rebuke, exhort, with all longsuffering and teaching. 3 For the time will come when they will not endure sound doctrine, but according to their own desires, because they have itching ears, they will heap up for themselves teachers; 4 and they will turn their ears away from the truth, and be turned aside to fables. 5 But you be watchful in all things, endure afflictions, do the work of an evangelist, fulfill your ministry.

Philippians 1:9-10 And this I pray, that your love may abound still more and more in knowledge and all discernment, 10 that you may approve the things that are excellent, that you may be sincere and without offense till the day of Christ, 11 being filled with the fruits of righteousness which are by Jesus Christ, to the glory and praise of God.

I John 4:1 Beloved, do not believe every spirit, but test the spirits, whether they are of God; because many false prophets have gone out into the world.

2 Corinthians 9:7 So let each one give as he purposes in his heart, not grudgingly or of necessity; for God loves a cheerful giver.

Proverbs 3:9-10 Honor the Lord with your possessions,
And with the firstfruits of all your increase;
10 So your barns will be filled with plenty,
And your vats will overflow with new wine.

I’ve picked these specific four things, because they seem to be the ones that are most excused because of not having the “gift”. Did I miss anything else?

Yes, God has given people special gifts and they help make the church run smoothly. But if they are only practiced by people who have these “gifts” then the Church would be sorely lacking, wouldn’t it? And that is where we find ourselves. Fewer people sharing the Gospel with others, fewer people giving of their first fruits, fewer people discerning, and fewer people practicing hospitality. And, perhaps, saddest of all, there are fewer and fewer even caring about these important things commanded by God in His Word as they are distracted and deceived by worldly worship, supernatural experiences, and mystical practices. The focus has turned inward to our own personal experience, rather than outward to how we can minister to others both by setting a godly example and by serving, according to God’s commands.

Not having a certain “gift” is not an excuse for not following God’s commands. Sure, it may come harder for us but that just means we need to work harder at doing it.

I will close with an example from my own life. I would not consider myself naturally gifted at hospitality. I have some friends who are really awesome at this. Their homes are lovely and impeccably clean, their food is delicious and served beautifully, and they make people who enter their homes feel comfortable and loved. My house is just a house and I am not all that into cooking. I don’t mind it, but it’s just not really my “thing”. And so I gave myself a pass on hospitality. But, more and more, the Lord convicted me about this. And I started to recognize a couple of things. First, I had to give up my pride. If my house isn’t cleaned or decorated just right, it’s okay. I am using it for His glory and I need to only please Him. I can’t worry about the critical eye of the “perfect homemaker”.  And, second, I don’t have to cook a fancy meal to be hospitable. I can just do coffee and dessert or buy pizza. We can do hot dogs at the fire outside or make ice cream sundaes. When I started thinking a little more outside the box it became so much easier.

I don’t have this nailed down and I certainly don’t practice it as often as I should, but I do feel like I’ve made progress and it came when I released what I felt it “should be” and started practicing what it “could be”. Perhaps this is true for all of the gifts. We don’t need to practice a gift perfectly. We just need to practice it to the best of our ability. That is all God asks of us. He will take it from there.

So let’s release our impossible expectations, our reluctance, and, most of all, our excuses and start following God’s commands in these areas. God will bless our obedience and the rewards will be great–here or in heaven and, often, in both places!

4 thoughts on “No Excuses”