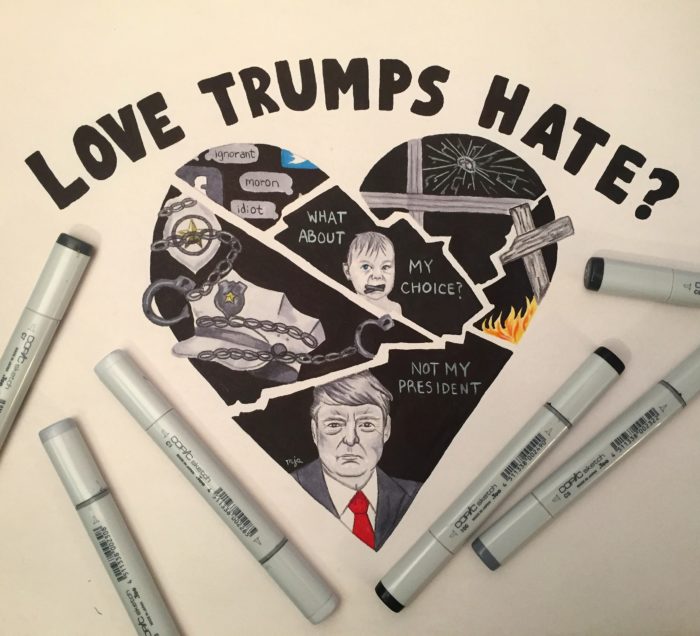 Last night my daughter showed me this picture she drew. It was her expression of feeling regarding the hypocrisy of what has gone on over the past few days. I have been trying to process it, as well. For a campaign that talks so very much about love and freedom, it would seem that love is only for those who are on their side and freedom is not for everyone.

Now, first, let me state that, just as I don’t want to be lumped along in with every person using the name of Christ, I don’t want to lump all Democrats together. I am sure there are many who are appalled at what people are doing in the name of their party.

But they are doing it nonetheless. Making threats. Spewing forth malicious venom. All while getting lots of coverage from the liberal media. I think we always knew that Hollywood leaned far left but this election has most certainly given us a whole new understanding of that, hasn’t it?

Even Trump’s ten-year-old son hasn’t escaped the vitriol of a world gone mad with hatred.

It is a person full of hate and wickedness. It is someone like…you and me.

It is who we could be without Christ. Who we were before Christ. Every single one of us has the same propensity to act in such a wicked way.

For you have heard of my former conduct in Judaism, how I persecuted the church of God beyond measure and tried to destroy it. 14 And I advanced in Judaism beyond many of my contemporaries in my own nation, being more exceedingly zealous for the traditions of my fathers.

15 But when it pleased God, who separated me from my mother’s womb and called me through His grace, 16 to reveal His Son in me, that I might preach Him among the Gentiles,

God saved Paul and he took on Christ’s righteousness, having his sin covered by the blood of Christ. He then went on to be used by God in tremendous ways.

In many ways, these people who are so full of hatred who we have watched these past few days are no different than Paul was or than any other person who has singled out a person or a group of people and persecuted them. Many times even unto death.

So the question that begs to be asked is what should be our response?

I have to confess as the new stories of such hatred have clogged up my Facebook feed, filled the airwaves, and covered our TV screens, I have not been filled with Christ’s love. My natural inclination is to feel hatred back. To reciprocate. To build the hatred between two very different groups of people with two very different dreams for this great country.

I remember Jesus, on the cross, in pain and agony and hated by the masses–

And when they had come to the place called Calvary, there they crucified Him, and the criminals, one on the right hand and the other on the left. 34 Then Jesus said, “Father, forgive them, for they do not know what they do.” (Luke 23:33-34)

Father, forgive them. Such love. Such incredible love.

And I remember this, too–God forgave me. Wicked, sinful me. He reached out in love and washed me with his blood. I love how Paul puts this in I Corinthians 6:9-11–

And so it is best not to forget who we were before Christ. Who we could be without Christ.

So does love trump hate? Yes, it most certainly does. But it is not the kind of love that hates when it doesn’t get its own way. It is not the kind that feels it can say or do whatever it wants to advance its agenda.

My daughter reminded me last night, as we talked about the hopelessness we feel in this world gone mad, how the one encouraging thing about this is how brightly we shine as believers in such darkness. She’s right, you know. Even a small light shines in the darkness with an intensity that would dissipate in the company of brighter lights.

And so this is our opportunity to shine with the true love of Christ. May we embrace the challenge instead of joining the hating, throbbing malicious mass on either side of the fence. Let’s stand firmly on the Word of God, loving with a love that doesn’t make sense to the world and speaking the truth of God’s Word without apology. And may we never forget who we were–who we could be– without Christ.