Our culture has an obsession with pictures. In fact, most of the younger generation has abandoned Facebook for more photo-based apps like Instagram and Snapchat.  There is no denying that we live in a world that is dominated by photos.

Photos demanding we have more stuff.

Photos telling us our homes aren’t enough. Our parenting skills are lacking. Our creativity is wanting.

Photos crying out that we just aren’t enough.

This has led to a culture of perpetual dissatisfaction and restlessness. If we aren’t careful, even those of us who are older can get caught up in this. We see warm family photos on Facebook and we think to ourselves–I wish I had that. We see teens winning awards, homes that should be in a magazine, and the creative projects of our talented friends and we think–if only…

Which I learned in a big way the other night.

One of our daughters planned a family gingerbread house contest. Building gingerbread houses has been part of our Christmas family traditions for years now but this is the first time we had a contest. We took photos of the houses and put them on Facebook and let Facebook viewers choose the winner.

My husband and I were a team and I was excited because he is a master gingerbread house builder! As you may already know, he is a landscape designer so he has a great eye for design. Unfortunately for me, he had also had very little sleep the night before and had been out for a snow/ice event the whole day. The timing was not going to be helping us to clinch a win!

We started out pretty well. He was manning the icing bag and I was holding the graham crackers in place. It was going pretty well until we got to the roof. Just as we carefully placed the last cracker in its designated spot, the whole thing caved in. It was around that time that our grandson started to fuss in his high chair, so I decided to take on baby duty, confidently leaving the building of the house in the hands of my very capable husband.

A few minutes later, I came back to find my husband decorating half of a house!

I found out that he had tried twice more and the house just kept collapsing. Now on a different day– with a little more sleep and without a cute baby grandson begging his attention nearby–my husband would have kept trying. But on this night, he gave up. I handed the baby to him (which is exactly what he wanted!) and told him I’d finish decorating.

Then it was time to take the photos for Facebook. We moved our house to just the right angle and ended up with this– 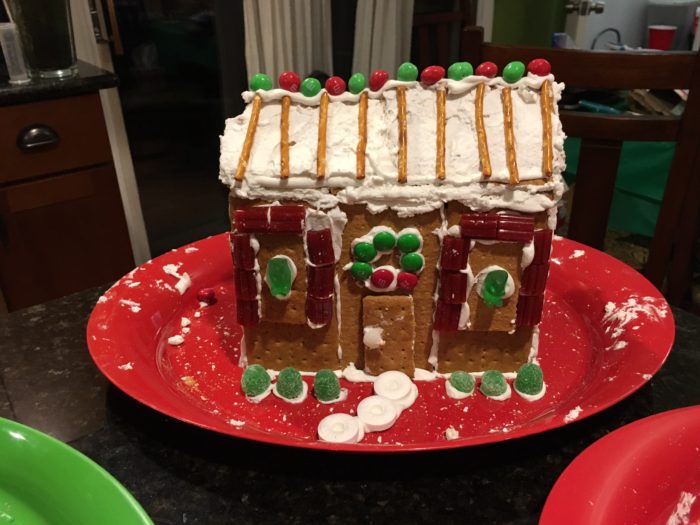 What the carefully taken photo didn’t show was this– 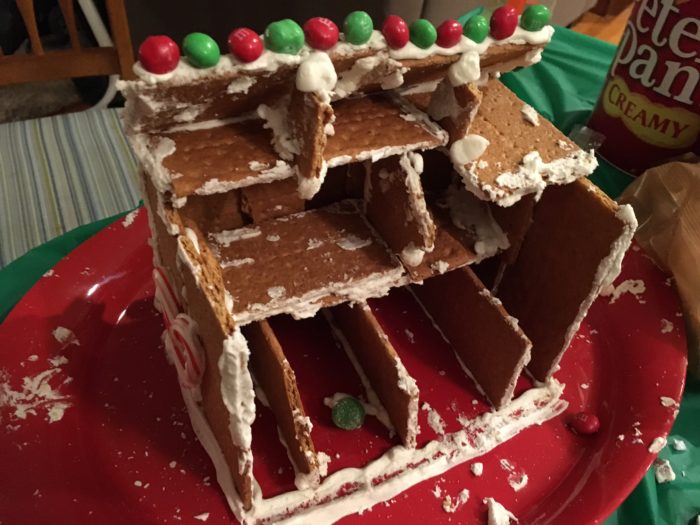 So, we had an adequate house for our contest photo (can’t say it is our best work, by any means) but what no one could see was that it was completely unfinished in the back!

Oh, how this is the same for so much of what we see in our photo-driven world. How much we don’t see!

The model’s desperate battle with anorexia.

The rebellious son’s antics of our picture-perfect church friend.

Social Media is a wonderful tool. It keeps us in touch with each other and we are able to cry and laugh and rejoice with one another. But sometimes the photos we see creep into our soul and give us a deep longing for something more. We start believing that God hasn’t give us enough and there is this illusive “perfect” life waiting for us out there somewhere.

Don’t be fooled! Not only is this untrue, believing this lie can potentially ruin marriages, families, and churches.

Scripture shows us that God is intentionally designing and directing our lives (Proverbs 16:9; Psalm 139:16), and it also shows us that it is God’s will that we be content with the life He has given us (Hebrews 13:5; I Timothy 6:6).

This can be a challenge for us in a world that is a swirling, writhing mass of discontentment.

If this is something you struggle with (like I do!), may I recommend the book The Rare Jewel of Christian Contentment by Jeremiah Burroughs. It is an old book so it isn’t easy to read, but it is full of profound wisdom in this area of contentment.

I hope that our gingerbread house incident hasn’t only reminded me of the inadequacy of a photo but that it has also reminded you. I hope that we are all encouraged to consider this area of contentment in our lives as we view the world around us–particularly social media. Choosing contentment when everyone else around us is in a constant state of complaining dissatisfaction is truly one way we can really stand out as believers in Jesus Christ.