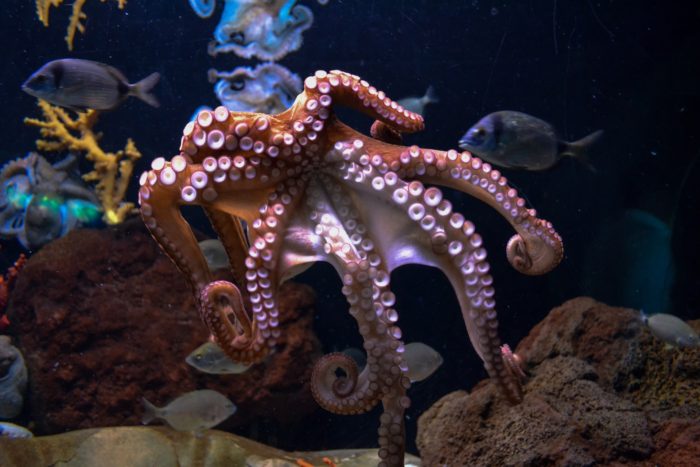 The other day I watched an octopus trying to capture a sea snake. Okay, let me fill you in on why I was watching that before I explain what I learned from watching it.

We were keeping our grandsons for the evening and we were at the point where we were all tired. The baby was sleeping in Grandpa’s arms and the two year old and four year old were sitting with me on the loveseat. For whatever reason (this isn’t something we normally do) we turned to YouTube to watch animal videos. The four year old was very interested in octopusses (octopuses? octopusi?) for some reason so I put “octopus” in the search box to see what came up.

He pointed to a video whose cover showed an octopus and a sea snake. I clicked on it to see if it was worthwhile watching. (There is so much not worthwhile and even downright bad on YouTube. I recommend that no child in your care ever be left on their own to scroll through without you to guard their precious eyes.)

What we saw upon clicking on the video was a scuba diver taking a home video of the ocean floor, where he had just happened to catch an octopus trying to capture a sea snake.

It was most fascinating to watch! The octopus used all eight arms in his battle with the sea snake. He would wrap them around his prey and pull him close to himself but then the sea snake would twist and turn and almost get away. Just when he thought he was free, the octopus would reach yet another arm out to grab him and pull him back. This went on for some minutes until finally the sea snake was able to escape the deadly tentacles and he swam away in glorious freedom. He would live to see another day.

I found this video so interesting on several levels. First–who knew there was so much drama on the ocean floor? Of course, I knew it, I had just never really thought about it before. Oh, how wonderful it will be to live on a new earth that has no predator and prey. Have you ever thought about that?

But I also thought of two spiritual analogies that go along with this video. I was trying to decide which one to write about and I’ve decided to just write about both.

First, I think Satan is a little like that octopus. He will try a multi-pronged attack to render us ineffective for Christ. He may tempt us with the sins of self-pity or lying, which we may wallow in for awhile and then just as we escape that sin we are tempted by another one that keeps us wrapped up and imprisoned for a time. As believers, we never stop fighting our enemy. We keep at it until the day we die, knowing that he has no power over us. We will always escape. Sometimes we may receive a short respite and be able to catch our breath, but it never lasts too long, does it? The war with our enemy and with our flesh requires constant attention. There is always another sin or worldly temptation that distracts from and taints a healthy walk with Christ. The “arms” of Satan are limitless and we can only experience victory by never giving up the fight.

But I’d like to spend a bit more time on the second analogy. As I watched that video, I looked at my husband and said I feel a little like that sea snake as I think about the year of 2020. In the midst of whatever game the powers-that-be are playing right now, we are fighting for our sanity and our peace.

It all started with the Coronavirus, one arm of a movement that would try to wrap itself around and suffocate our hope, our peace, and our joy. This arm tried to squelch us with its message of fear and control. Don’t leave your homes. Wear a mask. Close everything. Cancel everything.

Next came the arm of BLM, bringing with it riots, destruction, cancel culture and, with it, more fear.

And, finally, the arm of the election brought with it confusion, disgust, discouragement, and…even more fear.

Now we hear words like “dark winter” and “increasing lockdowns” and yet another arm of the giant octopus is trying to squelch our peace and joy and make us question our sanity.

But this world’s many-armed approach of breaking the spirit of the people can’t work on believers. Not if they are fervently praying and studying their Bibles. There is amazing (and supernatural) strength to be drawn from the pages of scripture. We are immune to even the biggest octopus (spiritually-speaking) if we are walking with God. He is our strength (Psalm 37:39). He is our fortress (Psalm 18:2). He is our Protector (2 Thessalonians 3:3).

Nothing can defeat us, nothing can steal our peace and joy, nothing can remove us from the care of the Good Shepherd and the Father’s love.

We must keep in mind that this does not mean physically. We may suffer terrible losses in this battle with the giant one-world octopus. We may even have to die. We really don’t know what is ahead. But we will be gloriously victorious in the end. Nothing–not even all the events of the year 2020–has the capability of defeating us, as believers, unless we forfeit by taking our eyes off Jesus and putting them on this world.

I admit it’s been a fight and it can be exhausting (as I’ve shared before). I imagine that sea snake, too, was exhausted, as he fought for his life. As we fight for our peace, joy, and–yes–even our sanity in a world full of bad news, violence, fraud, lies, and propaganda, remember that we will escape with all of these things intact, if we but choose to anchor ourselves in God’s Word.

I just cannot believe how I am watching the pages of scripture come to life right now. It is so confirming of the verity of the Bible. So don’t be discouraged. We saw all this coming. Yes, we are in a dreadful fight against evil but God will make a way of escape. And I honestly believe that may very well be soon now!

So keep on fighting. Don’t give up. I know it feels like we are at a disadvantage. And so we are, from the world’s perspective. But they are discounting the fact that God is all-powerful and that there are no sticky tentacles, or number of arms, or any power on this earth that cast us into a prison of fear and torment when God is on our side.

(Here’s the link to the octopus and sea snake video if you want to watch it yourself. It says it is 13 minutes long but we just watched the first four minutes).

5 thoughts on “Escape Is Promised”