Are you truly saved? Or are you faking it? Today’s testimony is from a pastor’s daughter who faked it for many long years.

When I first met Lorraine, years ago now, I was so refreshed by her vibrant faith and dedication to the Lord. I had no idea that her testimony included many years of only pretending to be a Christian. When she shared this with me, I realized she was probably revealing to me one of the most tragic and best kept secrets of the church: So many are just pretending.

2 Corinthians 13:5 says this:  Examine yourselves as to whether you are in the faith. Test yourselves. Do you not know yourselves, that Jesus Christ is in you?—unless indeed you are disqualified.

A few years ago, I was leading a Bible Study that Lorraine attended. One evening I shared my consternation over my lack of faith in a certain situation and my accompanying doubts about my salvation. Instead of delivering cliches and assuring me that “of course, you are saved,” Lorraine looked me in the eye and told me to examine myself carefully to make sure I was in the faith. At first, I was quite taken aback by this unexpected reply but after reflecting on this for several days, I realized that this was the kindest thing she could have said to me and I took her advice to heart: I carefully examined myself.

Where are we going when this life is over? The answer to that question stretches on into eternity and there will be no second chances. I hope Lorraine’s testimony will cause all who read it to examine themselves to see whether or not they are “in the faith.” It’s the most important question of our lives.

This is my testimony of coming to a saving knowledge of Christ Jesus; of my soul finding rest and peace at last. It is a story of deceit, lies, and sin—and of amazing mercy and grace.

If a child is born into a godly Christian home, they have great advantage. My father had been gloriously born again just a few months before my birth. All of my life I was taken to church, including Sunday mornings and evenings, as well as Wednesday nights. Sunday school, Vacation Bible School, Christian summer camp, and Youth for Christ were all part of my childhood. I went to revival meetings, mission meetings, and prophecy conferences. I was taught early on of the love of God, of the depravity of man, of the redeeming work of the Lord Jesus, and of the wrath of God on the unrepentant and unbelieving heart.

In other words, I had no excuse not to believe for I was surely taught the truth.

My childhood memories are very happy ones. Sometime probably around the age of ten I went to the altar and professed faith in Christ. My teen years were both happy and troubled (as teen years often are). It became evident to me during this time that whatever troubles I had, they were nothing compared to the trouble I was in with God! By this time, with the knowledge I had of the Scriptures, and the godly life my father modeled before me, I realized that I was not saved. I had not been born-again. I was not a child of God but, rather, was a child of wrath.

When I was sixteen, a pivotal moment is etched in my mind. There was nothing in my life at that time that would have given a perceptive father any confidence that his daughter was right with God in spite of her profession of faith and one day, with a very heavy heart, my father asked me if I was saved. Did I know Christ?

Instead of revealing my desperate need for Christ to my father, I boldly looked him in the eye, and very consciously and with frightening ease, lied right to his face about the state of my soul. I told him I was saved so that he would stop bothering me.

That lie would be deeply entrenched within my heart and life, and for many years my ugly pride would prevent me from ever acknowledging my desperately lost condition. Pride nearly carried me to hell, to everlasting separation from God, to eternal damnation.

Within the next few years, I would fall in love, marry, have a daughter and three sons, teach Sunday School, become a youth leader, and attend church every time the doors were open (which was frequently). And yet…

I lived in dread and fear of dying or of Christ returning because I was most certainly not ready to meet a holy God.

Years passed. By this time, I was an expert at living this carefully crafted and concealed lie of pretending to be this wonderful Christian—which I knew I wasn’t.

I learned something about the Almighty God, the King of the Universe: He doesn’t make deals.

Shortly after this, during the last night of a revival service, the Sprit of God powerfully worked upon my heart and God reminded me that “today is the day of salvation”.  A great battle was being waged for my soul and, though I was so terribly lost, without hope and without God, the thought of publicly walking down that long aisle was just too much to ask of my prideful self and held me back. After all, whatever would people think?

The last verse of Just As I Am called me to come and be saved at the end of that service but I refused. I left that service still lost, still trying to find my own way to God. After that evening, it was like God said “alright, Lorraine, do it your way!” and for the next two years God left me to myself. There was no conviction or striving. I was utterly alone. There was a deadness in my soul and I plunged into despair, believing that I had been totally abandoned by God.

With my sin heavy upon me, I was at the point of being willing to do whatever was necessary to find peace with God and rest in the Lord Jesus.

At the end of that two years, another revival meeting was held. While I was not particularly affected by either service or the special speaker that Sunday, this was the day that I came to the end of myself.

We came home that evening and put the children to bed and then I sat down heavily on the sofa, deeply shadowed by much misery and despair…feeling like I could not live yet knowing I could not die.

My husband, Dick, sat down beside me, sensing something was terribly wrong. Finally—after years of carefully guarding my secret—I told him that I did not know Christ. I told him I had never been saved and that now I was quite sure I could never be saved. I truly believed I had “missed my opportunity” for grace.

He tried to assure me that I was simply backslidden—that I simply needed assurance of my long-held faith. But I would not be consoled. I kept telling him I was lost. If anybody ever was lost, it was me! I then told Dick that I wanted to go before the entire church body and tell them I had been a phony all these years and to ask for prayer to God on behalf of my lost soul. I was now far past caring about what anybody thought of me. I had hit bottom and was so broken.

It was very late by now and we decided to wait until morning to go to talk to my dad—who was actually the pastor of the church we attended (Yes! Pastors’ kids can look so good but still be faking it!)

Early the next morning, we took the children to my sister’s house and were soon knocking on the parsonage door. We went into my father’s study and I told him what I had told my husband the evening before.

I had so perfected my role-playing of “good Christian” to such an extent that even my father was unbelieving. “Oh, Lorraine, you are surely just backslidden,” he said over and over again. Again, I said no, I have never been saved. And now I can’t be saved. Surely it was too late.

Then my wise father gave me the first words of hope that I had had for many years: Lorraine, the fact that you are here is evidence that God has not given you up!

My dad suggested that we talk with the special speaker who was visiting our church for the revival meetings. This speaker had seen many just like me—pastors, missionaries, elders, Sunday School teachers, and others—who had made empty professions of faith perhaps in their childhood or as a young adult but had finally and genuinely come to Christ after many years of service. He said to me, “Lorraine, why don’t you ask Christ to save you?”

I had been down this path before but this time was different. This time my will was broken and I had been humbled. I was well aware of my sin and my need for a Savior. Had any sinner prayed such a simple prayer or one so heartfelt as I did that October morning? In simple, believing faith I received Jesus Christ as Lord.

Lightening did not flash. I heard no voice from heaven. But God has said in His Word: as many as received Him, to them gave He power to become the sons of God, even to them that believe on His name, which were born not of blood, nor of the will of the flesh, nor of the will of man, but of God. (John 1:10-12).

I had received Christ through faith and I was born again. My life was radically changed—For God hath said: Therefore, if anyone is in Christ, he is a new creation; old things have passed away; behold, all things have become new. (2 Corinthians 5:17)

and also: who Himself bore our sins in His own body on the tree, that we, having died to sins, might live for righteousness—by whose stripes you were healed. (I Peter 2:24)

Now I sing with gladness!–

My sin—oh, the bliss of this glorious thought!—
My sin, not in part but the whole,
Is nailed to the cross, and I bear it no more,
Praise the Lord, praise the Lord, O my soul!

I greatly fear that many sit in churches, as I did, with an empty profession, their hearts becoming increasingly harder and their doom sure. God will say to many as they parade their works before Him in that great day: Depart from me, I never knew you.  (Matthew 7:21-23)

If you are still in your sins there is a mercy seat. The door of grace is still open. The Savior has said all who come to me, I will in no wise cast out. (John 6:37) Flee then to Christ. Look to Christ. Plead with Christ to save you!

In this world of pleasure, acclaim and applause, of fame and riches, there is nothing, nothing, nothing that can be compared to knowing Christ Jesus the Lord. He is the treasure of all treasures. Take ten thousand worlds and they are nothing compared to the infinite, amazing worth of knowing the Lord Jesus Christ. 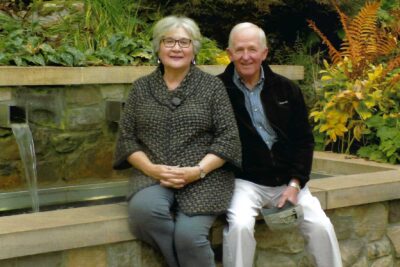 Find other wonderful testimonies of God’s amazing grace and never-ending mercy in the lives of His children here.