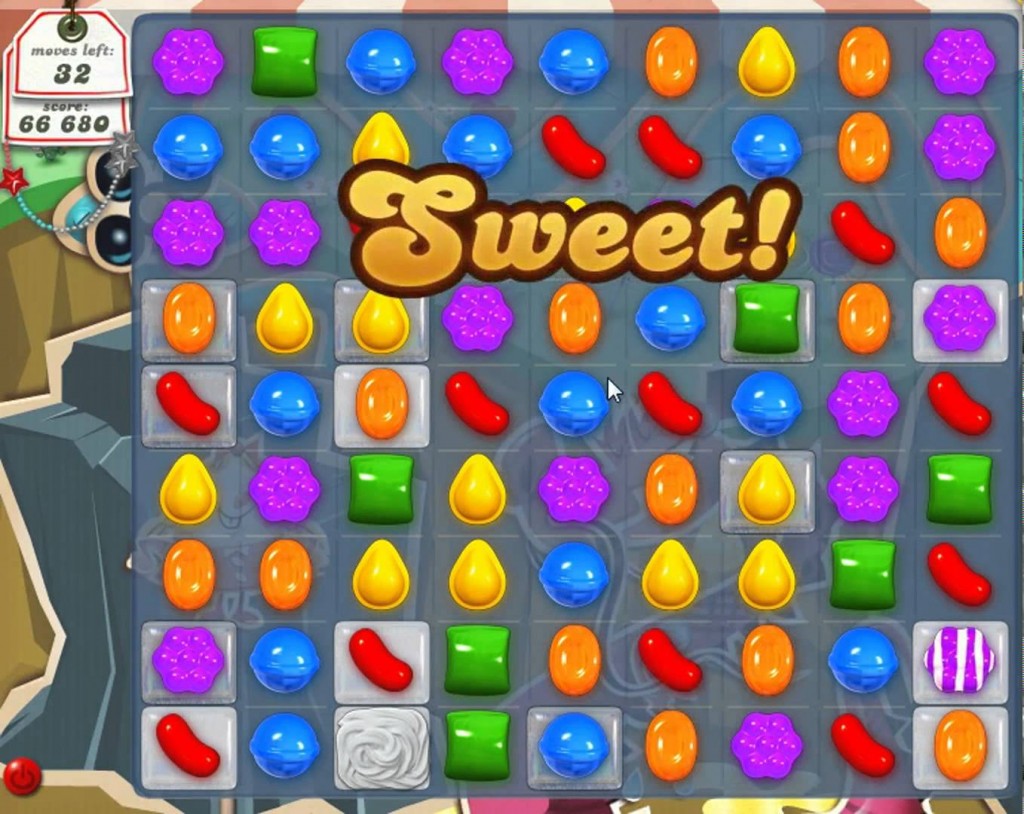 It all started with an innocent question asked by a friend.

“Do you play Candy Crush?”

I don’t like to waste a lot of time playing iPad games, but I do enjoy a half hour in the evening to wind down and I was in need of something new and fresh. I thought I’d check into it.

At first, I sailed through the levels, enjoying the challenge of moving the little candies into rows of three. It reminded me of the original Bejeweled game, which I loved and no longer exists (to my knowledge). And so, about a week ago, Candy Crush became my game of choice.

As I moved up in levels, it became increasingly harder to pass. And if you failed so many times, a message would pop up, telling you that you would have to wait for so many minutes before playing again.

But, lo and behold, this could be avoided by paying for extra lives. Or extra treats to help beat the levels. Only $.99.

Now, I like to play games but I’ll be darned if I am paying anything to beat a level. That seems almost dumber than gambling. At least in gambling there is a slight chance to come away with more than what you put in. Apparently there are plenty of people who do pay, however. A website claims that Candy Crush makers rake in almost a million per day from people who pay to play.

So, if I wasn’t going to pay, how was I going to beat this thing? Well, at first I figured out that if I changed the date on my iPad, I could continue playing. It would fool the game into thinking that my “Life” stash was full again. Great. Now I could just play.

But, alas, I got to a very, very difficult  level. I just kept playing and playing the same board, all the while telling myself how utterly ridiculous I was to waste time on this. But, finally, I passed that level and then went onto the next level. I passed that one after only a few tries.

And then I got to one that truly appeared impossible.

I kept playing and playing and the screen, offering the little treats for only $.99 became more and more appealing. Just once wouldn’t hurt, right?

Surely, I can get this. I continued to waste time trying to beat a level that I am still not sure it was even possible to beat without paying anything.

And then I realized something.

I had been fully sucked in. And I decided to escape while I still could. (How in the world would I explain Candy Crush charges to my husband??)

And, so I exited the game, deleted it from my iPad, and chose to move on with a more productive use of my time.

But my time spent on that game showed me one thing.

It showed me just how we get sucked in to sinful habits.

You see, at first it doesn’t cost much. There is a great deal of satisfaction and no payment–

~One cocktail or beer relaxes us and helps with our conversation skills.

~A few minutes looking or listening or thinking about something ungodly doesn’t seem to hurt a thing and gratifies something fleshly inside of us.

~A few minutes at a gaming table is all great fun.

~An evening spent playing video games is a fun evening with friends.

~Eating a pastry that is loaded with calories just melts in your mouth.

That first taste doesn’t cost us anything and the rewards are great. But, if we aren’t careful–if we aren’t self-controlled–we can get caught up in the rewards and we need more and more to yield the same feelings of satisfaction. That is what addiction is and it can happen with almost anything.

I think it is clear that there isn’t any sin in having a drink or a delicious pastry. There is no sin in spending the evening playing video games (if it is a video game that is not dishonoring to God in any way). But if we become compelled to have more and more, we will get caught in a web that becomes almost  impossible to escape from.

Self-Control. A highly under-rated character trait that has almost disappeared from our world. I can tell you that it is one that I struggle with daily.

But if we don’t cultivate self-control in our lives–if we aren’t even aware of the battle– we will, at the very least, end up wasting our time on unimportant, trivial things, or, at the worst, end up destroying our family, our health, or our very lives.

And, so it is good-bye to Candy Crush for me. It is so not worth it. Glad I found out before I wasted too many of the few precious hours that make up my life.  Now…to apply that same philosophy to a few other areas of my life that need some work!