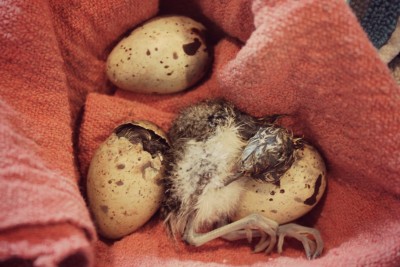 I first thought about the chirping when we were about ten minutes from the nursery.  It was quiet and rhythmic.

I leaned over the back seat to look through the plants we had there but didn’t see anything.

When we stopped spontaneously at a little greenhouse down the road, I jumped out of the truck and opened up the back door so I could look more closely. I could still hear the cheeping, but couldn’t see a thing. All plants looked normal and no baby birds were to be found anywhere. Okay, then.

Fifteen more minutes down the road, it was starting to drive us a little crazy. There had to be a nest in one of the plants. When we stopped to eat, we were determined to find it. We both got out and started rooting through the plants. Finally, Eric said we probably won’t be able to find it until we start unloading the plants when we get home. He took one final glimpse at the plants.

Camouflaged perfectly against the background of soil, was a newborn baby bird and three more eggs in the pot of the peony I had picked out. Of all peonies to choose, I had picked out the one with the bird’s nest.

We didn’t really have time to return it (although if we had to do over that is exactly what we would have done. I keep thinking of that poor mama!) and so we texted ahead to my sixteen-year old and told her we were bringing home a baby bird. I looked up the eggs and figured out that it was a killdeer nest.

My daughter prepared a little box and googled how to take care of baby killdeers. She was quite excited for this little adventure.

She got the hang of how to feed the little creature and it actually ate for her. As she was feeding it, we heard chirping coming from the eggs. Did you know that killdeer babies cheep before they ever leave the egg? Now you learned something new for today…

The baby was named Dexter and he survived the first night! Not only that, but baby number two was starting to peck his way out of his shell. By half-way through Saturday, he was laying there in the dirt–a tiny pile of limp, wet feathers and gangly gray legs. He was named Cheepers and my daughter did her best to feed this little motherless creature.

They survived most of the day, with my daughter taking such good care of them. But she wasn’t their mother and they were so young. It was really an impossible task from the beginning. We kept telling ourselves– they are only birds. They are only birds. It was heart-breaking to watch them grow weaker and weaker.

By Saturday evening, Dexter had perished. We had run an errand and when we returned, he lay there stiff and cold. It was so sad. Cheepers wasn’t looking too healthy by that point, and so it was no surprise when I came downstairs the next morning to find him lifeless in his little makeshift nest. What was a surprise was to hear one of the eggs chirping loudly every time I walked by the box! There was still a baby bird trying to make its way into the world. We tried to keep the egg comfortable and warm, but by afternoon even that chirping had stopped and the box was instead filled with a foreboding silence.

I just kept thinking that those poor babies were simply born to die. We did all we could in our power to keep them alive, but there just wasn’t any way we could replace their mama. We have access to almost anything we could want or need, but we didn’t have what we needed to rescue those babies. That was completely outside the realm of any power we humans have.

All in all, it was such a disheartening event for us. I know lots of people would say they were only baby birds, but there is something in us that hates to see death in any living creature (insects and snakes don’t count…)

But the parallel to our lives cannot be ignored.

We can be the best person we can be. We can obey the ten commandments and feed the poor.

But we still can’t save ourselves.

We have access to almost anything we could ever possibly want or need.

But we still can’t save ourselves.

We can delude ourselves into thinking we are a good person.

But we still can’t save ourselves from the horrible consequences of sin.

We can do all in our power to make it to heaven, but we won’t get there without the saving blood of Jesus.

Oh, how humans so easily fall for the “good person” trick that Satan uses. How many have fallen prey to this philosophy throughout history? And yet, we lay there dead in our sins and without hope if we don’t know Jesus.

God has provided one way of salvation and that way is Jesus. (John 14:6) All other efforts are vain and futile.

If we know this, then we should be sharing it with others. Let’s not get so distracted with our own circumstances that we don’t tell others about the Great Physician–the only Person who can reconcile us to God, remove the sting of death, and give us eternal life.