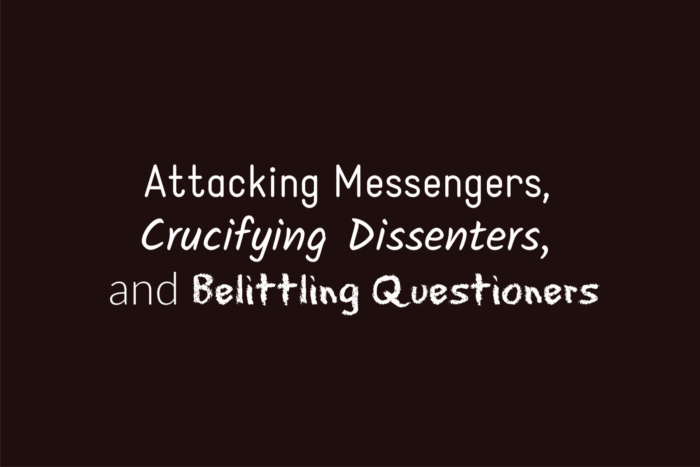 Over the past twenty years or so, I have experienced the vitriol of those blindly following a person or a cause. Social media is the mecca for such interactions and to post a dissenting comment has made anyone come to expect sarcasm, anger, and even hatred. I have talked with others who have experienced this, as well.

This dynamic takes place anywhere people are gathered online. It seems a lot worse right now, but perhaps that is because so many of us are relegated to online interaction. Somehow when people get online, they remove all inhibitions. They would never, ever talk to someone face-to-face the way they talk to someone online. At least, I hope they wouldn’t!

But there are a lot of debates and disagreements and controversies going on online right now and I wanted to make you aware of a few things to look for as you watch this all take place.

By the way, while this does take place in the secular world quite a bit, we understand that they are unbelievers and have rejected God’s ways. While it is interesting to observe, it is certainly not surprising. However, it borders on tragic that this is the same approach of many in the evangelical circles. People that you trust. I encourage you to look for these as you encounter quarrels and controversies in these current days.

It is a three-pronged approach, where one, two, or all of these prongs may be used to put down the “enemy”. I wanted to make you aware of them because it is critically important that we recognize them and then move them aside in order to look at the real issue at hand. They are a decoy. They are a smoke screen to draw your eyes away from the real issue. Don’t be deceived.

Here are the three prongs–

1. Attack the Messenger. Instead of answering the accusations, they will attack the messenger. They will call them all kinds of names, put them down, make them out to be unloving, unkind, divisive, and unintelligent. They will dredge up old sins. They will cast doubt on their integrity. This trick is as old as the books, but don’t let them fool you. And, hey, in some cases, maybe the person sharing the message is some of those things. This still doesn’t release us from investigating to see if what they are saying is true. Beware character assassination. It is a bright red flag and should lead you to mistrust, rather than to trust, the person conducting it.

2. Crucifying Dissenters. How dare you disagree? You are NOT allowed to disagree and so we will crucify you with our words. I am not sure when the world changed but I see leaders encouraging their followers to act like this. Secular and Christian alike, their followers are using words to spread venom and hatred and, rather than discouraging this type of thing, the leader seems to encourage it. This is because it is an important part of the three-pronged approach. They are counting on their followers to silence anyone who disagrees. Blind loyalty yields a passion that will stop at nothing to defend its subject.

As I write this, my heart is heavy. It is especially heavy because I see this being used in the Christian world as much, or even more, than in the secular world. It is a treacherous world we live in these days. Please be on the look-out for these things. They are signs that all may not be right. Not a guarantee, of course, but definitely worth some research.

Before I close, I want to add one more {very important} thing–

As believers, we are called to respond differently! People are watching us. They see what we post and they are reading it.

Make no mistake about it: We are in a spiritual war.

As we fight it, let’s be an asset to our King through truthful, loving, and kind interaction with others. Satan wants nothing more than to create havoc and chaos within the church. We can’t fall for his bait.

I don’t know where all this is headed. Or rather, I think I do. The world and the church has gone off in a direction over these past twenty years or so that I find most disheartening. But, thankfully, we know God is still on the throne. As His servants, may we carefully discern and examine all things. As His witnesses, may we do all we can to be a bright and shining light in this increasingly darkening world.