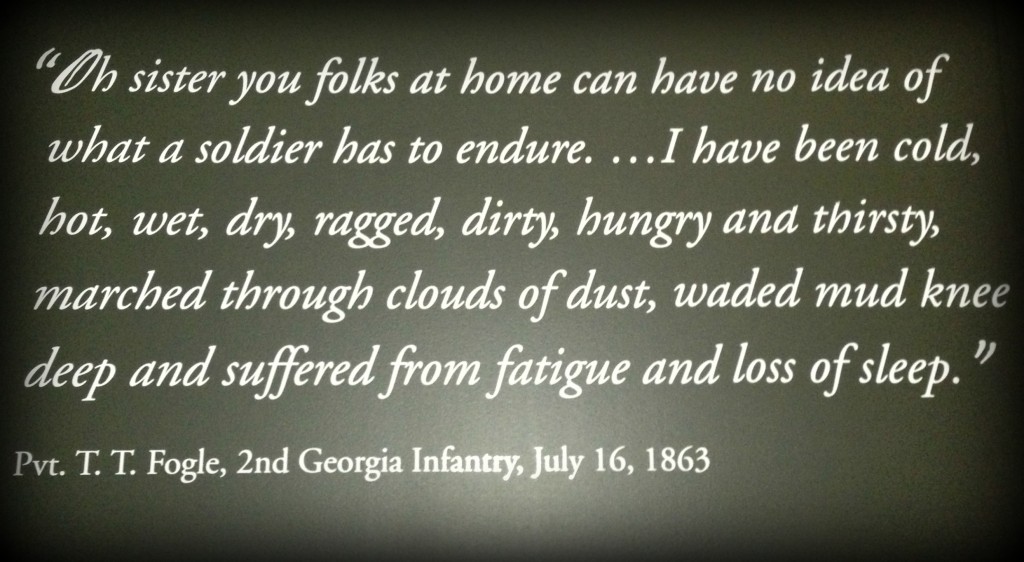 Next week it will be 150 years since that terrible battle of Gettysburg. Over the weekend, we spent some time there visiting the  delightful little town. Only a few bullet holes gave evidence that such a terrible battle had been fought there. As we drove through the beautiful, rolling hills of the countryside, there wasn’t a sign of the tragedy anywhere. Sure, there were a few cannons and fences–but the human tragedy that played itself out those three days wasn’t seen on any of the faces around us. 150 years is a long time. Long enough to recover from the terrible human losses and financial setbacks.

I was about halfway through when I came across this quote written by a soldier named T.T. Fogle and taken from a letter to his sister: “O, sister, you folks at home have no idea what a soldier has to endure…I have been cold, hot, wet, dry, ragged, dirty, hungry, and thirsty, marched through clouds of dust, waded mud knee deep, and suffered from fatigue and loss of sleep.”

It reminded me of Paul’s passage in 2 Corinthians, where he talks about what he has endured for the sake of the cross–

That passage reminds me that we believers are soldiers in a battle. For a long time now, we have been able to hang around the edges of the battlefield, enjoying our accommodations quite nicely. But the battle here in this country is heating up considerably. It only takes a few moments of  internet surfing or tv news-watching to realize it. And we are being flanked on all sides — from the media, the lawmakers, and the so-called church, which has twisted Christianity into something that would be unrecognizable to the godly men and women who have gone on before us.

Are we prepared to fight the battle? Or are we still back in our tents playing games?

I make no prediction as to whether this country will survive this attack on its core values. That battle will be won or lost by the will of God.  But the fight, more importantly, is for the destiny of each human soul. The battle is raging in our homes, our churches, and our workplaces. Are we standing up for the truth? Are we willing to take a bit of ribbing or name-calling or even the loss of reputation to stand for what is right?

I think we can join Sallie Myers, who said this a few days before the battle: “We may expect a battle both near and soon. God help us! For surely our cause is one of justice and humanity.”

The beauty and hope of this whole battle is the future! Just like Gettysburg has recovered 150 years later, so we, too, shall be fully recovered if we know Jesus Christ personally. The hope of eternity grows brighter and brighter as the battle before us grows more and more frightening. We know where we will be in 150 years. Let us hold on to that hope, as we fight in the trenches here.

To close, I leave you with this quote from the NY Times from those days, which profoundly describes the heated battle we are in for this country right now: “The contest touches everything and leaves nothing as it found it. Great rights, great interests, great systems of habit and of thought disappear in its progress. It leaves us a different people in everything.”