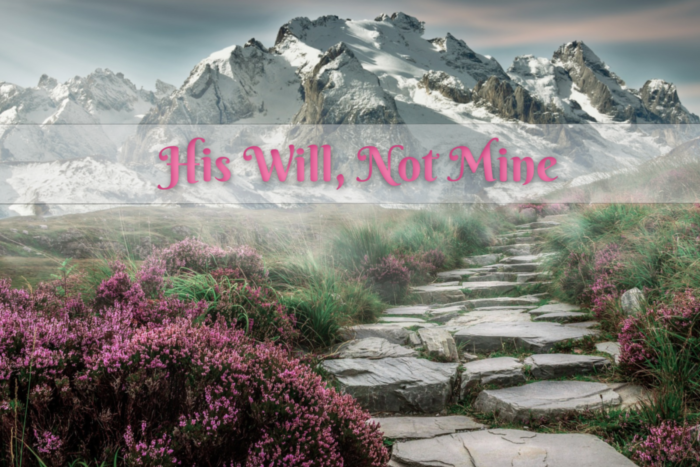 Shortly after three of our four kids left the house (which happened within a little over a year), I found myself fairly troubled. Perhaps I even experienced a case of slight depression. I was not where I wanted to be. And, in fact, what made it worse was that I didn’t even know where I wanted to be. Did I want to go back to being a mom of preschoolers or teen-agers? No, I certainly didn’t want to do that. But I also knew that I didn’t want to be at this place where I had no idea who I was or what I was supposed to be doing. I had left my comfort zone of full-time mommyhood behind me and had no idea what lay ahead. Compounding this were several other dynamics that, all combined, thrust me into a rather dark period of my life.

Many times, during my quiet time, I would complain and simply pity myself (ashamed to say it but true) because my life had gone by so quickly. I wasn’t ready for this new stage. I just wasn’t ready. I had been very content and comfortable in my mother role and I just wasn’t ready for it to be over. Tears would fall as I reflected on the past. The thought that kept repeating itself over and over in my mind was “This isn’t what I want. This isn’t where I want to be.”

Even as I had this thought, I recognized the utter selfishness of it. If I truly believed the Bible, then I knew that my life should never be centered on what I wanted. While in my head, I knew that I exist on this earth to know God and to make Him known, my emotions put up a giant struggle to be heard and obeyed. I knew there was a much bigger picture (and that what I wanted was fairly irrelevant in that picture)–and yet– even as a committed believer in Jesus Christ, I found myself in a tremendous battle with my emotions.

Thus I was thrust into God’s kiln to be tested and tried in a way I had not experienced before.

(Let me just say here that this is one of the things in my life that God has used to teach me submission to His will. I am aware that there are some women who long for the day when their kids leave the house–I just wasn’t one of them. I know this will seem utterly foolish to some of you and you won’t get it at all. God may be using or has already used something totally different in your life. Honestly, I never had any idea that my whole identity and a good chunk of my security was wrapped up in my role as a mom. But I also recognize that not all of you will relate to this. I do hope this post takes the reader beyond the details and focuses more on learning how to respond when something we want is refused or taken away.)

The last five years or so have been some of the most difficult of my life. I thought I knew who I was and then, suddenly, I realized I didn’t know who I was at all. God gave me the opportunity to live out all that I had talked and written about all through the years and I was failing. Miserably. I became slightly obsessed with figuring out who I was supposed to be now that my mother role was just about over. I faced a whole new wave of uncertainty when my baby left for college a few years later. (I still don’t really know exactly where God is taking me, by the way. Every time I think I am supposed to go one way, God shuts the door and pushes me another direction. What I am learning through all of this is that I need to simply submit and yield without fuss. He is teaching me to be content even when things don’t go at all as I had planned. It’s an excruciatingly slow process and I doubt I will ever be able to say that I have arrived in this area of my life.)

There were two especially bright spots during this time and I treasure them both greatly. First was the birth of my grandchildren. Kids just bring sunshine wherever they go. How can you not smile when they are around?

And, second, and much more importantly, was how aware I became of my need for Jesus. Up until this time, if I am being totally honest here, I thought I was a pretty good person. Yes, I needed a Savior but not as much as some people did. I am almost ashamed to write it and I never officially “thought” it, but as I look back, I can see this is what I believed.

But when I came face to face with my self-centeredness and spoiled-brat mentality, I recognized pretty quickly just how utterly sinful my heart is. My appreciation for Jesus Christ’s sacrifice on the cross has increased a hundred-fold in the past few years.

I am still on this journey of putting what I want on the back burner while focusing on what God wants. And He keeps giving me opportunities to yield to Him and His will. It’s not been easy but I do feel like I am moving the right direction.

Why am I sharing this now? I don’t really know except that it all came to mind when Eric and I had the opportunity to spend a few uninterrupted hours talking with my brother (Pastor Dean) a few weeks ago. As most of you know, he lost his wife in April after a year and a half battle with cancer. Even as I write this it still seems surreal. My sister-in-law of 20 years is now with the Lord. Still feels like it just can’t be. As we talked, he shared how he had given Grace to the Lord before he even met her. All he owns is God’s, and that included his much beloved wife. His commitment to Christ is truly a beacon of light in the ever-increasing self-focused, dream-following, mainstream church.

One of the things he said that sort of summed up what I have been struggling through is that he doesn’t ask what he wants but always tries to focus on what God wants. Of course, no one can do this perfectly but this should be our goal.

Sometimes our wants line up with God’s. And sometimes they don’t. This can happen in big things like the heart-breaking devastation of losing a wife and mother to cancer. God called Grace home, despite her family’s longing for her to stay here on this earth with them. Other times, it’s an unimportant, mundane thing where our will doesn’t line up with God’s–like a mom dealing with the empty nest. My time as full-time mom had passed far too quickly and was never going to return, despite my deep sadness and the disconcerting uncertainty that accompanied it. God uses both the big things and the little things to test and grow us.

Perhaps you are facing something totally different. A move you don’t want to make. A lost job. A child that has turned away from the faith. Financial burdens. Family strife. Elderly parents with health issues. There is no end to the problems and struggles that we face on a daily basis. And, often, in these situations our wills don’t line up with God. Many times God seems to says no and the burdens seem to last forever. Or He says wait and we find ourselves stalled in a place we just don’t want to be.

Many times our “wants” are centered on relief from hurt and pain. Our “wants” are often focused on experiencing a carefree, easy, comfortable, and happy life that is free of burdens and problems. But there are also many wants that we have for others, like the salvation of a loved one or relief from pain, disease, or addiction for a family member or a friend. These are wants not centered on us but still leave us wondering when they go unanswered.

And, yet, so often it is when God says no or wait that we experience our greatest growth. These are also the times that we get to shine with real biblical faith before the dark world and the false church. It is easy to smile when things are going well. Having hope, peace, and joy in the hard times–well, that’s when we really stand out as believers. It is actually when we don’t get what we want that we have the potential to be the most effective for Christ!

In this false religion that goes by the name of Christianity, we find people obsessed with self and purpose and following dreams. It is so easy to fall prey to this same mindset if we aren’t extremely careful.

There is a little verse in John 3:30 that flies directly against self-centered Christianity–

He must increase, but I must decrease.

He must increase but I must decrease.

What I want doesn’t really matter in the scope of life. The critical question in regards to our lives is “What does God want”?

Luke 9:23 clarifies this thought even more–

Then He said to them all, “If anyone desires to come after Me, let him deny himself, and take up his cross daily, and follow Me.

If we desire to come after Christ, we must deny ourselves. We must pick up our cross and follow Him. Does this sound like a self-centered faith to you?

One of the most effective tests to find out just how yielded we are is when God’s will doesn’t match ours.

Do we put up a fuss and complain (even if it just to God or to ourselves)? Do we desperately try to fix situations ourselves? Do we grow depressed or anxious? These are all signs that we are putting our own wants and desires ahead of God. They are showing us that we don’t really trust God and His sovereignty in all areas of life.

It is a hard lesson to learn. To say the least.

I remember talking with my sister-in-law a few months before her death. She told me that she was at peace. That she had fought her battle with God’s sovereignty ten years earlier when she had been diagnosed with cancer for the first time.

Oh, dear readers, until we can bow before God in all things, we will not experience His peace.

His will, not mine.

When we fully accept God’s will for our lives and trust that He knows best, we will find the peace and joy that is promised in the scriptures. No matter what disappointment and hurt and pains swirls around us. He will never leave us or forsake us. We will never, ever be alone.

Not getting what we want is not an indication that He doesn’t care. Instead, it’s a reminder of our sinful, demanding nature–like an ant shaking its fist at a human being is a little how we must look to the God of the universe when we demand and manipulate and sulk to get our own way.

His will, not mine.

May that be what carries us on through the difficult days and the unanswered prayers.

6 thoughts on “His Will, Not Mine”