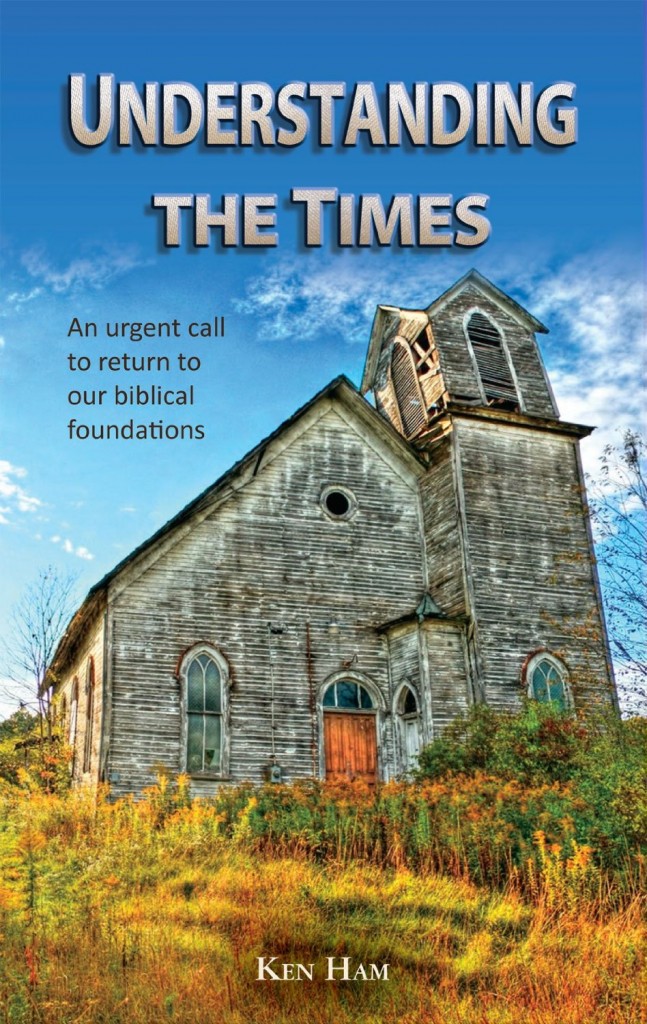 Years ago, I gathered my homeschooled brood and went to a local conference where Ken Ham was the main speaker. I can honestly say that was some of the most valuable hours we had in homeschooling. That day he made a compelling case for why our view of biblical creation is essential as believers.

If you ever have a chance to hear him speak, I hope you will take it. But, until then, I am sharing one chapter from Ken Ham’s book called Understanding the Times that summarizes why this issue of Creation is so important. You can find this book free for Kindle right now. I highly, highly recommend it. It is a very valuable tool in not only helping us understand why it matters but in also giving us some basic points in defending biblical creationism. You can find it here.  Now, on to the excerpt I have chosen for today.

That is what fundamentally has changed the culture. And we helped, as the Church, when we accommodated the world’s teaching. Just as the Israelites took the pagan religions of the age and incorporated idolatry into their thinking, so we have done the same: evolution and “millions of years” are actually the pagan religion of this age—and the Church has adopted it. We are no different than the Israelites—therefore we should expect no difference in regard to what God does in dealing with us.

To summarize, there has been an attack in our age. The Church is reaching out to the world, preaching the gospel, and conducting all its programs;  but there has been a vicious Genesis 3 attack upon God’s truth, casting doubt upon the creation historical account by asking “Hath God said?” This attack comes under the guise of “millions of years.” In response, much of the Church said, “At least it didn’t hit the cross, so we are OK.” True enough, it did not hit the cross directly, but it hit the Word from which the message of the cross comes.

Much of the Church continues to say, “It didn’t hit the cross.” Had this attack of the world upon the foundations of Christianity been a direct attack on the cross, they would have said, “Oh, this is an attack on the gospel.” Instead they have said, “You know, this ‘millions of years’ attack on Genesis is just a side issue.” No!—this attack is hitting the very Word of God itself, from which the gospel comes.

And then the attacks multiply and come stronger and faster: evolution, “millions of years,” ape-men, and so on. For the world, it is a direct hit on the essential foundation of Christianity. “Aha!” the world says, “We’re undermining the Word of God. We shall be free from all its negative limitations at last!” And much of the Church continues to respond with only, “But it didn’t hit the cross.”

One of the things I have noticed about American churches is that, for a lot of people, they are more concerned about “future things.” They say, “Oh, Jesus is coming back again.” Now, don’t get me wrong, eschatology[35] is important. But the problem is just this: millions of Americans bought the “Left Behind”[36] series, but most of those millions of Americans did not buy creation books—because that is considered “not important.” They say, “Beginnings don’t really matter,” and yet the issue of origins is exactly where we have lost the authority of God’s Word in this age.

The solution is that we must be restoring the foundation of the authority of the Word of God. We must be boldly confronting the false foundation that believes it is man who determines truth.  We need to take hearts and minds and see them changed in regard to the Word of God, to stand on the Word of God, to have a consistent Christian worldview. When true Christians, equipped Christians, get into politics and on school boards, the culture changes. Out of the heart a man speaks what he believes to be true.

“And they that shall be of thee shall build the old waste places: thou shalt raise up the foundations of many generations;  and thou shalt be called, The repairer of the breach, The restorer of paths to dwell in.” (Isa 58:12)