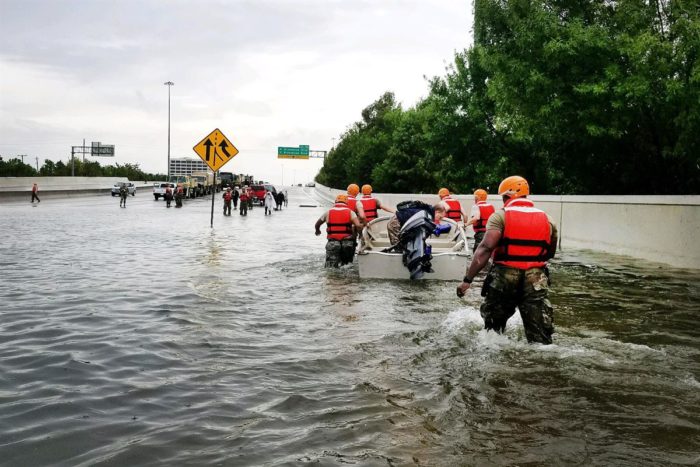 During this past week we watched as a historical hurricane named Harvey released its fury on Texas. In its wake, it left thousands of lives uprooted and topsy-turvy, destroying both homes and businesses with its winds and water. A few precious lives were even lost in this terrible storm. It will take a lot of time and an enormous amount of money as the area works on drying out and rebuilding.

While I am always generally interested in the weather (maybe it’s because I am married to a landscaper?), this particular storm captivated my attention because I have a daughter and son-in-law living in the Houston area. I found myself watching the weather channel to keep track of this storm and then watching Fox News as they started to cover it, as well. Here are a few of my (scattered) thoughts about this past week.

1. I noticed that race didn’t seem to matter at all during these past few days. Whether you were Hispanic, white, or black didn’t matter even a tiny bit as rescues took place and shelters were opened. No one cared. Perhaps this indicates that prejudice is not as big of a deal as the press would like us to believe. Do most people really feel a deep-seated prejudice towards other races? Oh, sure we may not understand each other like we should but do we really feel prejudiced? I just don’t believe that most do. Is it even possible that the press is fomenting racism with their constant coverage that aims to divide?

2. Tragedy brings out the best in people. There is nothing like a historical hurricane to remind you that America is a great place to live. As volunteers and resources pour into Houston, we can see that many Americans still care about their fellow man. It is an encouraging reminder for all of us.

3. I remembered why I don’t watch the news. I stopped watching several years ago now, after I realized that it affected my mood and also that the coverage was so biased and incomplete. I do watch a weekly 15 minute recap of world news by a YouTuber who puts clips together. This gives me a great overview of what has happened in the world over the past week. What I have found is that American news channels tend to be extremely myopic and selective in what they cover and there is so much we never even hear about that is going on in the rest of the world.

The other thing I noticed is that they thrive on debate. I just want to hear the news. I was disheartened to see Fox give coverage in the middle of all of this to a fireman who claimed that “Houston just wasn’t prepared for this like they should have been” and then ask a busy official his response to this fireman’s statement. Really? You would do this in the midst of all that’s going on? This was one of several times I saw something like this. It is my opinion that Fox News is just like every other news channel. They feed off debates and arguments and care far more about ratings than they care about the people they are covering. Sadly, this is what the news has become, no matter which way they “lean”.

4. And, finally, on a more personal note, it was quite challenging to be so far away from someone I love during such a time. As my daughter sent me photos and information about what was going on, I felt so helpless. Moments like these are so completely out of our control and they cause us to run straight into God’s sovereignty. I knew that I had to make a conscious decision to trust God for the safety of my kids and choose not to worry–not an easy task for someone prone to worry. And so I grew a bit in trusting God during this past week. And I was reminded that He loves them far more than I ever could. I once heard someone say something like this– “My kids are much safer in the Lord’s will far away from me than they are if they live close and are outside of His will.” So. True.

So there are just a few unrelated tidbits of thoughts I had about this past week. Let’s continue to pray for Texas (and the other states affected, as well) and offer to help however we can. They all have a very long road ahead of them.