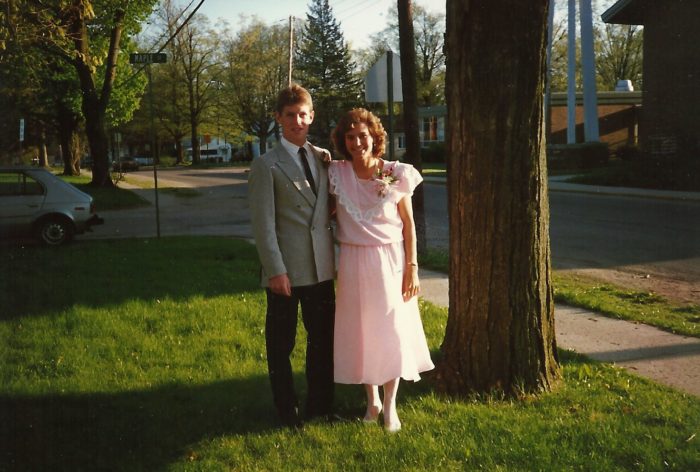 We dropped our youngest daughter off at college last week. Thirty-four years ago, I was the one being dropped off at college. I remember my dad loading everything in our red and white van and then our whole family, along with a favorite aunt and uncle, climbing into that van and heading west.

As a freshman, I was both nervous and excited. Mostly, if I am honest, I was excited about meeting some new guys and possibly (hopefully) meeting “Mr. Right”. In that era, girls were teased about going to school for their M.R.S. degree. While that wasn’t why I was there, I have to admit that I was harboring a hope that I would find my husband.

A week or two in, I spotted the guy while I was working in the cafeteria. I found out later that he was a sophomore majoring in Business Admin. He must’ve thought I was cute (so he tells me now) because he’d always be sure to pick my line and chat with me whenever he was in the cafeteria. But he had a girlfriend and another guy was showing interest in me and so that seemed to be where it would all end.

But it did not end there. I won’t go into all of the ups and downs of our next three years, but let’s just say I knew he was Mr. Right long before he knew I was Mrs. Right!

At the end of my junior year, we sat down and had a long talk. We decided to give it one final try. He would be graduating so this was it. We started to hang out together and he asked me to the Junior/Senior Banquet (the picture above is from that night). Ironically (and perhaps providentially), his family had recently moved a half hour away from my hometown and so he suggested we try dating over the summer to see how it would go.

Well, it went. Really well. And neither of us ever looked back. (Well, I might have taken a slight glance back after we were engaged. You know how you can do that sometimes when you finally get what you want? I found myself asking: Did I actually want this?? Is this really the guy I want to spend the rest of my life with? Happily after a day or two of doubts, I realized I most certainly did.)

Those two immature and naive kids got married and started a life together. We had absolutely no idea what we were doing. At one point, in our seventh year, we struggled so. We still don’t really know why. We had three kids and a young business. Life was crazy busy. And we just couldn’t get along. But we clung to our commitment to each other through that rocky sea and held on tight. And, soon enough, we were through it and on to calmer and sunnier seas.

We’ve had periods like that throughout our marriage. If you are married, I am sure you know what I am talking about.

So what makes certain people stay committed and others walk away? Why the raised eyebrows of surprise, the congratulations, and the “wows” when we say we have been married for thirty (or twenty or fifteen) years?

Because marriages that last are getting rarer and rarer these days. Many men and women don’t take their marriage vows seriously anymore and it has caused no end of hurt and pain. Especially when it is only one who decides to disregard those vows and their heartbroken spouse is left to pick up the pieces and try to make the best of it.

This year it has been especially evident as we have seen my father-in-law care for my mother-in-law through a difficult season of her health. He has been so dedicated to her and his love for her is so incredibly inspiring. (She actually has a pretty serious back surgery scheduled for this morning at 9am, so if you are reading this on the day that I have posted it, a prayer for her would be much appreciated!)

But, of course, sometimes it doesn’t work out like that, does it? I know that many of you already have kids with broken marriages and grandchildren with divorced parents. Perhaps you yourself are divorced. What then?

Well, the best news of all is that God is a God of mercy, grace, and forgiveness. Sure, divorce isn’t His best plan for anyone. But that doesn’t mean He loves you any less or that you have forfeited all of His blessing in your life. Divorce is not the unforgivable sin.

I don’t want to make light of it. We know that God hates divorce. But we also know from scripture (Matthew 5; 19; I Corinthians 7) that it does happen. And, so, at that point, we must pick up the pieces, deal with the consequences, and make the best of it, trusting God to see us through. Supporting and loving our children as they face the challenges and heartache that divorce brings.

I guess there are two–

First, if you are in a marriage where you are going through a tough patch, keep on keeping on. Do what you can to make it work. It might not be possible because you are only one person of the two involved. You can’t change that other person. But do what you can.

Second, if you find yourself in a situation where divorce is part of your life story– in whatever capacity– then know that God loves you and can heal your broken heart. Some of you may have great regrets about how you handled that first marriage or perhaps that you didn’t warn your child of red flags you saw in their future mate during the dating period. You just wish you could go back and change things. But it’s too late. Others of you just long for your spouse to turn away from sin and back to you and to the Lord. But you can’t change your spouse’s heart and desires and the whole thing seems hopeless. There are so many things outside of our control and we can’t put the sand back in the hourglass. And so we must move on, trusting in God to turn something ugly into something beautiful. One day at a time, one step at a time. Even when we can’t understand how He possibly could.

And here’s the thing– married, not married, divorced, remarried, single–we all have sins, temptations, trials, and problems. Some of the greatest trials and sins are unseen from the public eye. Even the happiest-looking marriages and families are not free from the effects of a fallen world.

How did I end up here when I started out talking about my anniversary? I am not sure. I feel such grief for several I know who are going through really hard times in their marriages right now. My heart aches for them and I so want them to know that they are loved and supported as they travel a road they never thought they’d take. One they hate with all of their hearts.

I am thankful for my marriage. And for my husband. If we have a spouse that loves us, we can be grateful. But let us remember our fellow brothers and sisters in Christ who are struggling in their marriages today. Let’s uphold them in prayer and give them lots of love. Because that’s what we should do in the Body of Christ.

6 thoughts on “Thirty Years In”