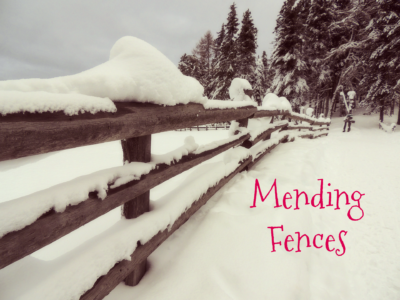 This is Part 3 of this year’s Christmas story. You know, we can find forgiveness from God for the most horrible of sins, but that doesn’t mean we don’t still deal with the consequences. One of the most devastating consequences of sin are destroyed families. And they are all around us. Join me today as we continue the story of two sisters who are struggling through this very thing. (If you have landed on this story for the first time today, you can find Parts 1 & 2 here.)

I have been wanting to write this letter for such a long time now. Nineteen years ago I sinned against you in a way that is truly unforgivable.

I cannot begin to tell you how many times I have wished that I could go back and change what happened. But, to my great sorrow, I can’t. I can’t fix it. I can’t change it. I can’t undo it.

But I want to ask you just one last time to forgive me. I beg you to forgive me for betraying you. I sinned against you in one of the worst ways possible and I have regretted it every single day since. But I love you, Evie. I always have and I always will. It would be my greatest desire to be sisters again.

I sucked in my breath as the tears rolled down my face. One of them dropped on the letter, smearing the E in my name. Should I write it again? I sighed and realized that I didn’t have the emotional energy to write it again. I shrugged my shoulders and folded up the letter. I stuck it in an envelope and then popped it into my purse. I needed to get her current address from Mom.
I didn’t even have my sister’s address. Oh, what a sad and sorry state of affairs. But with God’s help, perhaps we could start rebuilding this family. And maybe it would start with my letter.