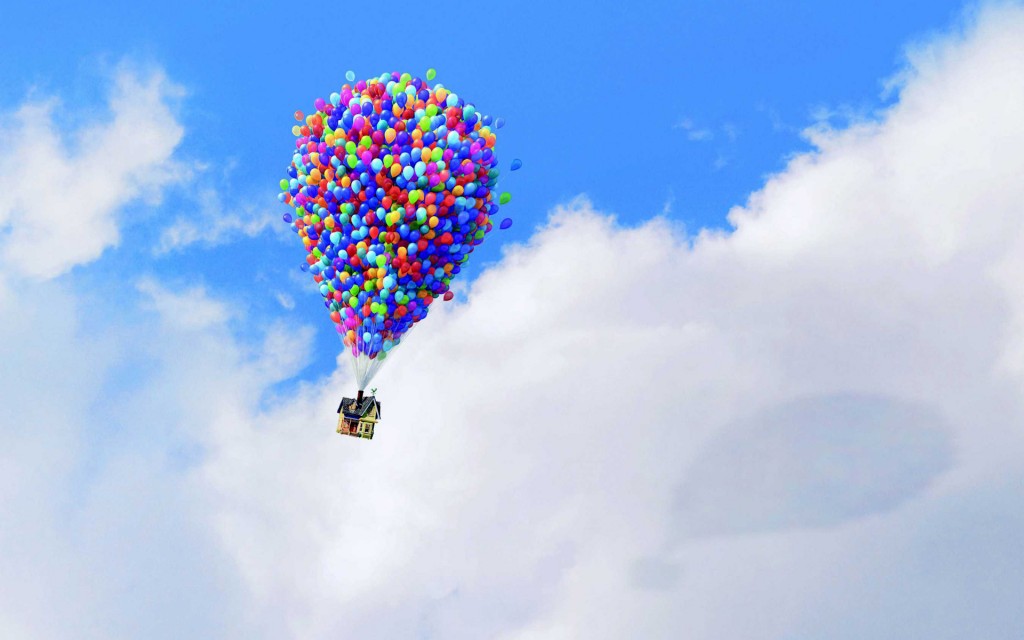 I love the movie Up.  It’s a movie for children but underneath all of the fun, comical nonsense there is a beautiful story that only adults understand.

The plot is about Carl, a  grumpy elderly man. His wife has died and construction crews have come in to demolish his home so that they can put up a high rise. Life is looking pretty gloomy. He decides he is going to take the adventure he and his wife had always wanted to take together and heads off to South America by attaching a gazillion balloons to his house. But he doesn’t count on Russell, a young stowaway. Their adventures are unrealistic and very ridiculous, and yet, so touching.

I hadn’t watched it for a long time, but someone was watching it when when I came home the other night. I was compelled to sit down and watch a bit of it. At one point, Carl, has finally arrived at his destination. He is ready to rest. But Russell has it in his head that he needs to save a very special bird that is being stalked by a very evil man and he takes off by detaching quite a few of the balloons from the house. Carl rolls his eyes and knows he has to go after him. So he tries to leave. But his house has too much weight for the balloons that are left and it won’t lift off the ground.

And so Carl starts taking his stuff from his house and tossing it on the ground to lighten it up. I don’t know how they can make a cartoon show so much emotion, but somehow they manage to make you understand that Carl is making the choice to remove the fetters of his past and move on to a new future.  He wasn’t erasing his memories but he was tossing the stuff that was keeping him so emotionally chained to the past.

And so out went his wife’s favorite chair and so many other material possessions that had brought him comfort, so that he could save the life of a small boy named Russell.

Wow. Did that scene hit me. Perhaps it is because of where I am at in life right now.  In a lot of ways, I have been hanging on to stuff. A lot of it. While some of the stuff is material, most of it is mental. Life has really been changing for me over the past year or two and I see much more change ahead.

But I guess in a lot of ways, life is changing for all of us all the time.  We have to always be very careful not to get too attached to the things of this world, whether they be material possessions, memories, or even people.

It reminds me of Hebrews 12:1.Therefore we also, since we are surrounded by so great a cloud of witnesses, let us lay aside every weight, and the sin which so easily ensnares us, and let us run with endurance the race that is set before us,

We can easily think of the sins that keep us from running a good race. But what are the weights we need to lay aside?  I am no theologian, but could the weights be things like memories and longings for the past and perhaps even frustration at the life we have been given?  These things keep us from running the best race we can run. Just like Carl could not move on to a healthy future with the weight of his past, neither can any of us.

The movie Up was able to convey that thought so beautifully. I don’t know what weights are holding you down. Life has a way of throwing us some serious curveballs sometimes. We can either accept them and move on or we can wallow in our longings for the way things were or the way we wish things to be. The choice is up to us. As for me, I realized I have some things I need to start tossing from my house, so to speak!