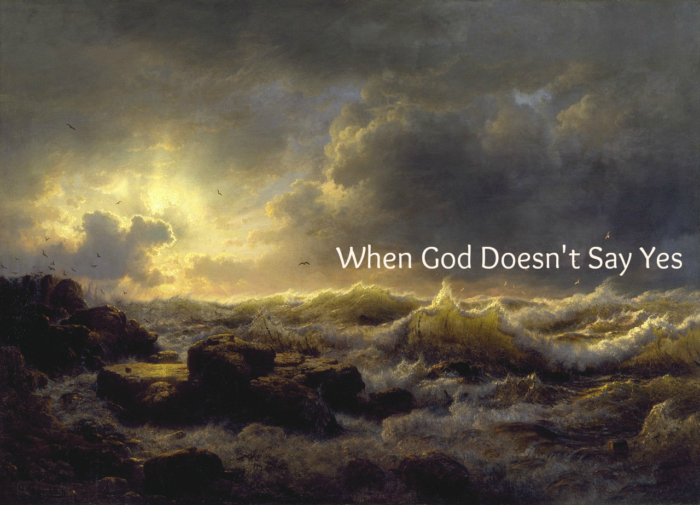 Do you think God is playing favorites when He heals some people and not others? Do you believe that you are somehow inferior spiritually if His answer to you isn’t yes?

While you might say confidently that you don’t believe that, I am afraid that sometimes we lean towards believing like this without really thinking about it. We feel forgotten and neglected and we think that somehow we did something wrong to bring on special punishment from God.

But this just isn’t true. While we do sometimes reap the consequences of sinful choices, not all bad things that happen to us or those we love have to do with our sin or lack of faith. And when God gives an answer to prayer that we don’t like it doesn’t mean He is mad at us. How can I be sure of this? Because the Bible tells me so.

If we take a walk through scripture, we pretty quickly see that many godly men and women were afflicted by many sore trials and tribulations. We all are familiar with Job, who went through terrible afflictions for reasons unknown to him at the time. We read of Jacob’s beloved wife, Rachel, who suffered with infertility and then died during the birth of her second son. We know about Ruth, who lost her husband and traveled with her mother-in-law to a foreign land, leaving behind everything she has ever known.

We read of Daniel and his friends, who were uprooted from their lives and taken on a pagan King’s order to live in his court. There they experienced many temptations and trials. God did not remove the trials, but walked through the trials with them.

We read of Jeremiah, who was God’s special prophet to the people of Israel and yet they hated him. They hated him so much they sought to attack him (Jeremiah 18:18) and put him to death (Jeremiah 26:24). He was speaking for God and was persecuted unmercifully.

As we move to the New Testament, we find countless more examples of godly people who endured terrible trials.  All of Jesus’s disciples except John were martyred for their faith. John himself was exiled to the island of Patmos, to live out the rest of his days far from his beloved home and family. Paul suffered many great things before finally being martyred by the evil Roman emperor Nero. (Read more about the apostles here).

I’ve only mentioned a few from scripture. There is not enough room here to mention every person in the Bible who suffered miserable trials and violent deaths. So why did God allow so much heartache and pain in the lives of those who were sincerely seeking to follow Him? Was He angry at them? Did He want to punish them? Or did He have other reasons?

The answer, of course, is yes, there are other reasons and no, God isn’t mad at us. I believe this biblical answer is two-fold–

First, God is God and will do as He pleases for His glory and His purposes. We grow proud and insist that we must understand the “why”.  If we can’t see how it is all working together then we assume it must all be pointless and cruel.

But Isaiah 55:8-9 reminds us that God’s ways are higher than our ways–

Deuteronomy 29:29 also puts us back into our place as loyal subject and servant to the Great and Almighty King of the Universe–

The secret things belong to the Lord our God, but those things which are revealed belong to us and to our children forever, that we may do all the words of this law.

God is God. We are His to do with as He chooses for His own purposes. We can submit or we can rebel. But it doesn’t change the fact that He is the King of all Creation. And He uses many things to accomplish His purposes, including disease, death, and tragedy.

Second, if we are saved, this world is not our home. As believers we recognize that we are simply pilgrims in a foreign land. We are weary travelers that have much to look forward to. Our best life isn’t now but is still to come! Hebrews 11:13-16 reminds us of this so beautifully–

These all died in faith, not having received the promises, but having seen them afar off  were assured of them, embraced them and confessed that they were strangers and pilgrims on the earth. 14 For those who say such things declare plainly that they seek a homeland. 15 And truly if they had called to mind that country from which they had come out, they would have had opportunity to return. 16 But now they desire a better, that is, a heavenly country. Therefore God is not ashamed to be called their God, for He has prepared a city for them.

Notice the first sentence of these verses: These all died in faith. Every one of them died, just as every one of us will, as well. We are born to die. It is life in this fallen world. But those of us who have faith, have a very different future ahead of us. For we have defeated death! (I Corinthians 15:55-57) And we desire a better, heavenly country.

When we turn our focus to our eternal perspective, it changes how we view temporal trials. Oh, it doesn’t take the hurt away but it is a comfort. Our trials are temporary and serve a greater purpose–one that we cannot always see or understand. And we realize that the entirety of our life here on earth–all of the joy, the pain, the pleasure, the sorrow–is but a moment in our eternity.

From studying the scriptures we recognize that trials are a part of life. All lives. And that a godly person is not released from them simply because they follow Christ. But we also can see in His Word that God hasn’t left us without hope. He walks with us through the trial, giving us abundant grace and bountiful mercy.

Sometimes we ask for the storm to calm or the trial to cease but God chooses to say no. This doesn’t mean He has deserted us or is angry with us. Instead, we can confidently know that He has a higher purpose and we can be assured that He will walk with us every step of the way.

So why do some people still insist that when God tells you NO you must be a weak Christian?

Nothing in scripture would indicate this anywhere. So we have to assume they are getting this vain philosophy from the teachings of man.

And, actually, we don’t have to dig very long before finding it. A quick google search revealed several sites run by familiar names and ministries that insist that it is God’s will to physically heal all sick Christians, while deplorably mangling God’s Word in their attempts to back up their premise. This is a blatant falsehood that is slithering its way even into the evangelical church. It is most disturbing because it is NOT TRUE!

I just want to conclude by encouraging you to stay in the Word. There are so many false teachers out there and if we listen to them we can grow quickly discouraged. Is it not incredibly disillusioning to believe that we will be healed if we have enough faith–and then not experience healing? How many seedling faiths has Satan destroyed by this devilish movement?

By doing so, we can quickly identify that healing is not always granted. We understand immediately that Christians aren’t promised to be free of trials. (In fact, if anything, they are promised extra trials and persecution for following Jesus. John 15:20). And it’s only through knowing the Word that we can recognize if what is being said to us is twisted, out of context, and inconsistent with the rest of scripture. It truly is our only protection.

And so what does scripture have to say about my initial questions? Is God playing favorites when He heals some and not others? We know without a shadow of a doubt that the answer is NO. And are you spiritually inferior if God says NO to your prayer for healing or relief from a trial? And, of course, we can answer that with a rousing NO, as well.

We can rest assured that God deeply loves us and holds us in His hand–no matter how He chooses to answer our prayers. I will end with these very encouraging verses from Psalm 37:3-4–

The steps of a good man are ordered by the Lord,
And He delights in his way.
24 Though he fall, he shall not be utterly cast down;
For the Lord upholds him with His hand.