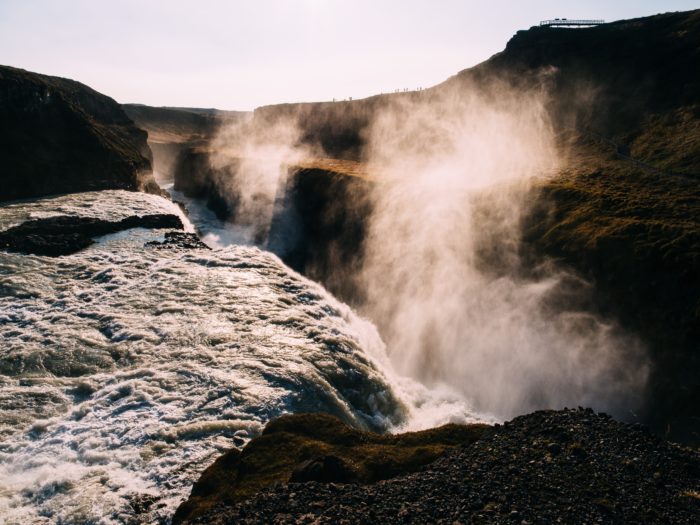 There was once a young man. We will call him Jack. Jack had a job. He needed to deliver a letter to the old man who lived at the top of the mountain. No one had ever climbed the mountain before. He wasn’t even sure the old man was there. Years before the old man had started to climb the mountain and that was the last anybody had heard of him.

Jack decided the easiest way to reach the top of this mountain would be to fly there. So he talked to Hampton, the only man who owned a helicopter for miles around. It was a beautiful day when Jack and Hampton climbed into the big whirlybird and took off for the far away mountain. But the strangest thing happened. As they neared the mountain, it was covered in clouds. Not just any clouds, either. These were thick, gray clouds. Clouds that covered the top of the mountain like an opaque blanket. Hampton was puzzled. It was a beautiful day. This didn’t make sense. We will return on another day, he said. The clouds can’t remain forever. So they returned the next day. And the next. They continued to try for two weeks. No matter what the weather was when they left, the clouds would always be covering the mountain when they flew over it. Jack decided that flying was not going to work.

The next option was taking a mule with a pack. It wouldn’t be easy. But that was really the only other option. He bought himself a good, sturdy mule and started out. He did fine. Until it started raining. It rained and rained. Deep gullies started to form. The mule lost his footing.  He went tumbling down over the cliff. Jack grabbed a branch and hung on for dear life–until slowly he was able to  inch his way forward to safety.

At this point, walking was his only option. He looked down at the cuts and bruises on his body. He was in some pain. But he decided to continue his journey. He did make it about halfway. At that point, wild creatures started appearing. There were venomous snakes. And huge, brown bears. And wild, frightful wolves. He contemplated turning around. But he knew this letter was a matter of life and death. He had to deliver it. He continued.

He thought he was making progress. Until he came to the crevice. A wide, wide crevice that surrounded the entire mountain top. There would be no way to cross it without losing his life. Dejectedly, he turned around.  There must be a way to reach the old man. But he couldn’t figure out what it was. He headed back down the mountain.

When he reached the bottom of the mountain, much to his surprise, the old man was waiting for him. The old man had heard about the letter, knew the one and only way down the mountain, and had come to meet him, so that Jack would be spared the dangerous trip up the mountain.

So what is the purpose of this story? I hear so many cries of “all roads lead to heaven”, “all religions are the same”, “you take your way to God, and I will take mine”. But did you realize that all world religions–except for Christianity–are like Jack trying to climb that mountain? There are things you must do in order to reach God. And yet, nothing we do makes it possible to reach God. We can do all the good in the world and still never reach Him. (Romans 3:23). Anytime you must DO something in order to reach God, it is a false religion. We can’t reach God. But the good news is that He has come to us by sending us His Son to die for our sins (John 3:16). I can’t do anything righteous in His sight (Isaiah 64:6).

You see, Christianity is the only world religion where God came down the mountain to us. Not to receive something from us. But to give something to us. Salvation. A free gift.

But what about all of those rules Christianity has? You see, there is great confusion about the holy lives genuine Christians seek to lead. I John 2:3&4 says “Now by this we know that we know Him, if we keep His commandments. 4 He who says, “I know Him,” and does not keep His commandments, is a liar, and the truth is not in him.”

A life honoring to God is the proof that we know Him. Not the requirement.

I do not look at my life like I am living a life of rules and regulations. I do not think I am missing out on the “good stuff”. I am so grateful to my Heavenly Father for sending His son to take on my sins so that I can stand righteous before God that I surrender my life and my will to His. At least that is the goal of every true believer. We are still human and we do still make lots of mistakes. But we are doing our best to live a life to please God because we love Him. It is the natural outcome of the praise and thanks in our hearts toward the God who has saved us from eternal damnation.

So, all roads do lead to the same place. All roads EXCEPT for Christianity. Christianity is not the same as all other religions. It is entirely different. You can be doing all you know to do to reach God, by doing good deeds, reciting whatever it is your religion requires you to recite, by proselytizing, by praying to the saints, or whatever else your religion “requires”. But God has already made a way. By sending His son to die on a cross and take on the sins of the world. By rising again in glorious splendor to show that there is power over death!