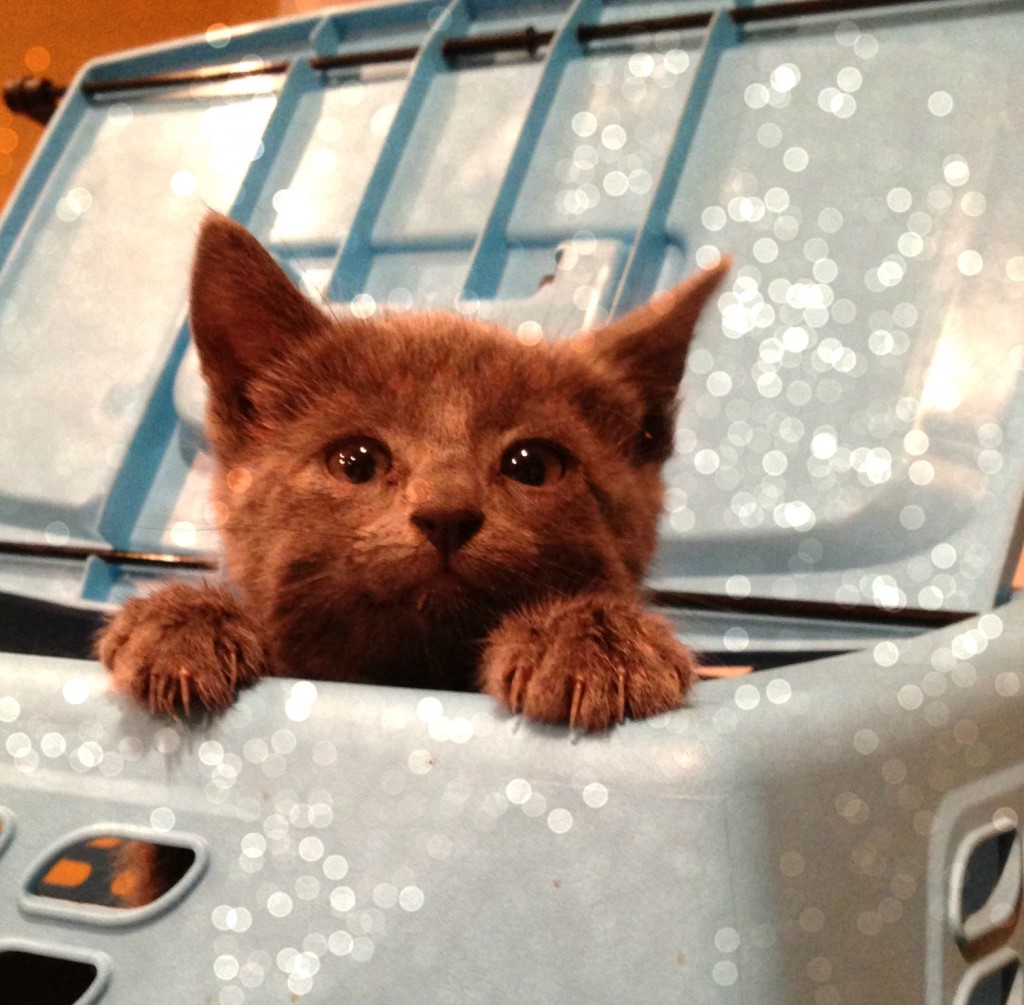 There are some stories in life you could not possibly make up. We experienced one of those stories this weekend. It all started with the sighting of a kitten.

It was Saturday morning and my husband had decided to clean the garage that morning. A few minutes after he got started, he walked into the house and announced that we had at least one kitten staying in our garage. A streak of black had rushed by his feet in the midst of moving things around but he couldn’t find it now.

I was more than a little dismayed because A)  We have no official cats anymore, B) I was really looking forward to having birds around to feed this year, now that we have no official cat, and C) I’m not a real big cat lover and I knew the inevitable outcome of combining a motherless kitten with the nurturing 14-year-old that resides in our home.

At any rate, thus began the search for the black kitten that had been spotted.  The kids could not find it  and at lunch the announcement was made that there was probably at least one more–maybe even more. Oh, great.

The kids enthusiastically renewed their efforts to find the kittens as soon as lunch was over.  I cleaned up the lunch dishes and then went to check and see how the hunt was going. I saw my son, my oldest daughter’s boyfriend, and my 14 year old daughter all gathered around the back corner of the garage. Apparently they had found the kitten. But it wasn’t the black kitten. It was a gray kitten.

The poor animal had backed itself way back under the step and the kids were having a very difficult time getting it out. It was hissing and using its sharp claws to defend itself. The little thing was scared to death and had no way of knowing that we were not the enemy.

Finally, my son donned some work gloves and with the combination of a few long-handled tools and the gloves, they were able to pull it out.

At first, it threw a fit, clawing and biting, but surprisingly, it settled down into my son’s arms within a matter of minutes and lay there just as if she was used to people. She was really skinny and rather pathetic-looking but her striking gray eyes and gray fur led me to believe that she had the makings of becoming a very beautiful cat–and for me to say that is something, because I am not a huge cat fan (as already mentioned earlier). The one peculiar thing we noticed was that she did not have a tail.

Our daughter excitedly grabbed our prior cat’s crate and set up a little home for it. She googled kittens so that she could care for it properly and also googled “cats without tails” to try and solve the mystery of this lacking body part. (She came to the conclusion that it must be part manx cat. Who knew??)

As she carted that crate around the rest of the day, she and the other kids would search for the black kitten every so often. It had been last spotted headed up the attic steps in the back of the garage. There is no door to get to the upper level, so it was probably in a hiding spot among our Christmas decorations or boogie boards.

The kids would search but they just couldn’t find it.

After discussing it, we had finally made an educated guess as to how the kittens had come to be in our garage in the first place (although we will not truly ever know). Because we live next to our business with its large shop and various outbuildings, we do have cats around here. They are wild, mangy creatures who help control the mice population and forage in our dumpster. We co-exist peacefully –they keep their distance and we keep ours.

A few months ago, however, a black cat had started showing its face during the day and the office girls had named it Nevin. One day they watched it walk towards our house. It started making this journey several times each day until finally they concluded that Nevin must be a girl (Oops! Oh, well, they weren’t changing its name now!) with a litter of kittens somewhere in the vicinity of our home. And so we had gone searching for them. That had been at least a month ago and we never did find them. Until Saturday. It might be important to note here that Nevin has not been seen for the last few weeks, either, which would explain the kitten’s skinny, starving body.

Okay, now back to our ongoing search for the missing black kitten–

Sunday dawned as a lovely, cool autumn day. After church, Eric searched for the missing kitten once more but with no success. Meanwhile, the little gray one was just eating up all of the attention she was getting and had quietly settled into her {temporary} home.

Around 3pm, my oldest and youngest daughters decided to go on one last search for the missing kitten. I didn’t think too much of it as I sat reading on the sofa.

Until I heard an urgent voice calling my name.

Now what I expected to see was a mangy, sick kitten. I sat unresponsive for a nano-second, gearing myself up to save the kitten for the sake of my girls (wouldn’t be the first time) when, all of a sudden, I heard words I had never expected to hear.

“The poor thing hung itself on the volleyball net. It must have gotten so worked up and flustered that it just kept pulling the net tighter and tighter around itself until it choked itself to death.”

I felt sick to my stomach. Even though I am not a great lover of cats, I wouldn’t wish this on any animal. The poor, poor thing. If it would have just come out when we called to it. But instead it had cowered in fear and eventually grew so frightened that its manic, crazy actions had actually caused its own death.

I just couldn’t help but make a comparison. Do you see where I am headed?

Wow. It couldn’t be any clearer. The tiny gray kitten fought and scratched but eventually submitted its will to the girl who truly cared about her.  She was able to find food and water and a warm bed, where before she had only known starvation and a cold concrete floor. But it’s tiny sibling was not so fortunate. He had lived a {very} short life of great fear and had ended up sacrificing his own life because of it.

We do the same thing, don’t we?

We don’t trust that God knows better than we do and we stay hunkered down in our corners, on the concrete floor or caught in a net, starving, dying…unwilling to let the God who loves us provide for us a much better life.

And, yet, if like that gray kitten, we would settle down and rest in the will of our Heavenly Father, we would be amazed at the love and joy and peace that would flood our existence.

Why can’t we see it?

Why couldn’t the black kitten see it?

I don’t know. I don’t know why some see and others don’t. That is a question only God can answer.

But what I do know is that submission to God leads to indescribable peace and joy and protection.

The safest place to be is living a life of submission and obedience to God and His Word. We need to trust Him wholly and completely. He knows best.

Tis’ so sweet to trust in Jesus
Just to take Him at His Word
Just to rest upon His promise
Just to know, “Thus saith the Lord”