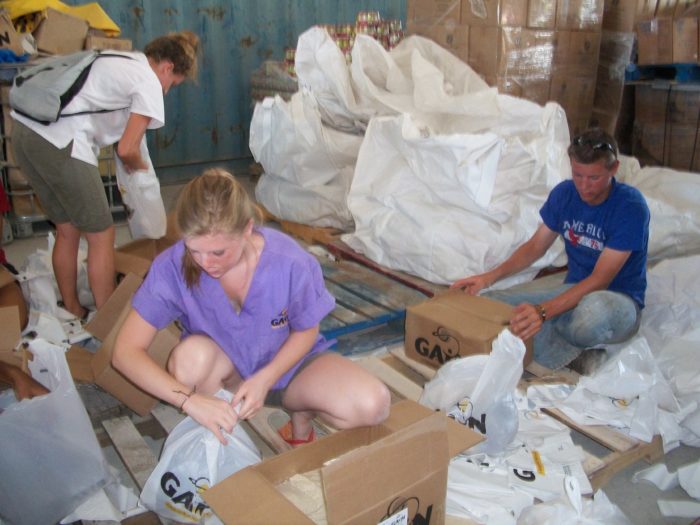 I spent last week in Haiti with my family.  When we arrived at Port Au Prince, it was with great fear and trepidation, as none of us had ever been to a third world country.  As we traveled from the airport to the compound where we were to stay, our eyes beheld unbelievably sad conditions.  From the makeshift tent communities set up everywhere to the little boxes they called “bathrooms” to the men standing on the streets because of a 75% unemployment rate.  It was hard to take it all in.  As our eyes scanned the countryside, we saw half built buildings, the place where they buried 200,000 victims of the earthquake in a mass grave, and cattle, donkeys, and goats anywhere and everywhere, all with their ribs clearly showing.  As we observed, we talked about the hopelessness we saw in the country. Can this country ever be “fixed”?

But during the course of the week, we realized that our job (and the job of the missionaries serving there) is not to fix the country.  It is to share the gospel and minister to our fellow brothers and sisters in Christ.

It reminds me so much of that story where the the father and daughter were walking along the seashore among thousands of stranded sea stars.  The father started throwing them back in the ocean one by one.  The little girl looked at her father and sadly said, “you aren’t even making a difference”.  And the father, with great wisdom, replied: “it makes a difference to that one”.   I thought of that story often this week.  It makes a difference to that one.  We were there to minister to whomever God put in front of us.  In is His sovereignty,  He knew whose heart was ready to hear the gospel.  He knew who needed encouragement to keep going.  Because He knows everything.

And the interesting thing was…while we were there to minister to the Haitians, they in turn ministered to us.  The joy in the lives of the Christians there is a wonderful thing seldom seen here in America.  The warm hugs given without reservation to a stranger would be unusual here.

Sure, they have lots of problems, even in their Christian communities.  And only being there a week gave us little insight into the working of the communities.  But it was with great humility that I observed the grateful eyes and heard the soft spoken “mercis” with which they took a bag filled with rice and beans that would feed their family for at least a month.   And I felt great shame over the things I find myself complaining about.   We are living so far above survival here in the states that we have lost track of what truly matters.

You see, life is really not about us.  Most of us Christians will walk around saying that with our mouths…but do our lives match our words?  I know that I, personally, love my comfort zone.  But what if that comfort zone is not where God wants me?   Are we willing to go where He asks?  Whether it be to a different country,  the inner city here in America, or to bring foster children into your home?  What are YOU doing to further God’s Kingdom?

Luke 12:48b says “For everyone to whom much is given, from him much will be required; and to whom much has been committed, of him they will ask the more.”  No matter your economic status here in the United States…even if you are on welfare…you have more than 80% of the rest of the world.  You have been given MUCH.  What are you doing with what you have been given?  It is a question that should truly be considered by all of us.