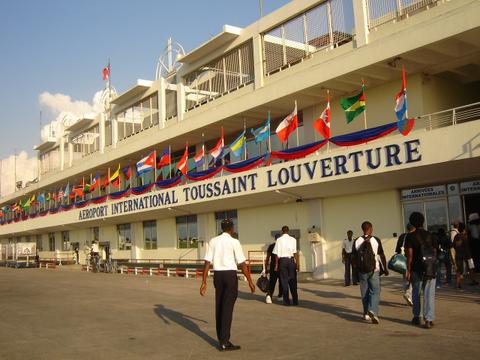 Our family observed the goings-on in the Port-Au-Prince airport around us with wide-eyed wonder. We stepped into the main building to hear a cacophony of voices in an unfamiliar language. We joined the mob waiting to go through customs.

As we looked around us, we saw black and white mingled together in one great mass of humanity. The place was hot and dirty and disorganized–nothing like any airport we had ever seen. We saw groups of matching t-shirts, signifying missionary or human aid groups coming to help the needy of that land. We saw Haitians coming home for a visit or perhaps returning from a trip to see a relative in America.

After what seemed like a very long time, we approached the customs officer. He took one look at our forms and handed them back to us. As we tried to understand the issue he was having with our paperwork, we were finally able to figure out that the problem was our daughter’s form, which she had completed in pink ink. He deemed the pink ink unacceptable, handed us a new form and a black pen, and shooed us off into a corner to re-do it.

Eventually, all six of us made it through customs and stepped into the area where we would find our luggage. Here, we found ourselves surrounded by pure chaos. Dark-skinned men moved with purpose, shouting to each other in Creole. The stench of body odor filled the air. We saw some travelers knowingly push through the pandemonium.  But other faces mirrored our own–lost and bewildered.

A man came and grabbed my husband by the arm. He steered him through the crowd to an area where he had all of our pieces of luggage gathered together. He clearly expected to be paid for this service. While it was a relief to find our luggage had all arrived safely, we would have preferred to find it ourselves in the good ole’ American way. But here we were.

My husband looked at me with a question mark in his eyes. I just shrugged my shoulders. I didn’t know how to handle this, either. The man who had gathered our bags took the $20 bill Eric held in his hand and then promptly turned it over to another man standing close by. He explained that this was his helper and he would split that among his other helpers. He then asked for money for himself. At that point, we just wanted to get out of there, so Eric gave him a $10 bill he quickly found. The man grabbed it and then took us outside to be handed over to more luggage handlers (or shall we call them money-grabbers?)

Do you know that by the time we reached the doors, the word had spread that quickly that rich, dumb Americans were on their way, that we were absolutely mobbed?! Like bees on a hive, we were swarmed by men of dark color, all grabbing at pieces of our luggage. There are some things you will never forget in life and this would be one of them. We had a vague notion of where we were supposed to meet our contact and so we clung tightly to our luggage as we walked uncertainly in the most likely direction. If it wouldn’t have been so frightening, it would have been quite comical.

By the time we were walking through a shade-tarped tunnel on the sidewalk, the money-grabbers had succeeded in taking the handles of some of our luggage. They would hold on to it for a short bit and then pass the luggage on to another man who would grab it. We were in shock–and, if I am honest, quite fearful, too. Finally, about half-way through this tunnel to the parking lot, a man told us that he knew “Jim”, the man we were supposed to meet. What a relief! Here was someone who could take us to the man we were looking for! We gladly surrendered our bags to him and he, quite characteristically, demanded money for the privilege of doing so. By that time, my husband had had enough. He handed him $10. The man argued that he had many men helping him and would have to split this teeny amount among them. After handing him $3 more, Eric looked at him and said “Enough!”  with a firm determination. I think the man knew he wasn’t getting more and turned around and started pushing our luggage to the end of the tunnel where we met Jim.

We left that airport $43 poorer. We found out later that the Haitians make a fraction of that amount after working a whole month! No wonder everyone wanted the privilege of handling our luggage!

Our ignorance had left us at a serious disadvantage. We left that airport poorer but quite a bit wiser. I guess that happens to all of us. But it is important we learn from these life lessons. I don’t think we will ever return to the Haitian airport and spend $43 again. But, if we ever go again, we will be prepared for the chaos of the airport and also have small bills in our hand instead of $20s and $10s.

We have to learn from life’s lessons or we are bound to repeat them.

But it is even better if we can learn lessons before it costs us. This can often be done by observing and talking with those around us.

I think this is especially true for young people. Older folks have learned so many costly lessons in life. There is great wisdom in old age. Life’s experiences teach us so much. Instead of scoffing and belittling those of old age, we should, with great respect, learn from them, so as to avoid the mistakes they made. Many parents and grandparents would appreciate the privilege of sharing some of their life lessons, if simply given the opportunity.

Let’s stay humble and teachable, no matter what our age, and in doing so, spare ourselves much pain and anguish. We will never be able to totally avoid trouble, of course, but in learning from others along the way, we can make our lives so much easier.

On this particular occasion, we learned our lesson the hard way.  Of course, in the process, we made some Haitians very happy!