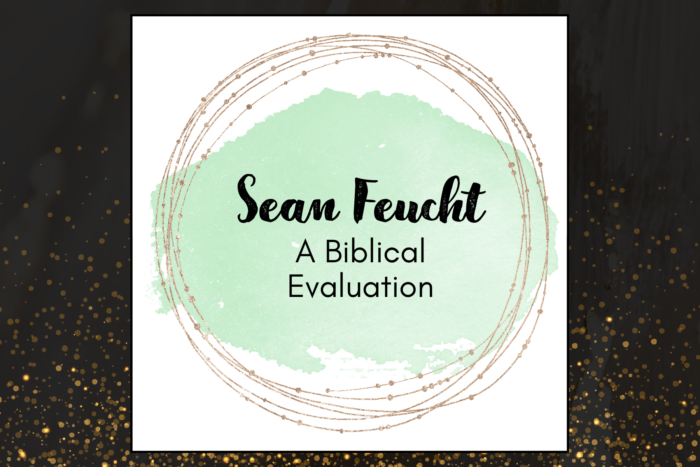 There are two sides to what is happening right now. I’ve warned you of both because both the Great Reset side and the Great Awakening side are clearly NOT movements of God. We can know this only one way and that is through evaluating what is taking place through the lens of scripture. One is harder to discern because it uses biblical terms and throws Jesus’s name around as if He approves of what they are doing. Let me assure you, He does not. I know this only because what they are saying, teaching, and who they are joining up with just doesn’t align with the Word of God. And, again, I want to mention here the Bible is our only anchor. Without immersing ourselves in it and knowing it, we will grow confused and we will be deceived. Hang on to the Word of God as if your life depends on it. Because your spiritual life does depend on it.

One of the leaders of the Great Awakening side of things is a guy by the name of Sean Feucht. If you’ve been paying attention to this movement at all you will recognize his name. If you haven’t, then he may be unfamiliar to you. I first became familiar with him when, last year, an acquaintance mentioned she was going to one of his gatherings. I researched him a bit and knew that something was off right away.

Because he continues to grow in popularity, my daughter, Jess, decided to feature Mr. Feucht on her “Warning Wednesday” over at Anchor for the Soul (find on Facebook here and on Instagram here.) Because it’s hard to find information on those platforms, I am also sharing what she wrote here on the blog where it can be linked to, shared, printed, and filed.

Hope you find this helpful as you search out what is truth in a world that is overcome by falsehood. Here’s what Jess discovered about Sean Feaucht–

Sean Feucht (pronounced Foyt) is an up and coming leader and celebrity in mainstream Christianity. If you haven’t heard of him, I’m sure you will in the near future. He is an alumnus of the Bethel School of Supernatural Ministry and a worship leader at Bethel Church in Redding. He is the founder of Burn 24-7- “a global worship and prayer movement” and Hold the Line- “a movement seeking to rally the church to vote and stand up for causes of righteousness and justice in the governmental area.” He is currently on a “Let Us Worship” tour to various cities in the US. These events are supposedly worship sessions that bring miracles, healing, and revival.

So why am I warning you about him? In a dark world where most want nothing to do with the things of the Lord, isn’t it good that people are attending these worship sessions and supposedly getting saved? Well, no. Because the Lord requires us to do things His way. We have to worship His way. We need to share the gospel His way. We have to look at miracles, healing, the Holy Spirit, God’s presence, and revival through the lens of Scripture. So let’s look at the ways Sean instead does things his own way and in complete opposition to the word of God.

𝐇𝐞 𝐩𝐨𝐢𝐧𝐭𝐬 𝐩𝐞𝐨𝐩𝐥𝐞 𝐭𝐨𝐰𝐚𝐫𝐝 𝐭𝐡𝐞 𝐰𝐨𝐥𝐯𝐞𝐬. Sean Feucht calls people like Beni and Bill Johnson of Bethel his spiritual parents and Mike Bickle of IHOP his hero. He has ministered alongside other false teachers such as Shawn Bolz, Cindy Jacobs, Lou Engle, and Kris Vallotton. If Sean Feucht adhered to Bible Christianity, he would not be pointing his followers toward these blatantly false teachers and movements.

“He that is not zealous against error is not likely to be zealous for the truth.” – JC Ryle

𝐇𝐞 𝐠𝐞𝐭𝐬 𝐰𝐨𝐫𝐬𝐡𝐢𝐩 𝐜𝐨𝐦𝐩𝐥𝐞𝐭𝐞𝐥𝐲 𝐰𝐫𝐨𝐧𝐠. Sean bases his ideology on worship on passages from 1 Samuel 16:1, Amos 9:11, and Acts 15:16. In Samuel, Saul was troubled by a distressing spirit and David was called into Saul’s presence to play his harp. The distressing spirit departed whenever David played. Amos 9:11 is a prophesy about the restoration of the tabernacle of David, when the Messiah will personally reign over the nations upon the Throne of David during the Millennium. Acts 15:16 quotes the the prophecy from Amos. Sean twists the meaning of these passages to fit his own misconstrued idea of worship.

He wrongly assumes from the passage in Samuel that David “changed the atmosphere” over Saul when he played. He recently posted: “I felt this SO STRONG yesterday. The Davidic worshippers were playing…and you could literally feel fear, heaviness and oppression falling off people in that moment!⁣ ⁣Could this be the hour the worshippers and musicians were born for? Is this our hour to write, play, sing and create sounds like David did that changed the atmosphere over Saul? ⁣I SAY ITS ON!”

Sean then reads extra-biblical meaning into the prophecy in Amos and Acts. He claims his worship movement is a direct Biblical fulfillment of the restoration of David’s tabernacle. God “told” Sean that worship will unlock the key to revival in this country. Apparently that revival will come through a kind of restored worship that purportedly occurred in the tabernacle of David.

Beyond the fact that his interpretation of these passages is flat-out wrong, the repercussions of this type of teaching is dangerous and far-reaching. He (and other charismatic leaders like him) believe that worship actually accomplishes something in the spirit world. Rather than worship directed to God simply to express praise, Davidic worship is practiced in order to produce a so-called spiritual effect. It attracts God’s presence and therefore results in manifestations of His power- miracles, healing, and the immediate deliverance from demonic oppression and addictions.

This is NOT worship according to the Bible. God is always present with His children. The Holy Spirit dwells in us. We have no need to pursue His presence. Worship does not unleash some kind of power for miracles and healing and other nonsense. God will heal according to His will. He breaks down the power of sin through the Gospel and transforms lives through the power of His Word, not through some sort of hours long worship service.

𝐇𝐢𝐬 𝐦𝐞𝐭𝐡𝐨𝐝 𝐨𝐟 𝐬𝐡𝐚𝐫𝐢𝐧𝐠 𝐭𝐡𝐞 𝐠𝐨𝐬𝐩𝐞𝐥 𝐢𝐬 𝐚𝐥𝐥 𝐰𝐫𝐨𝐧𝐠. Apparently the gospel is shared at these worship events. That’s good, right? But here’s the thing. God’s Word is clear on the way we are to share the gospel: through the preaching of His word and the Holy Spirit working in the hearts of those He calls. I watched one video of an altar call at his worship event and it was all I could stomach.

It was all emotional manipulation. I saw the leaders on stage singing and shouting and jumping around. They counted to 3 then yelled at the crowd “runnnn! come down, come down, come down!” over and over as swarms of people ran to the altar to be saved or healed or delivered. The leaders shout that these people are being delivered from their oppression and addictive behaviors miraculously and instantaneously. They lead them in a quick and simple salvation prayer. They state that thousands of people are saved at each event. It’s revival! But is it?

True saving faith doesn’t occur as a result of emotional manipulation from people shouting, jumping around, and playing music that makes everyone feel some spiritual high. None of that is from God. It results in most of those people saying a prayer or having some type of spiritual experience and then walking away thinking they’re headed for heaven when in reality they’re still headed straight for hell. Did they repent? Did they realize they’re sinners? Did they hear the full and complete Gospel? Were they reminded (as Jesus, Paul, Peter, and James and so many others reminded people over and over again) that the gospel will cost them? That Jesus didn’t come to fulfill their dreams and make them happy? Before these people go home, are they connected to a church that will disciple them and help them to grow? The answer is no.

𝐇𝐞 𝐩𝐫𝐞𝐚𝐜𝐡𝐞𝐬 𝐚 𝐰𝐫𝐨𝐧𝐠 𝐯𝐢𝐞𝐰 𝐨𝐟 𝐫𝐞𝐯𝐢𝐯𝐚𝐥 𝐚𝐧𝐝 𝐀𝐦𝐞𝐫𝐢𝐜𝐚. Sean is convinced that revival is coming to the United States. He claims that Donald Trump is the Christian leader that will bring America back to its Christian roots and purpose. He believes in the “7 mountain mandate” – the idea that the church will take over the various realms of the Earth and bring heaven down. Government is one of those realms. And so he’s patriotic and conservative and anti-leftist, anti-woke, and anti-government oppression. He’s attracting lots of people from the right side because of this stance. But he completely ignores what the Bible says about the last days and the return of Christ. It’s not fun to say, friends, but we shouldn’t be expecting some great end time revival or for things to be looking increasingly better. Heaven isn’t coming to Earth. It’s not what the Bible predicts. Can the Lord save souls in a revival during this time? Absolutely. He can do whatever He wants. But it will be with the true Gospel and through His prescribed method. And it will likely never be a revival of the masses because He promises the way is narrow, unpopular, and that there are only few who find it.

I could go on but those are the main reasons I’d warn you stay far away from Sean Feucht and anyone like him. These worship movements aren’t harmless. God isn’t in heaven just waiting for a worship event to manifest His power. They are simply giving people a spiritual experience- one that leaves them feeling good for a moment but leaves them trapped in sin. Stand on His Word, my friends. Compare everyone and everything to its standard. As the christian world gets crazier and crazier, it is truly our only anchor.