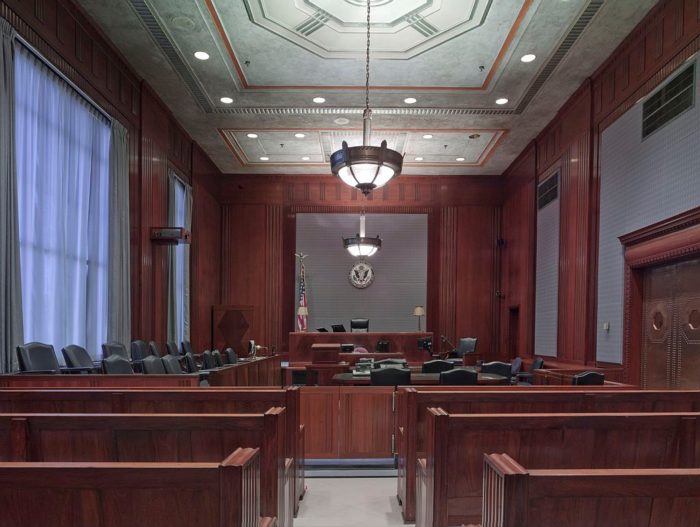 A few months ago I got the letter. I was called to serve the county as a juror by showing up at the Courthouse at 8:15am on Monday, February 4, 2019.

I sighed. Jury duty is such an unknown. Will it be for one day or will it be for two weeks? It had been quite a few years since I had been called and my memory was not serving me well. I really didn’t know what to expect.

But whatever I did expect was nothing like what actually happened–to say the least. But we will get to that.

A month or so after that first letter, I received another letter. “You do not need to come for jury duty until Thursday, February 7, 2019.” I was so excited. I didn’t know why they changed it, but that meant I got half of my week back. I thanked the Lord and prepared to go on Thursday.

Going into a room of strangers and having to come to a consensus on a decision with them is not my idea of a fun time so I really wasn’t looking all that forward to this. But Thursday came and off I went to the County Courthouse to do my civic duty.

Here are a few things I learned that day–

1. I can live without my cell phone for a whole day. The first thing I saw when I arrived was a sign that said “Absolutely no cell phones on Floor___”. Ughhh. Now the day was going to be realllly long. I traipsed back to the car and said good-bye to my connection to the outside world.

After it was all over I realized that, not only did I survive a whole day without my cell phone, but I actually kind of enjoyed it. There is something extremely freeing about being without it. I do appreciate my phone and the communication it allows me with family and friends near and far, but to take a break for an hour or two or eight is definitely not a bad thing. It is truly amazing how your concentration level deepens without that thing calling your name all the time.

As I headed back to enter the building, I ended up behind two twenty-something girls yacking away. They lead me to my second lesson…

There were two rather elderly people manning the security and, although friendly enough, they moved about as fast as molasses in the winter. They pulled things out of purses, requested the girls remove their cigarettes from their jacket pockets and a few other various items; unhurriedly putting some of the unapproved items in plastic bags and tagging them for pick-up on their way out. It felt like an eternity. At this point, I am noticing that I am the only one in line behind them. All the other jurors must already be in place. I had no clock but I knew time was ticking away. When I finally rushed upstairs, I found my room and hesitantly entered, expecting to be greatly frowned upon for my tardiness. It was then that I learned another lesson…

3. Friendliness goes a very, very long way in setting people at ease. I walked in the door to receive a big smile from the lady there. “Hello, can I have your name?” She kindly joked and made conversation with all of us sitting there so stiffly and, in so doing, washed away a great deal of the nervousness most of us were experiencing. I knew the importance of friendliness before that day but it was a definite reminder that this goes a long way to make people feel at ease and cared about.

And, as believers, who should be more kind, thoughtful, and generous than we? It always greatly pains me to hear that so many in the world view Christians as unfriendly, stingy, and mean because of how some Christians act. How tragic! Today, let’s determine to be friendly to that mom in the store with the screaming toddler or to the grumpy store clerk. Let’s be extra-kind to the irritating co-worker or the mean neighbor. Let’s give a decent tip to that waitress who works hard for a low wage, depending on tips to make a decent living. And–perhaps the hardest thing of all–let’s treat our families with kindness and courtesy. Let’s not be one thing when we are out and another when we are at home. A real challenge, for sure, and one I am sure we all need to work on, but so very important. But I digress…

As we all sat there, the judge came in and told us that we would be serving as jury on a civil trial and it was a bit different than normal. Along with this information, he assured us that we would only be there for one day. I thanked the Lord right there and then (silently, of course!) I was just so relieved. And then the judge started asking a few questions. Does anyone know anyone related to the case? Did they ever hear of this case? A few raised their hands and were excused to leave. That left twenty of us. We walked into the courtroom to take some questions from the lawyers. After they had asked us questions, a few more were excused to leave. That left fourteen. At that point, the judge asked us if any of us would like to be excused due to personal convenience or schedule. (I mean..yeah…I wanted to go home, but I didn’t really have a pressing reason…) None of us raised our hands. “Okay, then we will just have fourteen on this jury. Let’s just pull up two more chairs.” Uhhhh….what..??

Which leads me to my next lesson…

4. When your mind raises a question it is probably for a reason. It was around this time that my mind started to turn. Either things had drastically changed since I was here the last time or there was something unusual about this case. It just didn’t seem quite right. I think this is often how God gets our attention about a false teacher or teaching. Our mind raises a question but we squish it down. Instead of researching and looking for the truth, we just ignore it and hope it will go away. Unfortunately, those questions often do go away, and in that process, our discernment muscle becomes weak and useless.

Okay, so back to the story…

Without giving too many details, the case was one where all fourteen of us had to come up with a single amount of money to award the plaintiff.

We spent the entire morning listening to both sides and then it was lunchtime. They brought us subs which we ate in the actual courtroom while we deliberated and tried to come to an agreement. We had about an hour and ten minutes to agree on an amount. Thankfully, in civil cases, you only need a majority. We needed 12 of us to agree. Doesn’t seem too terribly hard, right? Which leads me to my next lesson…

5. Every single person is remarkably different with greatly varying life experiences. Again–I knew this. Very well. But I was reminded of this as recommendations were hundreds of thousand dollars apart and consisted of everything in between. That was because everyone came at it from different perspectives. We finally were able to get nine of us to agree. But there were five more who wouldn’t budge. They felt very strongly and they refused to move even an inch. I started to realize that we would probably be there for most of the day and great frustration started to settle into my heart. It was just about that time I learned another lesson…

6. Just when you are ready to give up hope, there is light. Oh, this doesn’t always happen, of course, but, eventually, there is a little light or a silver lining or a bright spot that helps carry us on in a hard time. In this particular case, just when we were ready to throw our hands up in despair at ever agreeing, the judge came in and told us we don’t have all day (?? Another indication that this was not a normal trial!) and that we should all fill out these little pieces of paper with our juror number and the amount we thought should be given. I wrote down what I truly believed was the right thing to write down and I thought that was that…

However, I had one more important lesson to learn…

7. Be ready to defend your answer. Would I have written down the same answer if I knew I was going to have to give my reasons for writing it? I think I would have because I believed it to be the best answer, but I would have definitely thought twice.

But let me back up for a moment. We filled out our little papers and went back to our seats in the jury box. Those involved in the case gathered back into the courtroom. And then the judge proceeded to read each juror number and their answer.

It was around that time that the judge finally filled us in on what was going on. It was a new-ish thing to do–at least in our county–and had only been done a few times before. I am not sure of the real title of it, but it was like a “mediation trial.” They had gathered a jury to hear the case and to give their opinions, in order to give both sides a “reality check”, as the judge called it.

It is actually a fantastic idea. Instead of taking three to five days to listen to testimonies of doctors, police officers, and others involved (along with wasting hours of time and thousands of dollars) we listened to one testimony and saw two PowerPoint presentations. From this we made our decisions and these decisions were read by the judge. He was going to then take both parties, now that they had heard realistic settlement amounts, and try to come to some kind of settlement with them. It was a rather old case and I think all parties involved were ready to wrap it up.

After he had explained this to us, he did something else very unusual. He allowed the lawyers to ask the jurors questions. He even asked us one or two himself. It was completely unexpected but also very interesting. It was at this time that I was asked why I had written the specific amount that I had. I had to explain why I had written what I had written. I did feel like I gave a decent answer and I do hope they found it helpful.

But this made me think of how often we say or do things without being able or ready to give a defense. Especially as believers we should be able to take people to the Word and explain. It reminds me of I Peter 3:15–

But sanctify the Lord God in your hearts, and always be ready to give a defense to everyone who asks you a reason for the hope that is in you, with meekness and fear;

And, there you have it. An unusual day in the life of me. Thankfully, before we were excused the judge told us that this did count as official jury duty and we wouldn’t be called for another three years. Whew!

10 thoughts on “What I Learned from Jury Duty”